Okay, technically he's not 5 till tomorrow, but whatever, we don't post on weekends anymore. Now, I know that a large number of our recent hits have been for Tara's post on the Royal Wedding, which is probably happening as you read this, so if I don't mention Kate, Will, and all the royal partying, we'll probably be missing out on a lot of traffic. Besides, I'm totally pulling an all-nighter to watch it online (since I have all kinds of knitting left to do on this sweater for my best friend's impending offspring, I might as well watch something). And, I gotta admit it, sometimes I get all girly and I want to see the dress!

Ahem. Okay, end of digression. Back to my fabulous feline. So, meet Durwen. Officially his name is "Zanadu Durwen", 'cause that's the breeder I got him from (yeah, the "Z" is on purpose, the "X" spelling was already taken or something), and his middle name is Socks, 'cause he has pretty white feet even if they don't match. Oh, he's a Birman, which is why the matching-feet thing is a big deal. Wanna see him? Here's my boy: 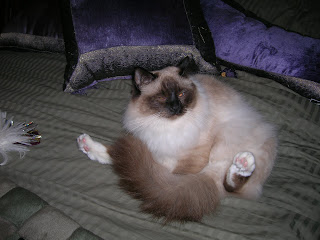 Heh. Oops. That's the Playkitty pose... Right, let me find you a better one. *snicker* 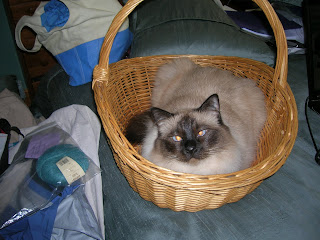 Yeah, that one's much cuter. So, the story of Durwen: Once upon a time, when I was 19 years old, I got permission to move out of the dorms and into my very own apartment. This was a big deal. I immediately contacted a Birman breeder ('cause I'd always wanted one) to reserve a kitten, so that my original kitty-baby, Kiffie (the Fabulous and Awesome!) could have some feline company when we moved into our very own place come August. Fast forward a few months, and by a complete fluke of something (genetics? environment?), every kitten in the litter I had a reservation for turned out with show markings - perfectly matched gloves and laces, Roman noses and unkinked tails. I was willing to shell out $400 for a kitten, but $1500 was just not going to happen. So I got Rullie instead - rescued her from the crazy lady at the garden centre (don't ask...). And heeeeeere's Rullie! 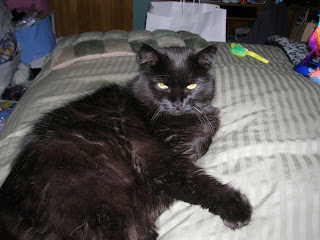 Pretty girl, yeah? Don't let the bitch-face fool you, she's become quite a sweetie in her later years here. So for 8 years it was me and Kiffie and Rullie, three girls all together. When the amazing and wonderful Kiffie-cat passed away of kidney failure, however, I needed a new buddy. Well, actually I cried rivers for weeks and I'm still tearing up as I type this 'cause I miss my girl so much, but Rullie was moping around big time and really, she's the one who needed a new buddy. Wanna see Kiffie? Of course you do. 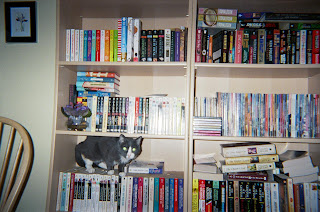 Wicked super cute, huh? (Don't think she could fit in there now though, there's approximately another thousand books crammed into those cases {no, I'm not exaggerating in the slightest}). Right, so anyway, I did the Great Google Search for Birman breeders within a 10-hour drive from Boston, found one with seal point boys who'd be ready to be adopted in the time frame I needed, and lo and behold, I found myself in southern Ontario one August morning throwing a hand-knitted catnip hackeysack into a pile of kittyboys to see who'd come up with it. Durwen was the winner, so he came home with me - he was quite well-behaved for the first few hours, got him over the border with no problems, and then he decided to cry non-stop for over four hours. I was ready to tear my own ears off by the time I got him back to Boston... Here he is on his first night at home: 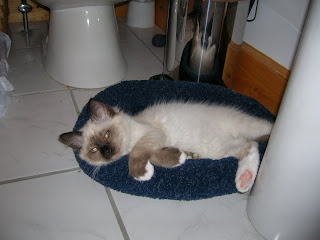 And so began a highly rewarding and very fuzzy friendship. He's sometimes the world's biggest lovebug, all super-snuggly and hugs and kisses; sometimes he's the world's biggest PITA, biting my feet or scratching things he's really not supposed to; he's always entertaining though, especially when he dances. Happy birthday, Durwen!

I've just outed myself as the crazy cat lady, haven't I?

Email ThisBlogThis!Share to TwitterShare to FacebookShare to Pinterest
Labels: Cats, Leanne Rabesa, Who am I? Friday

I'm glad you used the word "kitteh" instead of "pussy" because that might have been awkward. My mother would have made that mistake. She still uses the word "gay" to mean "so and so is happy". It's so awkward.

Has it really been that long? Gosh that mean we've known one another at least 6 years. or thereabouts!

Marjorie - yep, I remember when you only had 3 kids!

But I thought *I* was the crazy cat lady of The Burrow? *pouts*

I want to steal your kitties.*nods*

Happy birthday, Durwen!!! Lucy, My 3rd kitteh, was largely because Bernie was so sad when Gretta disappeared, so I know that tune... Lucy ruled our roost...

Happy bday to the kitteh!

Tara - sheesh, we can have multiples, can't we? ;-) How's your conehead doing?

Tami - yeah, teh kittehs needs teh companies. Not sure I could have a singleton, I'm out too much. Besides, the more the merrier! Errrm... up to a point, anyway...