Shot Heard 'Round the World

So for those of you who are up on your American history, you already know that it was on this date that the opening shots of the American Revolution were fired - you know, Lexington, Concord, midnight ride and all that jazz. Officially, that makes this the state holiday known as Patriot's Day. Of course, it just wouldn't do to have a holiday on a Tuesday - no long weekend! The horror! So it was observed yesterday instead, along with another long-standing Bay State tradition, also involving a gun - actually, make that a starter's pistol. That's right, time once again for Marathon Monday here in Boston.

Don't be getting any ideas though - I didn't run it, and likely never will (I managed about two miles last night before getting distracted by some friendly terriers who liked the way I smelled... or something), but I'm an enthusiastic spectator, along with about 500,000 other folks. After all, with 26+ miles of course to stand along, you can pack in a really big cheering section!

So, a little more history, this time race-specific. This year marked the 115th running of the Boston Marathon - it's the oldest annual marathon in the world, started in 1897 (after the first Olympic Games in 1896). For those in the know, just qualifying for it is a huge accomplishment - you can't just sign up for this one, you have to prove you can run the thing fast enough that you won't still be bumbling along the course when it gets dark. Of course, there are those that do fundraising for various charities and win a spot that way; and then there are the bandits, runners who aren't registered and don't get an official number but jump in along the way (some of them in outlandish costumes designed to get attention from the crowd - I kid you not, I saw a guy in a lobster suit one year). For those runners with really good qualifying times - like, have-a-shot-to-win-it times - there are the Elite categories, who get to start at the front of the pack (in the case of the women, about a half hour earlier) so they don't have to shove through everyone else. Oh, but I shouldn't forget that not everyone is running - there's a sizable wheelchair category too, most of whom are self-propelled, but then there are the Hoyts. You may have heard of them; Dick and Rick Hoyt are a father-son team, and Dick pushes son Rick's wheelchair (he has cerebral palsy) - frequently beating most of the "regular" runners, who aren't pushing a full-grown man in a chair! Talk about inspirational.

Anyway, I also wanted to mention a couple of friends while I'm at it today. First off, happy birthday to my college roommate, Emi, who is the world's biggest sweetheart and a damn good violinist too - just wish she lived closer than Switzerland so we could see each other more often! And another violinist, my old friend Margaret, who not only ran the Boston Marathon but did it from the Elite Women's group, finished 31st, and had a time of 3:04:02 - but not this year. She ran that time in 2004, the year she died attempting approximately the same distance, except across the Grand Canyon. So I miss them both today, for different reasons. 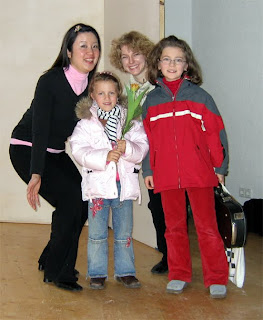 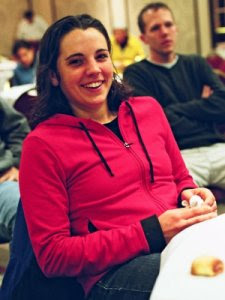 Emi (far left) with students
Margaret (right) after a race


Oh, you probably want to know who won the Marathon yesterday, huh? Geoffrey Mutai set a new record of 2:03:02 for the men, while the women's winner was Caroline Kilel. No surprises that they're both from Kenya (that place turns out serious runners!). For the wheelchairs, Masazumi Soejima took men's honours, while countrywoman Wakako Tsuchida won her 5th straight title - and goodness knows the Japanese could use something to celebrate, so good on them! But hey, the race is on Patriot's Day (errrm... observed), so it might be nice if an American won it once in a while. Got fairly close this year, 2nd place woman, 4th place man... well, there's always next April!
Posted by ViolaNut at 12:00 PM

And I don't want to do it again.

All week, my runner's group has been talking about nothing else. His timing, tail wind or no tail wind is something else!

And one can't keep wishing Margaret had stayed away from the Grand Canyon :-(