So I've got this roommate, right? (Well, actually I've got two of them, but whatever.) And it's her birthday today. So the other roomie and I (see, this is where she enters the picture) were clearly having some sort of mind meld and we both decided to give her Doctor Who-related gifts ('cause she likes that sort of thing). (Yes, I know "mind meld" is a Star Trek reference, not Doctor Who; I'm a TV idiot, but I've managed to pick up a little bit.)

Anyway, I am pretty freakin' broke right about now, so the only presents I've been giving for quite a while are the ones I can make myself from stuff I already have in the house. Mainly, this means I'm doing a lot of knitting, sewing and cooking. However, this strange Aussie chick called Briony (about whom you may have read right here on this very blog...) posted a knitting pattern on my Facebook several months ago which was entitled "Extermaknit". If you know anything about Doctor Who, you know where this is going. Uh huh. That's right. I knitted a Dalek. 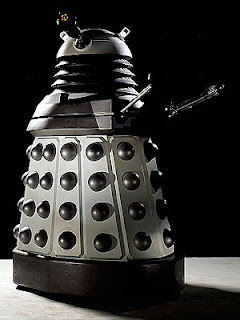 I must admit that some of it was rather amusing - it's not every day that your pattern has headings like "eyestalk" or additional instructions like "you can also stiffen it [the arm] with wire if necessary, as long as the recipient is old/human enough not to poke his/her/its eyes out with it." The bobbles (which I am reliably informed are called "Dalek bumps") were kind of a drag though, they take forever. Still, I have made this thing, despite having only seen a handful of episodes myself (I'd probably love it, honestly, but I really don't need another obsession right now). Oh, you'd probably like to see it, huh?

Yeah, sorry about that... camera issues. You'll just have to take my word for it. And that, I suppose, is the most delusional thing about this post. No wait, I lied - I forgot to tell you what the other present is. It's a Sonic Screwdriver.

Call me crazy, but it really looks like a - erm - we're supposed to be more or less family-friendly 'round here, aren't we? Well, if you're hanging around us, you can tell exactly what I'm thinking right now and probably giggling at the inherent bad pun. Screwdriver? Really? Hoo boy...

Leanne - I HAVE TO SEE THESE. For the love of god, take a picture with your phone or something. I love the doctor and I like weird knitting - this is extremely neat.
so pictures unless of course you made the whole thing up. You did didn't you? dang.
Jan Morrison

Yes, they do look a wee bit like those things that supply endless innuendoy comments...

Erk, it's Friday tomorrow!! I'd lost track of the days because my shifts were different this week. I have a 'Who Am I?' post to write!! Double erk!!!

*cracks whip to self*

Jan - I didn't make it up, and I DID take a picture, I just can't find the cable to transfer it to the computer. :-P Bah humbug. I'll look again after work.

Tara - we should put one in the rude tree. *snort*

Dalek's are some of the coolest bad guys in all of sci-fi.

Please post the picture. My daughter just sent me the pattern for knitting a Darlek washcloth, and I'd love to retaliate with your pattern, any hope of putting the link up somewhere?
It's a show worth becoming obsessed with!

Michael - so I have been informed. Especially now that they can do stairs. *snort*

Sue - still working on the picture (erm, make that looking for the ^*&%^& cable) but the link to the pattern is now inserted into the post!

Yeah, I hafta see pics too... and I need to get Dr. Who on my list... Have you ever knitted a Cthulu... I love this, though--talk about a perfect birthday gift--MADE and totally personal. And yes... I think I need to order a sonic screwdriver...