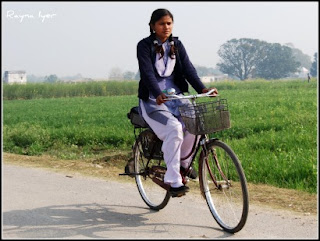 In a Burrow full of scatty people, I must be the most scatty. For some strange reason, I thought I was doing Reading Monday this week, and since I didn't have any fresh ideas, I was planning to review Nick Kristoff's 'Half the Sky'. Turned out my calculations were wrong- it was not a Reading Monday, but a Topical Tuesday post that I was supposed to do this week. So I decided to post what I was intending for yesterday today, since it is equally relevant as a "Topical" topic.

To be absolutely honest, I picked up the book, because my boss asked me to read it. I did so against my will, because I have never had much patience with people who advocate woman's rights while employing young girls to mind their own kids. I realised the need for empowering girls, but thought education and economic independence were the way to go about it. I genuinely believed that if we could keep girls in school, many of our problems would automatically get solved in a generation. 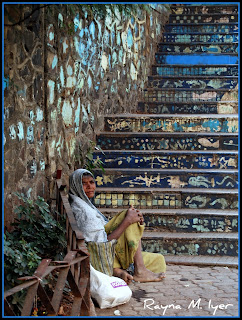 When I got the book, the cover nearly put me off. It was sprinkled with quotes by Angelina Jolie, George Clooney and Khaled Hosseini; did the author really need so many celebs promoting his book? Couldn't the book stand on its own merit, presuming it had any?

But then Melinda Gates was mentioned as saying "Both a brutal awakening and an unmistakable call to action, this book should be read by all.", and she is a lady I admire a lot. I overcame my objections, picked a chapter at random, and started reading.

After just 15 minutes, I put it down. I. Just. Could. Not. Go. On. The book was too real. How could the author speak so unemotionally about female candidates wearing extra pairs of stockings, so they could delay if not deter the rape that their political opponents would order to 'teach them a lesson'? Could those statistics on the number of girls having their first initiation to sex through abuse be true? Were areas so unsafe that women would actually wear a tampon-like attachment that would function like a zipper if they were sexually assaulted? Were there areas where women went into the forest to fetch sticks to burn, knowing they would be mass raped if seen (they prefer not to send the men, because the men would be killed, while they are "only" sexually assaulted)? Could the punishment for relatively minor transgressions ever be the ritual rape of unmarried relatives? What was the mysterious value of a woman's hymen that everyone seemed to want a share of it? 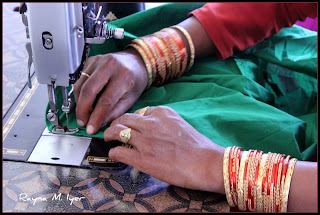 It took me over a week to read the book. A month after finishing it, I am still trying to digest it. And I am not sure I will ever come to terms with it.

But a month later, I can honestly say that though I was not even aware of the magnitude of the problem, the solution remains the same - educate and empower girls and women. Because when a woman is educated, she can assert herself more, and when a woman is economically empowered, the money goes doesn't get spent on drink and other women.

I don't want to read this book as i'm already so pissed off. but if you think it would cause me to do anything more helpful than what I'm doing (supporting education of girls) then I will. I'm afraid of the anger I often feel.
love you sister for sharing this. and I don't mean women's lib sister, I mean sister of my heart.
Jan Morrison

Wow. It does sound like very difficult reading. Important, but difficult. I wish more of the population was capable of reading this as the call to education and opportunity, as you say, instead of amunition to religion bashing, which is what I know would happen to it in many parts of the US (even though I am positive these women don't all live under the same religious teaching.