I've read a few books recently that made me think 'I wouldn't have thought you could get away with that' but it TOTALLY worked for the story being told... in fact the books were stronger for it... so I thought I'd review those, plus a few read longer ago that share that quality of 'an unusual voice' for the narrator.

Blood on the Ice by Ian T. Healy

I ended up with this one because I know the author and was saying my usual spiel about a lot of self-published books not being ready. And I admit, I had to take it back in this case... though I can see several reasons he would have trouble with traditional publication. Let me e'splain...

Plot Summary: The Fighting Aardvarks, a sub sub pro hockey team in British Columbia has just traded a player, and Digger, the new guy... is a Vampire... as, one by one, he begins turning his teammates, it sends them on a winning streak, but Hammie, the very likeable, very realistic MC, doesn't really think they really ought to be giving up their mortal selves...

This is not your normal Vampire book... it is laugh out loud funny in a lot of places—not terribly scary, though there are definitely tense moments. The relationships struck me as far more realistic than you normally see in literature... the CLASSIC Jewish mother (but not overdone), the (goth writer wannabe) girlfriend a slightly insecure guy could really end up stuck with... The romance is subtle and definitely only subplot. And at the start of sections, the narrator speaks directly to the reader—typically a no-no (though try telling that to Tolstoy or Hugo... and more recently, Zusak... reviewed below).

There is a twist likely to offend people who take their Christianity too seriously, and so I definitely don't recommend this book to that group, and the hockey detail might be a bit much for people who have never watched or played—a fair bit of the action is on the ice, but I think for other people looking for a really entertaining romp of a story, this was a really fun read.

[published as eBook only, but also very affordable. At $2.99 it's a bargain] 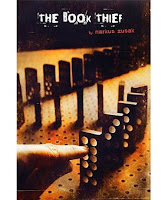 The Book Thief by Markus Zusak

Death follows the life of a young (orphaned?--we don't learn if her mother survived, but she certainly disappears) girl through her early life in war-torn Germany. And lest you misunderstand... yes, Death is the narrator— in first person. And the girl becomes a book thief... and in the process, makes a great friend and learns to love people both wonderful and complicated.

It took me several dozen pages to quite catch the cadence of this... Death doesn't speak like other people, but once I did, this book is beautiful, poignant, heartbreaking, and triumphant. It is a very cleverly woven tale with a lesson about the price of doing what is right, and how you just really ought to do it anyway.

The Graveyard Book by Neil Gaiman

This was my first Gaiman adventure... he's been on my list for a long time, and I finally decided this was where I wanted to start.

The book starts with a man murdering a family... lovely... but the toddler, who likes to climb out of his crib and go exploring, has disappeared... into a graveyard. The spirits of the graveyard feel sorry for the tyke... you get the feeling they have some idea of what's going on... so they take the boy in... give him the rights of the graveyard. He has a family of sorts, and a guardian who is more corporeal than the rest and can come and go. He is given the name Nobody Owens and his life is an odd one indeed. He is not a ghost, but having the rights of the graveyard means he can pass through things a normal person can't. And most people don't see him.

I loved this tale that had both darkness and humor—sweetness and conspiracy. It is all the things I really love, and yet they are so rarely seen together.

Man or Mango by Lucy Ellmann

This one was recommended by my friend Mark--

The plot of this is so scant as to barely be there (love lost, mourned—a lot, found), but the character philosophizing and meandering are deeply engaging. It really almost read, to me, at least, like a humorous philosophy book. I found myself laughing delightedly a lot—the settings and occurrences are bizarre—over the top—but somehow that lends itself well to the way the characters act and think. I really enjoyed the ride.

I have also loved Skinny Legs and All and Even Cowgirls Get the Blues, but the former takes a particular flexibility of mind and the latter, an indulgent sexual attitude, so I think Jitterbug Perfume is his most approachable and fun one. Of all authors on the planet, if I could hang out with one for a lost weekend, Tom Robbins would be him.

So there you go... when you are in the mood for something a little different from the norm...
Posted by Hart Johnson at 12:00 PM

Thanks for the review!

Now I want to read all of these books and see what there is to learn from them...

Sarah-YAY! I've influenced someone! (I take my joys where I can)

I have not read any of these books and I absolutely love Neil Gaiman. I read Coraline long ago before it ever became a movie.