The Burrowers are a friendly lot, for the most part, and we have made MANY fabulous bloggy friends, but it is always delightful to find someone several of us have stumbled upon independently, though in this case, it's possible I was following Cruella around (she's hipper than me). Whatever the case, Mark is one of those who seems to have won each of us over individually, and for his Quiddity, which if you follow Jan's Blog, you learned just yesterday is like that extra UMPH in eccentricity. Mark's take on the world is delightfully self-deprecating, alternately sarcastic and wise, and Mark is a SCOT! (it's a little-known fact that we Burrowers are trying to collect Scots.)
Mark writes novels, but in the process, has had prolific success publishing short stories. They are unerringly amusing, sometimes bizarre, but in a way that makes you chuckle to know there are people more wacky out there than EVEN YOU (I might be projecting). At other times you laugh at the blatant beam of light shined on the innermost insecurities of us all. Mark is fearless (and fabulous—and because I know him, he is alternately blushing and trying to talk a lovely young woman into bed over such praise).
Whatever the case, Mark's Blog title, The Quiddity of Delusions makes him a PERFECT candidate for a Delusional Thursday guest! Without further ado (or I suppose you may add as much ado as you like), Welcome, Mark! 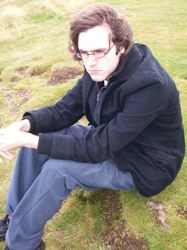 March of the Malformed Nazi Lepers
M.J. Nicholls
I sat down to write this post on delusions. I was ready to discuss how black is white, chalk is cheese, then I realised something – I have no delusions. I am a stubborn realist prone to exaggeration. I know that terrible things occur on a frequent basis to nice people, and when these things happen to me, they are the worst things to ever befall me-kind. Dying of starvation in shop doorway? That’s nothing: I HAVE ULCERS! LOOK, THEY’RE BULBOUS AND SORE! OW OW OW OW! HERE, HAVE A BUN.
So the delusions I have are ones of exaggerated suffering. I bloat things up until they’re pufferfishlike, distorted and spiky, likely to cause a nasty existential splinter. Let me run through the main offenders.
I have constant phone paranoia. There are only two reasons people phone: they want something from you, or someone has died. The first category contains such people as gas and water and council grownups who want money. They want to talk to me about my bill, how I actually owe them an extra £100,000. Did I not read the small print? Do I have a good lawyer? Well, DO I? People only phone when there are problems. How much nicer to receive a call that says: “Well done for paying your bills on time, Mr. Nicholls. What a punctual payer you are! My, you are a furry sex mongrel in those trews!”
Then there’s the death calls. Brr-ing brr-ing. Your mother’s dead. Come on! Why can’t people email me death notices? Maybe with a Jpeg of a funny kitteh to cushion the blow? Wouldn’t life be easier if we balanced the shit with the cute? For example: there’s a tornado heading your way. But look at this ickle puppy in a hammock! Aww! Or: I’m afraid it’s cancer. But isn’t this singing cat adorable? How do they get him to do that? Aww.
I don’t want people to phone me, mail me, talk to me. Speak to me via email, and you’d better attach a funny limerick if you’re sending me a typhoon of shit-to-deal-with.
Some might say forging a ‘career’ in print is a delusion. But I can’t subscribe to this view. See, it keeps me sane. It stops me strangling my neighbours and weeing on their baubles. I am furious, absolutely furious, at how sparse opportunities are for writers. FURIOUS. Every day, I wake up to the fact working at Sloppy McBurger is a wiser fiscal move than writing. Writers are treated like malformed Nazi lepers on a daily basis by swaggering cocks with MA Media degrees, semi-literate cash-slurpers and loving partners. In no other walk of life are people expected to work on the sly, to steal time, to sacrifice so much. You wouldn’t get a Starbucks server working as Professor of Latin in his spare time, would you? Or a Subway sandwich monkey moonlighting as Prime Minister? We should be given GRANTS and MONEY and SUPPORT and HOUSES from our snob-mob leaders, we should be given RESPECT and BARRELS OF LOVE. Wow. This really is delusional.
Our craft is not properly rewarded. We toil for years on our first novels, funnelling thousands into MAs and tutors and PhDs, then after years teabagging agents and secretaries, we get published by Fat Sparrow Books in Nowhere, Georgia. Then our books get reviewed by some illiterate chimp on Goodreads, that big One Star hanging over our books, and those little words: “I couldn’t really get into it. I couldn’t really get into it.” YOU COULDN’T GET INTO IT? DO YOU KNOW HOW MUCH I’VE SUFFERED!? YOU LITTLE FU—
At least in Subway, you make a sandwich, make a sale, have a happy eater. It takes twenty seconds. At home, you spend weeks on a story, weeks re-writing it, then send it out to tiny e-zines. Months later, when you’re living in a ditch in Berlin, a publisher sends you an email saying: “Liked it. Will publish.” Then you’re in a magazine no one reads, being read by nobody, your words fading into nothing. It’s a wonder we bother at all. When I think of giving up, I remember the alternative: there is no alternative. This is what I’m good at. I can make a good omelette, but mainly writing is what I do. Yes, I’m screwed. Would you like onions on your sandwich, sir?
With two notable exceptions—Joanna Lumley and Anna Ford—all human beings are wrong and should be stopped. I propose a national Let’s Die Inside day, where everyone downgrades themselves completely, ripping their character to shreds, breaking down in tears. I do it every morning. It’s very therapeutic and gives you great self-assurance. The ones who can’t complete the exercise will be exterminated for being arrogant egotistic twerpsicles who don’t deserve the boats of oxygen they steal from the neurotic.
There is no reason to be a self-possessed, confident and sassy individual. There is no reason to wear smart clothes and make clever quips and listen to Razorlight on your iPod nano. You are a monkey if you think otherwise, and you will be stoned summarily. It’s only through our begrudging tolerance of each other that we remain peaceful. Remember, it doesn’t take much to mutter those five little words: I hate you. Go away.
[Thank you Mark! That was fabulous!]
Posted by Hart Johnson at 12:00 PM

If it's not Scottish, it's shite! Slainte.

I don't know about COLLECTING Scots, exactly... I really only need one. ;-) Loved it!

Leanne-yes, I knew you were looking... Huzzah for boys with bagpipes!

(Although those of us who work in bookstores and have to look for your books are happy to pretend that we've read it and that it's "excellent" as we speed-read the back and make up all sorts of things if it will JUST. SELL. THE. BOOK. Because we've got poems to write when we get home and we need to get paid.)

Poets. The only form of life lower down the food chain than novelists. *g*

I fully agree the phone is an invention of demons, however. Although the picture option does afford me occasional messages with cute photos of my adoptive nieces, nephews, and cats, so it's not all-bad.

Hello commenters! Thank you for humouring this delusional ranting fool. I'm off for a bath with Nabokov. Cheers.

It comes to something when a blogger's comments are almost as entertaining as the posts themselves...

Who am I kidding? The comments *are* as entertaining.

How do we love Mark? So very much. He makes us simultaneously laugh out loud while also quelling an urge to fly to Scotland and remove sharp objects from his vicinity. He is a writing god, that boy.