I'm pretty sure I did a 'Topical Tuesday' post quite recently, as I seem to remember wondering what the heck I would do for it. Ok, so I usually wonder what the heck I'm going to do for all of my blog posts, but that's neither here nor there. Anyway, with all the serious stuff that is going on at the moment, there is no shortage of topics to choose from.

In Britain, there is the current high profile murder investigation to fill our news bulletins, not to mention the capture of a serial rapist and murderer. Worldwide, we have the conflict in Libya and the ongoing troubles of the tsunami-struck Japan dominating the headlines.

Swing back to Britain again, and we are also being bombarded with something else. There is drama, hype, people wondering how their last weekend in April is going to go, joy over an extra bank holiday weekend... the papers are filled with pictures and bold headlines, each one trying to out-do everyone else in their quest to inform the general public about The Event Of The Year.

Yup, Britain is about to enter the month of The Royal Wedding. HRH Prince William is weeks away from marrying his long term girlfriend, Kate Middleton. 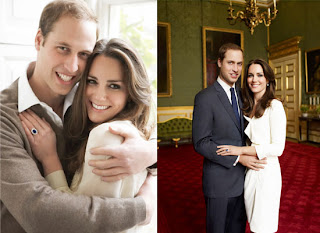 Oh lordy, I really don't mean to offend anyone, but who cares? I mean, seriously? I've got nothing against young Will - he seems like a good bloke who is rather refreshingly down to earth for a member of the royal family. And as for Ms Middleton, she seems a nice girl. The prolific amount of pictures of them together seem to portray a young couple who share genuine affection. No, I definitely don't have a problem with them, just the whole Hoo Ha that surrounds them.

The thing is, I'm not really a fan of the royal family. I don't actively dislike them or anything, I just don't really see the appeal. A hundred years ago I would probably have been a huge 'fan', but in this era, I think the appeal of having a royal family has worn off. There are just too many celebrities out there who live the high life, and it was the privileges of the royal families of years gone by that made them so different to the common people, and thus made them so fascinating.

The hype for this particular royal wedding is huge. We don't get many high profile royal weddings - the younger Windsors seem to have an aversion to them (not without foundation when you look at their parents' marital history) - and this one is definitely 'worthy' of attention as Wills is second in line to the throne. But the last two weddings of upper-end royalty (Princes Andrew and Edward) didn't have the same media coverage as young William. I don't think anyone who was alive for Prince Charles and Lady Diana's 1981 nuptials could ever experience the same level of hype, but I do believe that William, being the elder son of that union, may yet come close to outshining his mother's 'fairytale' wedding. We have tea towels and mugs, commemorative sticker albums... and no doubt there will be several ten-page souvenir pull-outs from all of the daily papers when the big day arrives. Public houses are to be given a one-day only relaxation of the licensing hours, just so that people can raise a few more glasses to our future King and Queen.

People want something to feel positive about, I guess. As much as I understand the reason for the hype, I just don't get it. They are people, the same as you and me, regardless of whether their blood is red or 'blue', and regardless of their family circumstances. Will and Kate seem like a nice couple, and I wish them joy and a very long and happy marriage. But I would wish the very same thing to any couple that are about to tie the knot.

Needless to say, you won't be seeing any Will and Kate tea towels or mugs in my kitchen...

Pictures 'borrowed' from this web page, I certainly claim no ownership of them. :)
Posted by Amber T. Smith at 12:00 PM

Hm... My invitation seems to have gotten lost in the mail. I assumed it had to do with me jumping continents all the time, but now that I'm back in Europe, I'm puzzled it hasn't arrived. Did you get yours?

Seriously, though, I hear ya. Why care. I'll probably watch a little to see all the gorgeous gowns (Kate's included, I'm sure), but in reality - it is of little consequence in a world where Libya and Japan and whatnot is there to remind us all is not cake and flowers. I think you're right, though - people care because this is happy news, not Libya or Japan. In a way, I understand them.

Invitations? You mean those expensive-looking, gilt-edged & embossed fancy card things? Nope, mine appears to still be traveling via Royal Mail (thus is almost certainly going to get lost, or atrrive a week too late at the very least).

And yeah, I'll watch snippets too. Won't be able to escape them, really... *snort*

I remember being a little girl and watching the Charles/Diana wedding on TV (at the crack of dawn, I think.) I'll probably pass on this one. Probably. Well, I dunno...there IS something oddly fascinating about it all.

I'm not a royalist and don't pay much attention to the British nor other European royals. But I wish the young couple good luck, and hope they don't get everything screwed up by public scandals and paparazzi pictures >:)

Elizabeth - I was a few days shy of five years old when Charles and Di married, and what I remember most is the huge street party we had. All I remember of the actual wedding was the HUGE dress that Lady Di wore, and that everyone was going on about how she messed up Charles's names in her vows...*snort*

CAH - Yup, I'm with you on everything you say. The perils of being in the public eye, eh?

I love fairy tale weddings. This promises to be one of them. The bride and groom are so handsome together.

I'm with you. My girlfriends want us to get up early on the day and watch but nah. I'm done with that. I don't even know this kid! I'm done with the money being spent on it too. Seems fairly outrageous considering the slime and muck of the dark ages that is upon us. so...at least the Queen suffered a bit. I do like her but not BECAUSE she is the queen but because when she looks in a veteran's eyes after a long, long day (especially for someone in her eighties) she appears to really care that they worked for her dad. yep. I do like that.

Well, as someone who thinks history is totally awesome... and yet can't trace her own family tree back past the 20th century... the idea of knowing who vast numbers of your forebears actually were? Rather appealing. That's why I like the royal thing - a sense of tradition and history.

With that having been said, erm, yeah, media coverage is out of control. I remember watching the 1981 wedding as a toddler... which really all kinds of terrifies me. :-P

Michael - Fairytale weddings are nice, no question. It's not so much the wedding itself I object to though, just the big fracas that surrounds it.

Jan - I like the Queen as well. She's been embarrassed so many times by her family, yet she's always dignified. And I think she deals quite well with the public too, considering her generation and the in-built stuffiness that comes with being royal.

Leanne - The tradition stuff is cool, I agree. I actually find the whole history of British monarchs fascinating, but I just don't think they are as neccessary (for want of a better word) today.

And yeah, the fact that THAT wedding was 30 years ago, and I remember it well, REALLY scares me. *shudder*