The End of the World

Tsunami in Japan. Revolution in Libya. Girls stoned to death in Bangladesh. Kids abused in shelter homes in India.
Cobra escaped from a New York zoo. Leopard trapped in a Mumbai drain.

You would think people could have their pick of news. But the one thing that has taken over every living, breathing moment of over a billion people for almost a week is none of those. It is something that transcends all of that. It is something that features Gods and devils. It is the End of the World. It is WAR!

Yesterday, India took on traditional rivals Pakistan in a game of cricket. Get that? A. Game. Of. Cricket. Yes, just a game. A game which is played in barely 25 countries across the world. A game!!!! Sure, both India and Pakistan were "on a roll". Sure only one team could have made it to the Finals and have a crack at lifting the World Cup. Sure, it is the last chance for India's finest cricketer to lift the Cup. Sure, sure, sure. But....It. Is. Just. A. Game.

Offices were declaring a holiday, people were planning to wear Blue to support the team, people were going wild with facebook status updates.

But when I mentioned on my status message "Much that it may surprise you to hear it, the world is not coming to an end tomorrow!!!", people still did not get it. I wonder which part of the message was ambiguous, but I had at leat two people call me up and ask me if I was trying to reassure myself that the result of the game did not matter because I was scared that India would lose.

Surprisingly, or not so surprisingly, I had only one person back me up (and if you are reading this, you know exactly who you are)!. Everyone else chose to belive that the World was Indeed coming to an End, either way.

Like one otherwise sensible person commented, "how can u guys be so placid. This is not cricket. Cricket is when india plays with anybody else. With Pak...it is a war!!"

Get real, guys. Cricket is a game. Just. A. Game. It is not War. Cannot be War. Should not be War.

It had to happen sooner or later. In fact, knowing me and my big mouth and even bigger opinions, I am surprised it did not happen earlier, much earlier. I freaked! On Facebook! On my own wall on Facebook.

This is not War. War is when you are fighting for your Values, for your Freedom, for your Land, for Riches. War is a high stakes game, where people get hurt. War is the catalyst that forces negotiations to happen. Cricket. Is. Just. A. Game.

But more than that, do the people who speak of War even realize that by bickering with Pakistan, India is pulling herself to Pakistan's level. Pakistan is still an underdeveloped Third World Country. India is spoken as one of the Political and Economic Success Stories. War with China, I can start to condone, but a war with Pakistan? Disregarding the military might of the two countries, if India takes on Pakistan, I would call it "bullying", not "War". 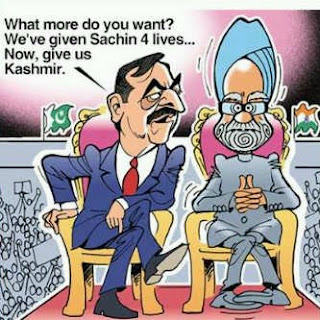 Anyway, India won the match (even though I am not the only one who thinks it was fixed). The World did not come to an End. The Finals against Sri Lanka will be anti-climatic. I refuse to be sucked into the Mass Delusion. Cricket is just a game, and I would rather be out running some miles, or kicking a few balls than watching a bunch of overpaid models strut about a cricket green.

Or maybe I will do something that provided me unlimited amusement during THE WAR- follow the game, not on TV or live streaming, but through Facebook Status updates. The real winners were not the Men in Blue, the real winners were the mobile service providers- they must have done more business in one evening than they did in the rest of the month put together.

And who knows, maybe the World will come to an End if India loses the next match?

And since this song refuses to refuses to go away, I am inflicting it on all of you.

I like this song...though I have a friend who's a songsmith and he wrote a song with this as the first line "If you can't live without me, how come you aren't dead yet!" ha ha.
I'm with you - sport heads elude me although I've given birth to two of them. I'm so glad my sweet patootie has the same interest as I do in sports. none.
Jan Morrison

Hahaha...Nuts... Somehow the partition not just partitioned a nation, it created a partition in sports as well. I remember when I was in Cal in 1986-1990 - on one of the years then, there was a similar situation. India England, Pakistan Australia. When India lost to England, there was deathly silence among the boys in the colony. I could sense that the regret was not that India lost, but what if Pakistan wins! When Pakistan also lost (maybe they needed India to win to get the adrenalin up?), there was such celebration!

You probably don't remember, but I wrote a fan fiction once that included India being the only country that cared about cricket... teehee--I know it isn't true... and I do get that there is a long history of conflict with Pakistan, so there was the potential for little brother to show up big brother... but I am completely with you that these people who see sports as representative of something greater are starkers...

So just out of curiosity, I decided to mention the match to my mild-mannered, sports-indifferent Indian-born coworker this morning. Sure enough, "We WON! It's like war with Pakistan, but we WON!"

Whoa. Totally believe you now. One of these days, I swear I'll even figure out the rules to cricket (I think I've got LBW down now ;-) ).

Please don't shoot me but I've never watched a game of cricket. But, if India feels for cricket what the Mexicans feel for fotbol, then it may be the end of the world!