Lessons from the Millennium Trilogy

Fifteen months back, I read the first book of Stieg Larsson's Millennium Trilogy. I do not like reading books that have too many violent scenes, and I definitely do not like dysfunctional characters like Lisbeth Salander, but "The Girl with the Dragon Tattoo" gripped me from the first chapter, and I did not put it down till it was done. Though I bought the second book within a week of finishing the first, I deliberately held off reading it for nearly six months - if Stieg Larsson's written only three books, I reasoned to myself, I might as well spread out reading them so I get to enjoy them for a longer period of time.

"The Girl who Played with Fire" didn't disappoint. I had read Pippi Longstocking in the intervening months, and knowing that Lisbeth character was the author's version of what Pippi may have grown up to become made me treat her more kindly than I may otherwise have done. I cheered with Lisbeth when she extracted her revenge on the system that had tried to exterminate her, and when I finally put down the book, I knew I would definitely be reading the third book in the series.
For one reason or the other, I never got down to doing so for nearly a year. I always knew that the book was there on my list of books to read, but there was nothing calling out to me to read it. Then one day last week my son asked me what kind of bird a 'hornet' was - he had seen someone reading the book, and presumed that since the hornet had a nest that could be kicked, it had to be a bird. That did it. I ordered the book the same day (at a 75% discount - don't ask me how), and started reading it the moment it was delivered.

The book didn't seem anywhere as engaging as the other two had been. For the first 100 pages, I assumed that it was because I had read the prequel so long ago, that I did not really remember most of the backstories. But I plodded on, knowing that it would all come back eventually. Then a new character appeared - an older man who merited a very long paragraph of tedious description even before his name was mentioned. He was not anybody special. At least not in the Lisbeth Salandar category of special. Why then did the author think I particularly wanted to know about his blond hair, or the fact that at his age he thought a second glass of whiskey in the day did not really matter as much as it would have earlier?
The irritants started manifesting themselves. Sure we know that Mikael Blomkvist is partial to Apple products, but does he have to be using his i-something every time he appears? If Larsson had to go into excruciating detail while describing the attire of all the female characters, why did he leave out the shoes and the bags?
The book was just under-edited.

When I read the first two books, I had been a lifelong reader, and I related to the engaging characters and the well-plotted storyline. But in the intervening months, I have become a more critical reader. Seeing the effort that people put into their books, I have become far more demanding of what I consider excellence. I have learnt what to look for when critiquing a book. And I have become less forgiving of excess words hanging around in a published manuscript.
Whether or not it would help me when I finally get down to writing I do not know, but it is nice to see the evolution of my editing skills.

And here's a cool poster, which says it all about something else- 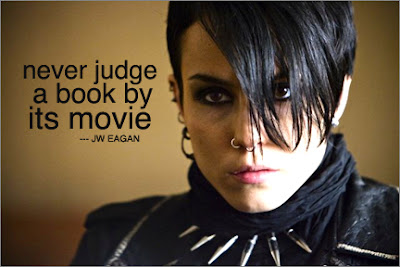 I've only read the first two, but I essentially agree. They're good, but I'm just not sure they're as amazing as the hype wanted them to be. I especially thought the first one took too ling to get going.

And I didn't care for the boob job either. I mean come on.

The actress in the Swedish films is freaking awesome though.

I wonder how much different they would have been had the author been alive during the editing process. I think it's not uncommon for posthumously-published stuff to have less cut out of it (or even have stuff ADDED instead), since the creator isn't around to venture his or her opinion (goes for music too, look at the Bartok viola concerto, for example). I still had a great time with the trilogy though - Lisbeth's just cool. :-)

I haven't read these, but hubs has. And now that you like them, I'm having second thoughts about my avoidance... I mean T.H. and JRM liking them is one thing...

but this is an interesting post. And of course, since he died, I guess it was impossible to address these problems, yes? :o) <3

Just started reading the first one... Not all can sustain interesting plots for three books I suppose.

I agree with Leanne and Hart. I have only read the first two and found them to be under-edited but interesting all the same. I could see Lisbeth being one of my students with emotional disturbances.

However, some of the content I found to be too fantastical; such as Lisbeth's super uncanny ability to escape every single encounter with death, Blomkist's sexual appeal and so many other qualities of various characters.

I plan to read the last of the trilogy but not until this summer when I can really enjoy it.