I spent a considerable part of last Saturday organizing the “Documents” folder on my hard drive. It was a tedious task. I’ve spent the last few years being insanely computerized, in everything from school to work to personal life – and as a consequence I have produced an impressive amount of documents. I may not be the most organized of people as it is, but what has made my documents particularly unorganized the last few years is the fact that I’ve changed laptops –twice – and I currently have two at the same time. I also have an external hard drive, and none of them match completely. Some of the documents are duplicates, some are partially synchronized backups, some are completely different.
I can’t do anything about the other computer or the external hard drive as they currently live on a different continent than me. But I could help the one on the laptop I have available, and thus I set out to fix things (partly as a way of procrastinating against actually writing anything…).
Anyway, since I am so proud of my new, tidy folder, I thought I’d take you for a tour. After all, since I do spend so much time in front of a computer, my files and folders probably answer the ever-humbling task of answering to “Who Am I?”-Friday better than I could… (Though to be honest, it would probably be more representative if we took a look at the other laptop. Well, that’s not really an option, so there.)
First, let me show you just how pretty and neat it looks: 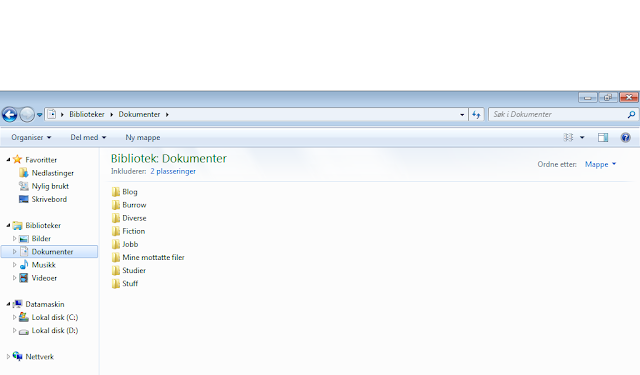 It used to be a mess, with some files inside folders, some not, most sporting titles I didn’t know what meant. Now, it’s all organized and neat! (Though I now notice that I seem to be extremely language confused, switching like crazy between Norwegian and English in my folder titles…)
Let’s jump to the folder entitled “Blog”. 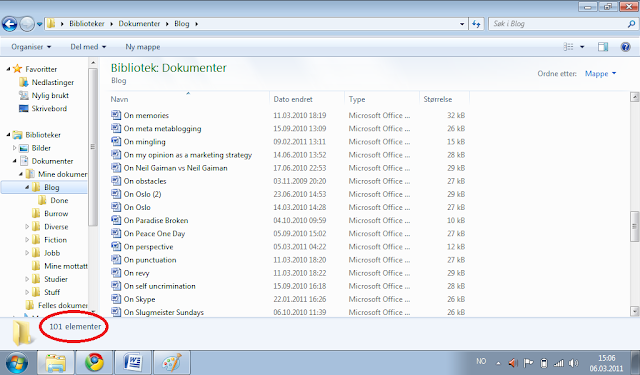 I find it interesting that it says I’ve got 101 elements there. Both because I notice that I’m only partly done organizing this particular folder since many of the posts there obviously should be in the “done” folder, but also because I think that 101 is a pretty large number. You see, I have written a lot more blog posts than what I’ve saved in this folder. I have a “blog” folder on my other laptop as well, and unlike almost every other folder on these computers, the blog ones don’t have much overlap. In addition, I know that many of my blog posts have been written directly into Blogger, without use of Word. Thus, 101 seems like something of an achievement, actually.
Now, let’s look into the folder “Fiction”. This is the scary one. 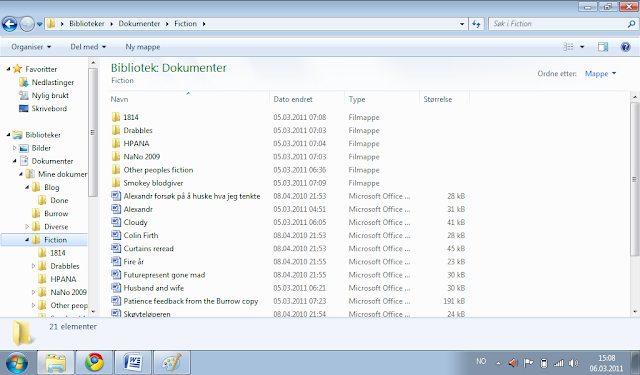 Fiction only has 21 individual documents, but those are all (with the exception of two) also individual ideas. As in stories I haven’t written. What is scary about this isn’t just the fact that my imagination is sometimes a little intimidating (even for me), but the fact that I haven’t written them. The folders at the top have more than one document in them. With the exception of “HPANA”, “Drabbles” and “Other people…” they are projects that I have put a considerable amount of thought, research and energy into. And yet they just. Sit. There. Untouched. Before my “spring cleaning” this week, I think it had been several months since I had looked into either of those folders. Yikes… I need to get writing again!
(And don’t ask me about the working title “Smokey blodgiver [blood donor]”. It’s just.. Don’t..)
Moving on… The last folder I will give you a peek into is the one entitled “Diverse”, or in English, “Various”. 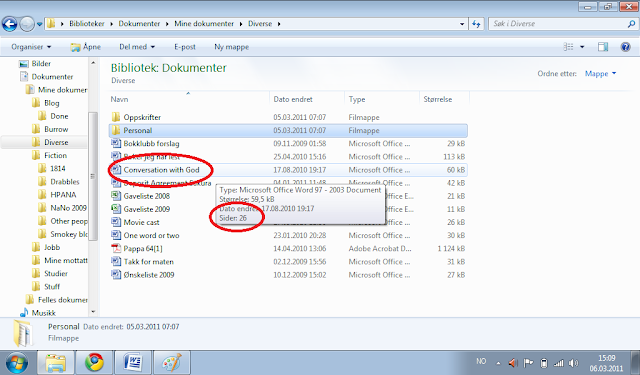 Everyone has a “various” drawer, right? This is mine. It’s where I stack all sorts of stuff I don’t know where to put elsewhere (not at all to be confused with the folder “Stuff” which isn’t as random as it seems…). Basically, it contains recipes (“Oppskrifter”), a list of gifts I’ve given different people for Christmas and birthdays (yes, I’m a dork…), a speech I once gave, and so on. The document entitled “Movie cast” isn’t at all as interesting as it looks – in fact it only contains the names of certain actors I like, actors I guess I would like to have in a movie should I ever get to cast one (you never know, right?), and frankly I have no idea why this document didn’t get deleted in the cleanup process… The folder named “Personal” will have to stay that way…
The document I encircled, however, is a funny one. It’s not as deep as it sounds. I briefly toyed around with the application called iGod last fall (you know, when I was supposed to be writing my thesis…). It’s an artificial intelligence application, where you ask questions and it will answer based on your questions and its gathered knowledge base. Or something.
Anyway, it was pretty entertaining (if a little sacrilegious). “God” was a fascinating conversation partner, if mostly for the fact that it doesn’t take long to outsmart artificial intelligence (fortunately). The fact that I copied off text worth 26 pages (!) says something, though, whether it is of the level of entertainment “God” provided, the level of procrastination I engaged in, or both…
So there you have it. You have seen my hard drive. Now show me yours. ;)
Posted by Cruella Collett at 12:00 PM

Email ThisBlogThis!Share to TwitterShare to FacebookShare to Pinterest
Labels: Cruella Collett, organizing, Rituals, time management, Who am I? Friday, Writing

Oh, see, this just makes me feel wretched. My files are all hanging out individually all over the computer, some things are stashed on thumb drives, my external hard drive quit on me twice and hasn't worked for two months, I don't back anything up on paper...

All I can say in my favor is I'm writing a LOT. I hope I can find it all when I need it.

Okay, I really need to do this. Erm, after I finish my taxes. As a thoroughly off-topic but heartfelt aside, I'm so glad you're okay!!!!! Those pictures are terrifying...

I had everything really neatly organized on my flash drive but guess what? Some butthead at work deleted my flash drive when I left it in the USB port of the computer overnight.

*smacks whoever did it*

Love your organization though. It has inspired me to "Spring clean" my home computer.