I'm not going to claim to be in the league of Paula Nancy Millstone Jennings. Or even Vogons. Definitely not Vogons. Or that McGonagall chap (no, not Professor McGonagall {who is female in any case}). But I am rubbish at poetry and I'm going to prove it!

Every once in a while, I get some weird idea that just insists on being turned into a poem. You might even call it a wild hair...

Ballad of the Stubborn Armpit Hair

It was very early
On a chilly winter morn,
When I decided to myself
That I would not be shorn.

Outside was rather cold
Thus tank tops would not be worn.
And so I figured I was safe
Her body to adorn.

I miscalculated badly
For a party was that night.
But I resolved not to go down
Without a worthy fight.

She razored to the left
And then tried it on the right.
Still I remained standing
Her efforts for to spite.

She stepped out of the shower
And reached for something new.
A pair of tweezers came in sight -
She said: "These ought to do."

One way she tried, and then
She sighed; she could not get the angle.
For oh! the dread indignity
If from them I should dangle.

Oh woe! Alas! She took a grasp
And plucked me from her skin.
And so, at last, it came to pass -
She chucked me in the bin.

Sometimes, it's my friends who inspire bursts of rhyming madness. The following bit of doggerel is composed of things I found on my Facebook newsfeed one particularly odd week.


Bunnies in the backyard
A seagull in the tub 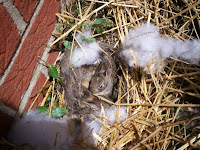 And Satan’s Spawn
Faceplanted on
The bed.

Pushups at a funeral
Falling up the stairs
And swallows aim
To wound or maim
Your head. 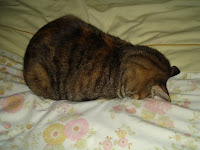 Out of work
The kid’s a jerk
Exams taken
Stirred, not shaken

Everything I’ve listed here
Was posted recently
So it portends
That all my friends
Are nuts!

Yes, I'm sure all our regular readers will know exactly who was not wearing pants...

Which actually sounds like a really good idea right now, come to think of it. I mean, my cats don't wear pants, and they seem much happier and less stressed out than I am. Yeah. It's clearly the pants.
Posted by ViolaNut at 12:00 PM

*giggles* Yeah... I remember that poem in which I recognize myself at least twice... Stubborn Armpit Hair.... NICE!

Tami - erm, yeah, you're there all right... I actually had no trouble remembering where any of it came from, despite it being about 2 years ago. Scary.

I remember both the poems - read the first at Cafe Steinbeck, I think.

And the second one I remember vividly - Tara was the one with the bird in the bathtub, and I think it was Mari who fell up the stairs. My kids haven't changed and neither has Tami's pantlessness.

Natasha - right on ALL counts! Impressive. :-)