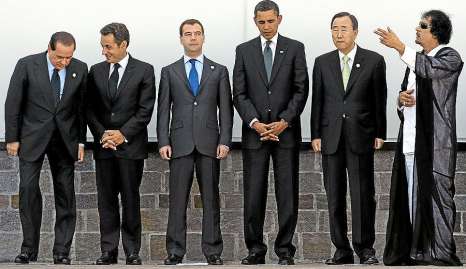 You are probably thinking that I am very predictable.

It is my turn (again) to tackle Topical Tuesday, and what can you expect. Historian, political scientist, with the Middle East as my specialty. There are revolutions going on in Northern Africa, and I eventually had to touch upon it.

I actually had to google Libya today to make sure it was in Northern Africa.

So no, I won't be giving any lessons on Libyan (Libish?) domestic politics anytime soon.

I did think I might talk a bit about the above picture, though.

It cracks me up.

It was taken at a ceremony honouring the victims of the earthquake in Italy in 2009. Now, don't get me wrong - I don't think the earthquake is funny, and neither is the fact that while Gaddafi might look like a lunatic, he is also a brutal dictator who recently (or not so recently? Again, my Libya-knowledge is fairly limited) has taken to slaughtering his own population.

But set the seriousness aside for a while. Look at the photo and tell me that the picture - separated from earthquakes and Libya and whatnot - the picture is funny.

This is how I envision the situation:

GADDAFI: I am the Saviour. Or the weather girl. Or the missing love child of Stevie Wonder and Carlos Santana. Either way, I am here. I'm sure you're all terribly impressed that you're in the company of the greatness that is Me, and I accept your adoration even if you only are leaders of the UN, US, Russia, and that country that makes French Toast. Silvio was wise to invite you to worship me.

BAN KI-MOON: I can't believe I let them talk me into this. Kofi would never have been forced to stand next to this clown. Oh, my god. Is he going to touch me?! Maybe I can move a little closer to Barack and hope they cut Gaddafi out of the picture?

OBAMA: Look serious now. Or sad. Think of the economy - that should do the trick. Do I look more serious and sad with my hands folded? Hm... Maybe if I look shut my eyes no one will remember that I ever appeared in a picture with these people?

MEDVEDEV: He is so TALL! Will I look taller if I stand on my toes?

SARKOZY: *snicker* Hey, Silvio, have you seen that Gaddafi is wearing a dress? It's so funny I almost wet my pants a little. *giggles*

BERLUSCONI: Yes, yes. It is all part of my plan. Gaddafi is so crazy I will look like a serious politician in comparison. I'm sure my friendship with him will never backfire!


There you have it. A blog post.
Posted by Cruella Collett at 11:00 AM

we are living in interesting times. And you're right. That picture is freakin hilarious! :D It looks like Gaddafi is trying to get them all to sing or something. Obama = get me outta here... :D

Medvedev may in actuality have a stick inserted up his... erm... I'm going to stop right now before any more international incidents are created. ;-)

Thank you ladies, I'm glad I could spread a little joy on a Tuesday morning/afternoon/evening/whatevertimezoneandwheneveryoureadit.

And I agree - it does look like Gaddafi is trying to lead a choir. "Come on now, everybody, let's sing 'Libyan Vida Loca'!"