My favourite (and not so favourite) Indian books

I am not sure if as many people have growing up reading Enid Blyton in her native England, as they have in India. Ask anyone of my age and background to name the first book they remember reading, and I am willing to bet my dog-eared copy of 'Five go off in a Caravan' that it will be an Enid Blyton book they mention. None of us had ever had bacon and eggs for breakfast and scones for tea, but all of us knew that scones were not scones unless they came with lashings of butter.
With Julian, Dick, George and Ann, and Timmy the dog as childhood companions, and Nancy Drew and Sherlock Holmes forming the logical progression, it is no wonder that I was well into my late teens when I first started reading Indian authors. 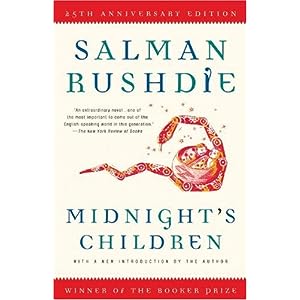 The first "Indian" author I remember reading was Salman Rushdie. Everyone, and their second cousin by marraige twice removed, had told me that 'Midnight's Children' was a MASTERPIECE, and curiosity finally got the better of me, and I checked the book out of the library. I expected brilliance, and did not get it. I lowered my expectaions, but the book still did not engage. And I finally ended up finishing the book only because I had yet to realise that my time was too precious to waste on misgotten ideals like 'you started a book, you got to finish it'.

The second "Indian" author I read was Arundhati Roy. I had fallen in love with her as the protagonist of an English language, quirky, campus movie that enjoyed unparalled success within a very select audience, and I wanted to read the book that had got the unparalled advance that it had got. 'God of Small Things, was another of those books that I finished only because I did not like not finishing books. Elegant prose if you pick a page at random and read only one page. But unbelievable characters, and a plot that I thought was non-existent. Maybe I am doing the book an injustice, but not even one scene stands out, which leads me to believe the book was entirely forgettable.

I took a decision NEVER to read any more books by Indian authors, but since I had already purchased Shashi Tharoor's 'The Great Indian Novel", I decided to make that the last book I ever read. I am glad I did. Tharoor took India's greatest mythological story and adapted it to the current political scenario. It was not the most imaginative of plots (I can think of at least two Bollywood potboilers which are based on a re-telling of the Mahabharata), and at the time when I read it, the book was at least two decades outdated. But it was Brilliant. Some references were obvious, and others were too smart for me, but there were enough obscure references which you felt good when you managed to crack. A familiarity with the original story, and a knowledge of the history of the first three decades of Indian independence is needed to make sense of the book, but it is a book I would recommend unhesitantly to anyone who knows a bit about India.

By now, I could see the pattern emerging. For a book written by an Indian in English to be popular, it seemed necessary to have a very strong mystical, exotic and/ or poverty striken angle to it. But was that really India? Wasn't India a lot more complex than just that? Shouldn't books written by Indians and set in India deal with issues that occupied mind-space in India?

Shashi Tharoor gave me that book. 'Riot' is the story of a small Indian town torn by religious violence told from multiple perspectives. In hindsight, the protagonists were almost predictable- the do-gooder American wanting to discover India, and doing so insite the pants of a seemingly upright civil servant. The Hindu and the Muslim. The fundamentalist, and the seculars. The perpecturators and the victims. But what I loved about the book was the way the author portrayed 'reality' from each of their perspectives. It was a book that I ended up recommending to many people, less for the literary merits of the book and more for the balanced picture it painted of the country.

After Riot, I decided to read "Indian" authors without thinking of them as "Indian" authors. I expected nothing more or less than a decent story, well written from them. If the characters and situations seemed familiar, I would be happy. If they did not sound familiar, I would just pretend they belonged to a foreign setting. The book I read immediately after taking that decision was the book which I still consider one of the best books I have ever read. 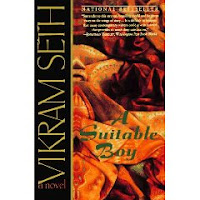 Vikram Seth hit the headlines when I was a teenager because of "The Golden Gate", the novel written entirely in sonnets. Much as I was captivated by the novelty, I knew better than to attempt reading the book. Instead, I waited for 'A Suitable Boy' to lose my Seth virginity to. And a better book I could not have chosen. Characters I could relate to, circumstances that sounded so familiar I could have lived them myself, believable story line, great storytelling. What's not to adore? And the best part of 'A Suitable Boy' was the fact that in an absolutely non-pedagogical manner, the author was giving me nuggets about my country that I had not even suspected existed. Most people comment on the length of the book - not me. I would not want a single paragraph from that book deleted. 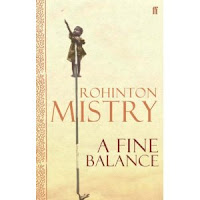 Rohinton Mistry's "A Fine Balance", was a book I picked up, strangely, because Cruella asked me if I had read it, and what I thought of it if I had read it. It had been a book I had been intending to read for a very long time, but which needed a catalyst to actually get me reading. And I am glad I did. Set in a particularly unsavourable period of recent Indian history, it is the story of four characters I have never met, and would never meet. The book got me thinking like few works of fiction have- it tied together all those assorted conversations which I had with various people, and from which I missed the core point. It made me start reflecting on the real cause of India's ills, and led me, many months and many conversations later, to hone in on what I now believe is the thing we most need to change in our society.  I am not sure if everyone who reads the book will take-away what I did from it, but even otherwise, it is a book worth reading, if only for a story well told.

I could perhaps go on much longer with my opinions on "Indian" books, but that can be kept for Part 2.
Posted by Natasha at 12:00 PM

Great post! It's so interesting to see your evolution with these authors!

I had no idea I triggered your reading "A Fine Balance"! I'm glad I did - I too really like it, even if I agree with you that the outcome of reading it was different for me than it was for you (I don't know enough about India to reach your conclusions). But I very much liked it, and I'm intrigued that you did too :)

As for the rest - I haven't read all of them, but the fact that I have read quite a lot of them probably speaks well for one thing you neglected to mention in your post: how incredibly well India is suited for this kind of story-telling. The potential for characters, stories, descriptions, mythical mixed with harsh or hopeful reality - your country is truly one of the most fascinating on the planet, Natasha!

@ Lydia - I guess I too have evolved as a person during the course of reading all those books, and that reflects in my reading.

@ Mari - India is a fantastic country for telling stories, and for precisely the reasons that you mention. The only problem is that India is also so complex, if you start trying to describe it, you end up sounding pedantic, and if you merely indicate, the reader may not get as much as you intend her to.
But, A Fine Balance was a fantastic book- wonder why I had not read it till you asked me about it.

God of Small Things is the only one of these I've read all through, and I happen to think it is not only beautiful prose but perhaps the MOST beautiful prose I've seen. I know you have issues with the book--we've discussed it... the plot is simple, and I think you are entitled to take issue with the characters, as you are in a better position to judge what is realistic, but I loved it.

A Suitable Boy I read about half of and really enjoyed it, but when life is so busy, I felt guilty continuing to renew it from my library (in fact I think I couldn't because they only have one copy and there is a waiting list)--I need to slate it for a time that I just have reading time. I loved what I read, but it is long and meandering (which I love, but it's not a fast read). I should look for a couple more of these.

It's embarrassing to admit, but the closest I've been to Indian literature is Rudyard Kipling. But he was part of the British imperialism, so it doesn't count, does it?

I am ashamed to admit that I have never read a book by an Indian author. I am really interested in the last book you mentioned, A Fine Balance. It sounds as though I will get a great "thinking" book and an interesting perspective on Indian culture/ background.

Your culture is not one I am familiar with although I have a few students of Indian descent.

The Indian writers I've read all have a very quiet voice--like Jhumpa Lahiri. I probably have a stereotype in my head, but I like it. It's a rational, intelligent voice. Although I've never read Salman Rushdie. Richard has, and I don't think he cared for him... :D <3

I share your sentiments about the God of Small Things. Fine turns of phrase but overall not my cup of tea. I haven’t read a few of the others you mention, especially the ones by Tharoor and Rohinton Mistry. But I did love A Suitable Boy, and actually am proud to say I finished all 1500 pages of it during my college vacations. A cousin presented me Golden Gate on my birthday, and I liked reading it but I don’t really have a flair for poetry.

Phew! I thought I was the only duh one not to like Midnight's Children and be wary of Rushdie!

I did enjoy The Great Indian Novel, God of Small Things and Riot. Suitable Boy - absolutely with you. I fell in love with Seth for the way he brings out the very "Indian" without being cliched.

Must read "The Fine Balance" since our taste in reading seems very similar.

I also love Indian writers some of my FAVORITE INDIAN BOOKS are one night @call center, my three mistakes and some other books. Your blog is nice having some great information