Okay, so remember back in early December when I was grumping about how we hadn't had any snow yet? Errrrrm. Yeah. We are now in the too-much-of-a-good-thing category. Holy hexagons, it just DOESN'T STOP. Now, I went to college in Rochester, NY - two degrees' worth, so 6 years. I'm thoroughly familiar with blizzards, lake-effect snow, 8-foot-high snow drifts, and all that fun stuff (not being sarcastic, generally speaking it WAS fun, especially when we sneaked {oh, sorry Tami - snuck} trays out of the dining center and went sledding on them). But the thing is, on the whole, Rochester is far better equipped to deal with massive quantities of the white stuff than good ol' Boston.

Of course, that's part of the problem - OLD Boston. With narrow winding streets and mazes of one-ways, there are roads that the plows just can't fit down, especially when snowbanks from previous storms have narrowed them even further (and there are cars parked on both sides...). Oh, and then there's the fact that we've been getting walloped every 4 or 5 days since the end of December. There's just no place to put the stuff, especially when it doesn't want to melt. Then again, even when it does melt, the grates are iced over...

Speaking of ice, that's been building up in gutters and on roofs, leading to a record number of building collapses and structural failures throughout the region (like this one). As if snow days weren't disruptive enough to schools, how about being closed for days or even weeks because the snow caved in your roof? And there are some sidewalks you do NOT want to walk on, since the possibility of being impaled by a falling icicle is higher than anyone is comfortable with. Check out this set of frozen stalactites, snapped by my roommate as they grew on our house: 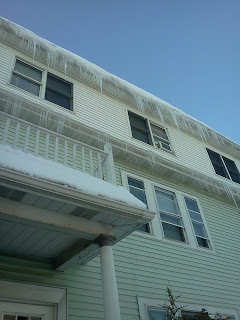 They got even bigger before finally launching groundward in Sunday's thaw - I must admit, it was rather amusing to be awakened by the thunderous crashes of icicles into the yard. Surprisingly loud, divebombing icicles...

I'm tired of digging out parking spaces, too. There's a longstanding tradition in Boston that for 48 hours after the lifting of a snow emergency, the rule is "you shovel it, you own it", and you'll find everything from folding chairs and traffic cones to garden gnomes and piles of buckets sitting in cleared spots. The annoying thing in my neighborhood is that we're one block in from a main road that people need to vacate during a snow emergency... and so they come in and park on my street (which means I usually end up parking two blocks away...) and then they don't bother to shovel out their spots properly afterward, just gun it out of there and leave the slushy icy mess to refreeze, meaning no one else can park there without doing some major icebreaking (or just getting stuck, as the case may be... go on, ask me how I know that...).

Now, lest anyone get the wrong idea - I do still love snow. What I don't love is trying to drive in it alongside idiots who don't know how; having to go to work at a silly retail job in highly dangerous conditions (remind me to tell you about my duct-taped windshield wipers sometime); and how it looks after it's been rained on and plowed up and peed on (lotta dogs 'round here). But as I type this on Monday night, guess what's in the forecast for tomorrow? Only about an inch this time, supposedly - enough to make it pretty again, I hope, without any of the problems we've seen lately. I'll let you know.
Posted by ViolaNut at 12:00 PM

Last night was another inch -- this time the fluffy kind. It pretty much blew away. I don't know where it blew to and I don't care as long as I didn't have to shovel it.
The ice is a different story. It'll take at least a week before it floods everything. O-H-I-O!

Urgh! You guys have really gotten hammered with it this year! We have a good amount (I'd suppose about 15 inches accumulated) and teh roads and sidewalks aren't bad except for the need to cross streets at driveways or climb over mounds to get from street to sidewalk... What I hate is the COLD (dropping to single digits for next 3 days. AGAIN.

Love the 'You shovel it you own it' thing! We don't need that where I live and where I work has too many students for any real courtesy to occur.

Snow is better in the skiing resort than on the road, indeed >:)

Mary - yep, that's about what we got, then it got rained away. So much for at least looking pretty again...

Tami - Most people are pretty good about respecting space savers... at least until that 48 hours is up. After that, it's every car for themselves...