Good question.
As of last Friday night I am an orphan.
I stand with my brother and my sister on the front-line of our family.
My father, my dear father, died on Friday, February 4th, and as I am writing this post early - I am going to Ontario to gather with my family - asking who am I is fundamentally a great question.
There are so many layers to this. As we move through life we take on different roles - we are process not project and that is normal. 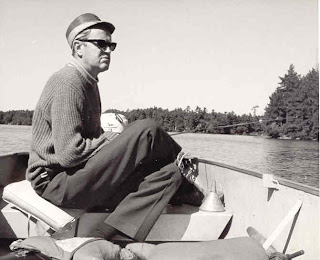 So I'm a third-grade girl with red hair, I'm a skinny teenager who wishes love would jolt her into another life, I'm a pregnant teenager - love having jolted me into another life, I'm a sister,I'm a mother, I'm a step-mother, I'm an aunt, whoosh....I'm a grand-mother.
Or maybe who I am is not my relationships but what I do? I'm a student, a writer, a psychotherapist, a logger, a poet, a clown, a philosopher-gypsy-queen.
But as of last Friday night I am no longer a daughter which is the very FIRST label of who I was that I ever got. ' Born - Janice Anne Morrison, a daughter to Lloyd (Mo) and Beatrice (Bea) Morrison.
First label I suppose after 'oh it's a girl' then quickly or concurrently 'you have a daughter'.
Well, my dears, that is one thing I am no longer.
Perhaps who I am or who am I is not important. Perhaps who I love is the more important question. Now please remember that I am blasted with grief and extreme fatigue so I can't speak riddles as well as on another day. I spent four hours meditating and reading Rumi in the dark centre of the night. Oh right, I'm a Rumi scholar.
And who is my dad? Oh, no. I can't say 'who was my dad'. Not yet. We Buddhists think he is definitely still around for four days following death and usually quite a bit longer. He is in the bardo perhaps. 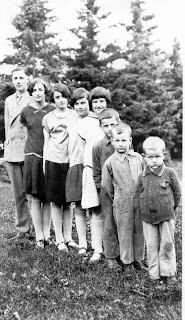 he's the youngest and the last to leave this sweet world...
Or he's walking across a grassy verge to my mother who stands on the other side wearing one of those cotton wrappers of the fifties with her hands on her hips calling out to him, "what took you so long?" He is young and old all at once,  his hair a wild pompadour on his head, his blue eyes seeing clearly - nothing obstructing his vision but her beauty - wearing those neat baggy pants that men wore then and a singlet - he calls out to her in happiness. He's all long legs and casual grace. That's a view of who he is that I can hold.

But wait. He stops for a minute, his heart tugged by something he's forgotten. He turns. There's another group of women and men on the other side of the river. One is a small Scottish woman, his second wife. She's already missing him terribly but glad to see him in his youth. And his daughters lean forward wishing with all their hearts that he might wave goodbye.  His son stands still and thinks of the sweet times they've had. And he sees the others too, his grand-children and his step-children, his nieces and nephews, his comrades and friends. He can't quite see any of them now on the far side, a river fog has come up so he turns back towards mum. Behind her is a bunch of others - his three brothers and four sisters - and they are all laughing and talking at once to see their baby brother at last. His own mum is standing quietly by under a willow - she is hanging clothes, always busy, but she stops to look his way, her hand coming up to shade her eyes. She exhales her relief that all of them are here together. His dad doesn't seem too worried about where his youngest has been - he trusts his brood will check out what he's up to as he pokes about  under this old jalopy.
Now they're all home.

That's where who am I has taken me today.
Posted by Jan Morrison at 12:00 PM

Email ThisBlogThis!Share to TwitterShare to FacebookShare to Pinterest
Labels: Jan Morrison, Who am I? Friday

Beautiful post Jan. And so sorry to hear of your loss.

This was wonderful. A beautifully written, tender post. Life just goes by in a flash doesn't it? Sigh. I know you must miss your dad terribly. Take care of yourself.

Oh, Jan, this was so beautiful. Never mind that I am a sobbing mess at my desk, but I love your way with words and the reunion you see. Though I think once you've earned a role you get to keep it. You are still a daughter.

Jan, I am so sorry for your loss! It is always sad to lose a loved one, no matter how young or old, sick or healthy they are. And despite the fact that you have this beautiful view on his journey forth, and your faith, to help you deal with it, it is still one of those moments in life where nothing will ever be quite the same. I know you have wonderful family and friends to support you - and you have friends here as well - but as you say, losing a parent redefines who we are (even if I agree with Tami - you will always be his daughter).

My heart goes out to you, my friend.