In my native Norway, the only Japanese author most people are likely to know the name of is Haruki Murakami. Then again, Murakami is quite famous. Last summer, the distinguished author visited Norway for five weeks, culminating in a festival in his honour at the “Litteraturhuset” (House of Literature) in Oslo. The festival had a lot of visitors and Murakami was treated as a literary superstar in Norway. His own comment – “This is the coolest summer I have ever had in my life” – indicates that he appreciated the event, though one might speculate whether the wordsmith didn’t also hint at Norway’s climate; rather chilly if you’re used to Tokyo’s suffocating summers.
Since he has made such a name for himself in not only Norway, but throughout the world, it only was appropriate for me – Japan-lover as I’ve become over the years – to read the work of Japan’s most famous contemporary author. I haven’t yet covered everything he’s written (and I’m not sure I ever will – there are certain of his books I prefer over others, and some that don’t seem to fall into my sphere of interest at all) – in fact there is a brand new (though old) book of his at my night stand as we speak (or, as I type…) – I have read the books considered his most significant. Since it is Reading Monday I intend to share my experience of them with you.
Norwegian Wood


This was Murakami’s big break, and for obvious reasons also the book that made Norwegian readers interested. Even though the book has nothing to do with Norway, it flatters a country when it’s mentioned in a popular book title. So much, in fact, that Norway had a considerable effort in the recent promotion of the adapted version. I haven’t yet seen Norwegian Wood the movie, but I’m looking forward to it!
But the book, back to the book. I loved the story, loved the characters, but at one point was so convinced I knew where the story was going that I was disappointed when I was wrong. The danger of being fond of plotting, I guess...
Anyway – aside from the small plot disappointment, I really liked Norwegian Wood. Of the Murakami-books I’ve read, it’s the most “normal” one, in the sense that very few fantastical elements happens (I will get back to this). The story is one of nostalgia, sexual awakening and identity, and it underscores how people’s actions affect close ones, or not-so-close ones. Also, as the main story takes places in Tokyo, it offers an interesting addition to an (at least to me) otherwise chiefly Western rendition of student life in the 1960s.
A small warning, though. You will find the Beatles song stuck in your head, so you might as well just start listen to it right away…


Kafka on the Shore 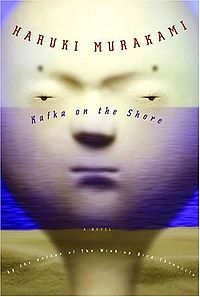 This is probably one of the most complex books I’ve ever read. It’s got two main plots – both of whom are quite challenging to follow. Yet, it can be read as a simple story about searching, for someone or something. The two main characters (Satoru and Kafka – not the author, but named after him) both leave their homes for very different reasons, their stories entwined in several ways, but they don’t actually fuse together. The characters are endearing, confusing, interesting, challenging, but never boring. The descriptions of music, of moods, of the places visited, make you feel that you’re listening, sensing, seeing, in that particular way only Murakami can.


What often throws me off in Murakami’s books is his flirtation with magical realism. It’s something I don’t particularly care for. Often I find myself wondering why he includes this, and I usually end up feeling that there is something written between the lines that I am not capable of grasping. In Kafka on the Shore it is mostly Satoru’s story (visited by such celebrities as Johnny Walker and Colonel Sanders) that made me feel this way, and several times I found myself wishing that I could only read the other half of the book. But then these two stories are part of a larger whole, without which the book would not have been the same. Plus I was deeply fascinated by Satoru’s ability to talk to cats (a reference to The Wind-Up Bird Chronicles, by the way).


In the end, the mysticism is what makes the book, and I found myself trying to make my own explanations to the many enigmas. Definitely a book that makes you think! 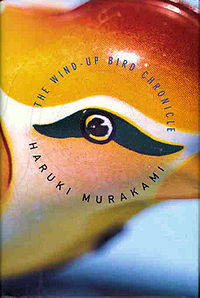 
Of the Murakami-books I’ve read, this is my definite favourite. And yet I can’t actually explain why. I read it four years ago, when I last lived in Japan, and I seem to remember that it was anything but an easy read. I think I spent almost three months reading it (I know, actually, since I had to keep renewing my library loan). I never put it down because it was boring, but it had so many elements to process that it took a while for me to absorb them all. Trying to recall them all for this review I fail – completely – and trying to do a little online research in an attempt to remember the actual plot, I fail again.


So far I probably haven’t convinced you…


What I do remember, is how well crafted this book was. As a writer, I found it truly joyous to read. Each description – even the seemingly boring ones – were beautifully made. I remember most distinctly reading a passage about a woman getting dressed, described in such detail that any other author would have had to cut it from the book because it was completely irrelevant and dull. But not Murakami – not only did it not feel irrelevant (it felt like character description), it also did not feel dull. How he does it I cannot say, but it certainly was beautifully done.


In addition, I remember that the back story – one of the many subplot stories weaved into the main plot, captured me. As a historian I was fascinated with the fact that Murakami dared to address Japan’s controversial history. As a human being I was touched by the relationships described in such tender detail. As a philosopher (if I may…) I was intrigued by the fact that this book made me want to climb down a well and spend some time down there.

Common for all of Murakami’s (fiction) books is that they heavily reference popular culture, they (more or less) include elements of magical realism, and often they are both humoristic and confusing (which isn’t mutually excluding features, I guess…). Since I don’t speak Japanese I have always been forced to read Murakami’s books in translation, but I find that at least the English translation reads surprisingly smoothly  (I’m not as fond of the Norwegian translations, though).


If you’re wondering what book to pick up next, I can definitely recommend a Murakami!
Posted by Cruella Collett at 12:02 PM

I've been coming across Murakami's name more and more frequently...thanks for these reviews. And yes, I had the Beatles song stuck in my head as soon as I read the words "Norwegian Wood!" Thanks for the clip...I think it helped. :)

OH NO, I did not need a song stuck in there too :) Still trying to finish the 2 books I have already started but thanks for the recommendations.

Jules @ Trying To Get Over The Rainbow

Oh how interesting. It sounds like I should read him when I am taking a writing break, as it would require brain power which I don't have much extra of in writing mode, but they all sound intriguing. it sounds to me like it layers MULTIcultural stuff over literary styling, which is complicated in two ways. i love ALSO that both the book and the song Norwegian Wood are overlaps of eastern and western culture, referring to Norway without actually being there... there is an elegance to that. I hear the Beetles India period in the music.

Elizabeth - if you get a chance you should check his books out; they are well worth spending some time on!

Jules - oops, sorry... The funny thing is that I actually didn't get this song stuck in my mind after writing the post, but rather another Beatles song (Across the Universe). No idea why!

Tami - definitely multiculturalism there, though Japanese culture often is just that - they borrow the best of both (or all) worlds. Murakami is the master of this, to me.

I can't believe I missed this. It must have happened when I was away. I'm mad for Murakami and I think I've read most of his books. There are also some great ones on audio books too - I reread or freshly listened to The Wind-up Bird Chronicle lately and also...hmmm...the one with the talking cats -er...
Also I love love love Wild Sheep Chase. God, I love Murakami. I really do.

Jan - I recently bought Wild Sheep Chase (in Japan - weee!), but haven't had a chance to pick it up yet. I might reserve it for a lazy weekend in a park when the weather picks up enough for me to actually enjoy sitting outside...

I've been wanting to check out his non-fiction books too. The one about the earthquake might have to wait till after I go home, though. It's easy to get paranoid about earthquakes here...

(I think the talking cats one is Kafka on the Shore. Though it is a theme in several of his books)