Topical Tuesday- the Curious Case of the Red Rash Epidemic 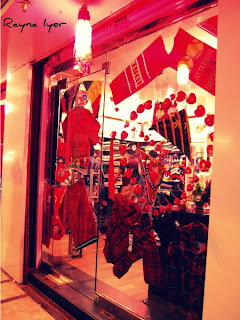 As those of you who have been following this blog know, Tuesday is the day when we blog about something "Topical". And in mid-February, what can be more topical than Valentine's Day? You start seeing the first signs of it towards the end of January, when shops start developing a bright red rash on their windows. It starts out small, but pretty soon assumes epidemic proportions. Till recently stores selling plumbing supplies were immune, but they are also starting to lose their immunity- who are the people who buy tiles with patterns of interlocked hearts for their bathrooms?

But what is Valentine's Day? This is what Wikipedia, my one stop shop for pop-information has to say-


Saint Valentine's Day, commonly shortened to Valentine's Day, is an annual commemoration held on February 14 celebrating love and affection between intimate companions. The day is named after one or more early Christianmartyrs, Saint Valentine, and was established by Pope Gelasius I in 496 AD......It is traditionally a day on which lovers express their love for each other by presenting flowers, offering confectionery, and sending greeting cards (known as "valentines"). 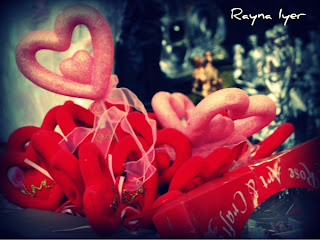 No matter how hard I try, I can't seem to find any well documented, authentic link (except the name) between the early Christian martyrs and "affection between intimate companions". Even though I have a healty imagination, I am just not able to picture one of those early martyrs complete with pained expressions and arrows sticking out their back declaring their eternal love for an "intimate companion" while waiting to be beheaded. Let's just assume the usage of the name, Valentine, is purely coincidential and unintended. Which makes Valentine's Day probably the only truely non-religious, global holiday. 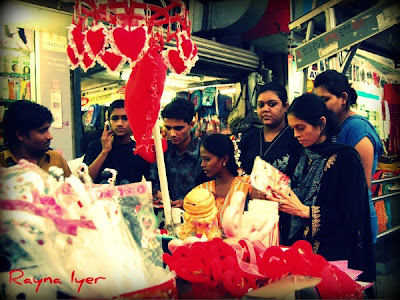 Everybody, that is, who is young, in the grips of nascent love, and dreaming of converting those covert glances into something more. 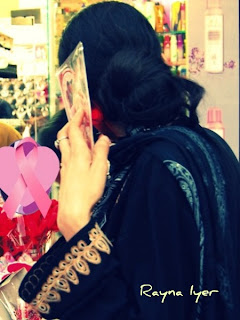 And nowhere is the festival celebrated with greater enthusiasm than in India. A country which is still in the process of emerging from the prudishness imposed on it by the prissy Empress Victoria. A country where even two decades back it was considered almost scandalous for a couple to know each other before marriage. A country where "convincing your parents" that you wanted to marry someone was much tougher than actually finding the person you wanted to marry.

That same India has now embraced Valentine's Day (and Rose Day, and Friendship Day, and A-Dozen-Other-Such Days) and made it it's own.
Valentine's Day is when you send a musical card to that cute guy you have been looking at for nine months, to get him to spend the rest of his life looking at you.
Valentine's Day is when you gift a heart shaped cushion to the girl you have been going out with for two years, before telling her that you would like to take her home to meet "Mother". 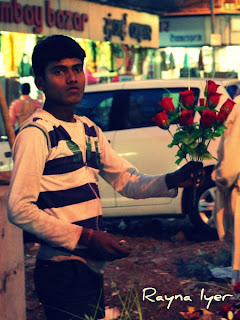 Valentine's Day is when you send red roses to your "intended", so the recipient knows that she/ he is indeed still loved [sometimes I wonder if a guy will even know it if his girlfriend replces the tag and sends the same bunch of flowers back to him- or does that defeat the purpose of romantic love?]

Clearly, all of that is grossly immoral and contrary to the grand modern traditions of Indian prudishness. So instead of digging wells, construting schools and building roads, what do the political parties do? They denounce Valentine's Day as the Secret Weapon that "the West" is using to undermine Indian culture and break the nation apart. Stores are preventing from stocking Valentine cards, florists are forced to down their shutters and couple who dare [gulp] hold hands in public are tarred and stoned.

Serves a dual purpose. The obvious one is that attention is deflected from the fact that real problems are not being solved, to the fact that Indians are daring to express their love in public. But the other objective though less overt is the real one. India has a rich tradition of sensuality (and sexuality). Centruries before the birth of the Watery Tart, ancient Hindu Goddesses had declared war on Clothes. If temple sculptures are to be believed, they wore little more than a flimsy piece of loosely cloth draped around the waist. What they did adorn themselves with, however, was jewellary.

And that's what the Modern Indian Woman is now demanding from her husband. That he gift her Diamonds on Valentine's Day to prove that his love is indeed true. Obviously, the diamond lobby is much stronger than the paper heart one. 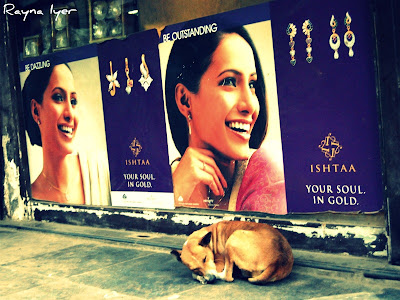 Random aside- why is a so called "heart" shaped the way it is, when a real heart looks nothing like it? And what does the heart have to do with love anyway- isn't it all hormones?

I am not too sure if any of the Burrowers celebrated Valentine's Day (Chary may well be the only exception), but that doesn't mean you would not enjoy the Valentine Feature at the Burrow. A drabble (or more) a day, everyday on the many facets of Love.
Posted by Natasha at 1:13 PM

I always enjoy reading your perspective on things. I've always taken Valentine's Day for granted. It's interesting that India is just now opening up to it and enjoying it with such fervor. I find it sad that a government would try to keep its population from expressing kindness, love and caring. Strange.

I hope your Valentine's Day was a good one!

I hate the holiday, but I love your perspective on it! ;-)

It's pretty crazy in Japan too - crazy enough to last a month since they also do "White Day" - the holiday designed for guys to "repay" the girls who brought them chocolate on Valentine's...

Anyway, I really like your view on it. The red rash. I have a feeling a lot of people experience it like that...

And - I've no idea if these "facts" are facts, since I've mainly gotten them from movies and/or television, but I've heard that
a) the heart shape comes from the shape of a woman's bottom, rather than from the shape of a human heart. So it's sexual, not emotional - ironically.
b) St. Valentine used to wed people in the Christian tradition - so he was a martyr for love (or marriage), so to speak
c) Chocolate consumed on Valentine's Day has no calories.