The many loves of Jupiter

Growing up in India, I was not really exposed to Greek and Roman mythology- when you have two indigenous epics (one of which is the longest epic in the world), and a pantheon of gods and goddesses each of whom seems to have nothing better to do than to get embroiled in stuff that should not really concern them, you do not really need to look further afield for stories of adultery, deceit and valour.

But being the geek that I was, long before I reached my teens, I could recite the names of all the moons of all the planets making up the solar system. I even made up stories about many of them- the lone satellite of Pluto was named after the wife (Carol) and daughter (Sharon) of the person who discovered the satellite - most people I told the story to even believed me, and it took the Hercule Poirot story starring Cerebrus to get me to stop quoting it. The moons of Jupiter were particular favourites- Io, Europa, Ganymede, Callisto, and my own particular favourite, Amalthea. Even the names were sheer music!

And then in the days between middle and high school, I discovered Roman mythology. Suddenly, Jupiter was no longer just the largest planet, he was the temperamental and powerful King of Gods. When he was not reducing things to ashes with one look of his eyes, he was seducing every young and not so young creature around. They didn't even all have to be female. To my bemusement, one of his lovers seemed to be a young lad, Ganymede. And if Jupiter was busy sowing his seeds, his wife was equally busy unleashing vengance on anyone who dared allow her husband to get near them.

But what was most appealing was that I did not have to learn any new names to know these stories. The noblewoman, the priestess, the hunting companion - all of them turned out to be moons of Jupiter. And Amalthea, my own beautiful Amalthea. Why she was the goat who nursed Jupiter when he was abandoned in a cave.

Suddenly, through my obsession with the solar system, the world of Roman mythology opened up in front of me.

Why Jupiter? Why today?

Because Jupiter looks over Thursday. And I do think he would have approved of Delusional Thursdays!

And because of his numerous conquests, he would like the announcement that we are about to make.

The Burrow is proud to present the third version of its Valentine Feature. A drabble (or more) a day, everyday in the month of February, with a special bonus on Valentine Day. All your favourite bloggers (except one- Leanne, where are you in the month of your birth?) are contributing. But what makes this feature specially meaningful for us is that we have contributions from five of our wonderful followers.

We are not telling you who they are - know only there are five of them! 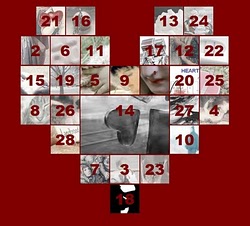 And do not be fooled by the giant heart- there are Burrowers are involved, and the one thing you can expect from them is the unexpected.

What are you waiting for? Rush across to the-burrow.org, and enjoy. And be sure to bookmark the page, because you don't want to be typing out the entire address everyday!

I hate Valentines. :-P More importantly, I'm a disorganized stressball. But you never know, I might cough something up last-minute.

And not to forget, Jupiter, the Bringer of Jollity, from the Planets, a fabulous piece of music by Gustav Holst >:)

Jupiter is in charge of LUCK in the Zodiac... but I HADN'T known he was also in charge of out DAY! YAY for Thursday!

I love your tale of learning about the Roman Gods!