Y'all may have noticed that we Burrowers have an inside track to some of the characters in the Potterverse... well for this Valentine’s Week, for our Delusional Thursday, we asked Rita Skeeter if she might do a little bit of... a gossip column... now some of you might not think much of Rita, but you really are being unfair. She DOES have her fingers on the pulse of what's out there... I'm sure you'll agree. Welcome Rita! 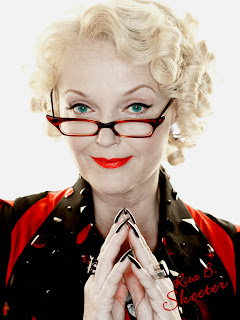 Tis I Rita B Skeeter reporting live from some dark damp place that has affectionately been called home for the past few years. I have been asked to come out of retirement for pure entertainment purposes and a load of galleons.

About a week ago I was having biscuits and tea with a dear friend of mine. The subject of Valentine’s Day approached the table and I tried vehemently to sway the conversation to something more appealing. Like the cockroach that crawled across her china plate. Of course Valentine’s Day is something she looks forward to with her hunky man candy waiting to dote all over her. I quickly informed her that St. Valentine was the Devil and the Day was merely a reminder to single people that they are still single. This is the point in our conversation that she warmed my tea with a sweet lemon liquor. Soon after that we were acting like silly school girls. Although we weren’t really paying attention, a tall drink of water came over to our table to say hello. It was none other than Lucius Malfoy. Of course he was alone, he hasn’t been seen with his wife for years, but rumor has it that he does indeed still have one. We exchanged niceties and he went on about his way. In the moment that his silky hair swung around his shoulder, I could see myself attached to his arm. How different things would be if things were mixed up a bit differently.

(Now just for blathering sake, everyone that we know to be dead is alive and any undead may remain true to character.) Onward!

My matchmaking skills were quickly in high gear, but why stop here in London. There’s that lovely coven of vampires and pack of wolves that live in the States. Those wolves are just chomping at the bit to sink their teeth into those hard steel bodies.

My first mismatch would have to be Hermione Granger and Edward Cullen. She is clearly a know it all, so studying the ways of the undead should be no match for her. She is one muggle born that deserves a blood sucker. Especially one like Edward Cullen, does he even have a backbone? Who lets their significant other snog with a dog and keep her around to tell about it? Not to mention he plans on keeping her forever, yet another undead running amuck. I think Granger and her dirty blood would be just deserts for Mr. Cullen, no matter how sparkly he is when he steps out in the sun.

Bellatrix Lestrange, I just love her hair and her style has left her filthy rich –posthumously of course… So tragic. Bellatrix should no doubt be with that pesky wolf Jacob Black. Dare I say I would pay good money to watch a trisk in that den. I’m not sure who would be the giver of rabies but rest assured it would happen. Look on the brighter side with that hair and his eyes; they would have a cute poodle mix for offspring.

As for our boy wonder, Harry Potter, his best match would be Alice Cullen. Certified nutter she would be perfect for him. Her visions of the future could have set the pace and direction of things to come much differently. Therefore leaving me with more interesting things to write about, near death encounters and betrayal are much more my cup of tea. (With that warm liquor please)

Last but not least, I would pair Ron Weasley up with Bella Swan. Now there’s a pair I could sink my teeth into. Miss Swan for being a complete idiot, one for begging to die, or two, treating her invitation to death like pond scum. Take your pick. Weasley is so clueless about everything he will barely notice when she starts to snog his brothers while hunting garden gnomes.

I do hope you have enjoyed this short take on relationships. Obviously I’m not one to take after, but make no mistake, St. Valentine or not, I will be with someone on that special day, party willing or not.

Stay tuned for next time when we introduce Mr. Darcy to Katniss Everdeen. Now there’s one bow and arrow even Cupid can’t handle.

Rita B. Skeeter is a character created by J.K. Rowling, Channeled here by our friend Cheri Higgins.
The image of Miranda Richardson belongs to Warner Brothers, undoubtedly...
Posted by Hart Johnson at 12:00 PM

Is it weird for me to be strangely attracted to Ms. Skeeter?

And why did they leave Hermione's revenge out of the films? That was one of the best parts!

*giggles* Attracted to Rita, eh? She was who I dressed as for the Book 7 release--mostly though, because she is the character who looks closest to how I look.

Totally agree they shouldn't have cut that from the movie!

Wow! Bellatrix and Jacob. My head would explode from weirdness. So funny! I love that picture of her. She's so easy to hate but looks so crazy-put-together. It's wonderful. Amazing writing done here!!

I second Leanne - Darcy and Katniss?!? It boggles my mind to no end. Good to see you out of retirement, Rita! ;)

I love this mash up. It reminded me of George Castanza's "worlds collide" theory. It always ends in chaos and delusions. Marvelous post.

And a personal thanks to Cheri as I am incapable of writing a proper delusional piece. This was absolutely fabulous!

Hi,
I found your blog from Rach Writes Crusade. It's been amazing to see how many of us writers are out there.

Cute voice.
Anyhow, thought I'd stop by and say hello. My blog is www.idevourkidbooks.blogspot.com

Great to see you come out of retirement, Rita. I am not sure I ever liked you (so great was the hold that immature brat had on our collective), but I always admired you for being so ruthlessly professional.

And this is some great gossip. Bella Swan and Ron Weasley- now that is a match made in heaven.

Sorry for commenting so late- I do not subscribe to this newspaper, and found it wrapped around a bunch of grapes today.