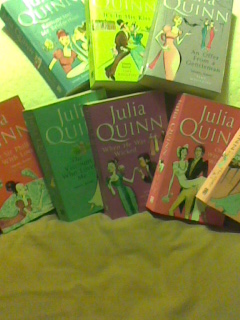 Happy Valentine's Day one and all! In honour of the occasion, this post is dedicated to the romance genre, and I'm quite happy (for once!) to be doing a 'Reading Monday' post. I've been reading 'fluff' (as I like to call it, which is in no way a derogatory term by the way, far from it) for almost twenty years, so obviously I'm a fan. Of course, I'll read - and enjoy - just about anything (as long as it isn't anything to do with maths or science), so calling myself a 'fan' is maybe a bit of a stretch, but I have to admit there are certain times when only fluff will do. It's usually light reading, and as a general rule tends to have a happy ending, so it's an excellent form of escapism.


Romance is usually termed as 'Chick-lit', and probably rightly so. Most men either don't 'get' romance (rather like I don't 'get' maths and science *snort*), or will never admit to enjoying it simply because the words 'enjoy', 'romance', and 'men' in one sentence are liable to cause most of the male population to come out in hives. In all fairness, a lot of women are wary about admitting a fondness for fluff too; it just isn't considered a 'cool' thing. This, I personally think, is completely stupid. *nods firmly* The romance genre is one of the most marketable genres out there, so it's not like you'd be admitting to being a freak if you decided to declare your liking for it. There are plenty of fans out there, closet or not.

I admit, my reading range is fairly wide, so romance isn't the only thing I enjoy, and usually whatever book I am reading tends to reflect my current mood, so I could go months of reading anything but fluff before I get back to it. But although I've been reading fluff off and on for a long time, it was only really two years ago that I started reading it fairly regularly again. I had major computer problems back in 2009 and consequently found myself with large chunks of time to fill in place of my usual evenings on the internet. My local library is fairly small, so as I worked my way through it I inevitably arrived at the romance section, and soon discovered the delights of Julia Quinn.

Julia Quinn writes historical romance, which apart from my annual reading of Jane Eyre and Pride and Prejudice, was pretty much uncharted territory for me. I selected a couple of titles randomly from the shelf - mostly because the covers appealed to me - and took them home with a bunch of others. I think, if I remember rightly, I read the other selections before I got around to them, as I wasn't really expecting to enjoy them.

But I was in for a surprise, because I really did enjoy them. Despite the Regency references, and the more formal turn of phrase, these books could almost be set in modern times. There was none of the stuffiness that I'd expected (I don't really know why I'd expected stuffiness, I just did) and the humour running throughout was enough to make me snort a fair number of times. Quinn tends to write some spicy scenes too - another thing that I'd somehow never expected from a Regency novel (oh how innocent I was *smirk*) - but it is never overly done, and it somehow ends up being sweet as well as spicy, which is definitely more to my taste than out and out smut.

Yes, I know. You would think that as someone who sees smut in pretty much everything, I would enjoy reading it, but despite my love of all things innuendo, I can be somewhat prudish when it comes to my reading material.

Anyway, back to Quinn. The majority of her novels - although they can be enjoyed independently - are either half of a duo, or form part of the eight book Bridgerton series. I don't really think I can pick a favourite because they all have elements that I have enjoyed, but at a pinch I would most recommend the Bridgerton series. The series follows the relationships of the widowed Lady Bridgerton's eight children, and they are full of fun, sparkle, and memorable characters. As well as the main characters, Quinn has created her own little Regency World, and she has a fabulous cast of supporting characters that usually find themselves popping up at the inevitable social gatherings that were so central to upper class Regency life.

I think this is why I enjoy these books so much; not specifically for the romance itself, but because I love the array of characters that Quinn has created. I think the books are definitely more character than plot driven, and my own personal preference has always been for character driven novels. Quinn's characters are fun, funny, and fabulous to be around. And the fact that a familiar character is usually in the background in all of Quinn's novels makes them very comfortable reading. Just the ticket for those days when you are not feeling yourself.

And you know what? I actually spotted a man - yes! A male of our species! - picking a few Quinn titles up from the local library not too long ago. Okay, he was probably picking them up for his wife, but I choose to believe otherwise. *nods*

Anyway, for those of you would rather have your teeth pulled without anaesthesia than read a romance, grab one of Quinn's novels and have a go. You never know, you might like it.
Posted by Amber T. Smith at 12:00 PM

So if you aren't feeling yourself, who ARE you feeling? *shifty* Seriously though... I actually LIKE chick-lit but NOT romance, I think because chick-lit has a little personal journey included and the HEA ending isn't mandatory. Cuz see... I don't think a MAN ever solves ANY problems, except maybe that little itch ifyourknowwhatImean...

Very nice review though--and I agree with you on the character thing... so I may have to open one up and see...

Tami - the whole HEA thing is the purest form of escapism there is though... And yeah, on the whole I agree with the 'not needing a man' thing. I sometimes think that the romance genre should be melded with the fantasy genre anyway. Romance novels usually slip in to the realms of Never Gonna Happen In A Million Years. *smirks*

Not that I'm cynical or anything.