I could finish that sentence so many ways, and most of them would not fit the meter of good ol' Deck the Halls very well at all... Or I could follow in the well-trodden footsteps of my fellow retail-slave and vent about the rude customers and stressed-out workers that will be filling every store...

Or I could actually take the "season" part literally, and say "Hey! Where's my snow?!?"

Friends have reported snow in Minneapolis and New York, in Russia (and Alaska...) and Scotland, but here in Boston I've spotted nary a flake. Had a small dusting out in the suburbs where I work today, but at home? Not even a hint. I'm sure many of my neighbors are cheering this fact - after all, no snow means no shoveling, no trudging through drifts to the train, no fighting for cleared parking spots. But it also means ugly bare branches, brown frozen earth clods, and the need to bundle up without the reward of throwing a snowball at the bratty kid down the street. 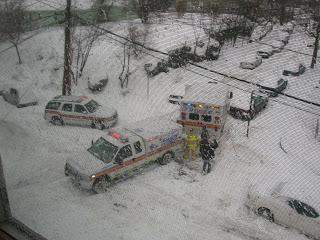 The picture up there is from a particularly nasty storm that hit us about 4 years ago; note the three different rescue vehicles all trying to make it up the hill, which hadn't yet been plowed. That's the thing about living next door to an elementary school - on weekdays, you'd better believe we get plowed out first thing. Weekends, though? Not so much. I was about 3 hours late to work that day, as despite having my car fully dug out by about 9:30 AM, the plows didn't come through until sometime past noon, and if those vehicles (with their four-wheel drive and snow tires no less) couldn't get out, I sure wasn't going to risk my neck trying.

But one of the greatest things about a snowstorm is the absolutely guilt-free day of reading and relaxing that comes when work is canceled completely. I don't care how old you get, a snow day never quite loses its magic - a day that had been consigned to the usual drudgery redeemed by beautiful (if dangerous) white, staying indoors and drinking hot chocolate (by the pint, in my case - damn, I love hot chocolate!), and snuggling down with the book or movie I've been saving for just such an uninterrupted stretch. One year I blew through three Philippa Gregory novels during a storm; another I settled in for a Pixar movie marathon while knitting a complicated pair of twisted-stitch gauntlets for my best friend.

So maybe it's no wonder that I'm a wee bit crankier than usual so far this December - but if you happen to wander by the day after we do finally get a good snowfall (because I simply must believe that it will arrive), you might want to keep an eye out for flying snowballs. You know. Just in case.
Posted by ViolaNut at 12:00 PM

Since I'm homeschooled, when it snows outside I don't even get snow days . . . LOL. But I don't mind. I get to go outside and have fun in the snow, even when the roads aren't bad.

But that feeling of being able to do whatever is great. Free time at last! Hope you get a good snowfall!

I love snow days. However, we don't get them until there is at least 12 inches of snow on the ground. The Department of Ed. will let us off early if and only if during the day we get 1 foot of snow. Isn't that horrible?

I think in my 10 years at the University we've only had snow days twice (though once was 3 days--it was BAD that year). Michigan has most of the students living on campus and is set to plow, so we just don't get them very often (though the public school calendar PLANS for 3 of them--wish I worked for them!)

Golden Eagle - You should have snow days anyway. :-) Make up a lesson. It's all good.

Chary - It used to be that we never got 'em either, but there was a bad storm a few years ago that hit at around 1 PM on a Thursday (that was my Pixar marathon) where everybody and their brother decided to let their employees go home around 3 PM, which is also about when most of the schools get out. Result? Nightmare on the roads, kids stuck on buses for 6, 7, 8 hours, people running out of gas on the highway because they were stopped so long... So we get snow days now. :-)

Tami - we had a couple in Rochester in 1998 that were supposedly the first in 30 YEARS. The sidewalks were piled 8 feet high and I had to walk down the middle of the road. Was kinda fun though. The calendar here provides for 5 snow days. Go figure.