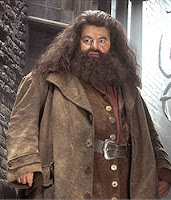 This is a major coup--the fact that we Burrowers have some truly impressive connections. I first met Rubeus Hagrid in person a couple years ago when I was a staff member for a monthly online rag called The Quibbler.  Hagrid had a section called Kreecher Feetcher, in which he would share with us more in depth details on certain creatures.  We asked him to do a little version here on Burrowers, Books and Balderdash having to do with Christmassy Creatures.


It’s that tyme agin, another month and another Kreecher Feetcher at yer service. I have a reel surprise fer all my magikal reeders out there; this month’s feetcher is all abowt “Christmas Kreechers”. So pour yerself a nice cup o’ tea and get ready fer a real treat.
Last month I took a hike up in the mountains to visit my half brother, Grawp. On my way up, I had a fantastic exchange with a jarvey ( foul mouthed weasels), whom I have affecshunatly named Effie as “F” seems ter be her favorite letter. She had followed me fer a few miles callin’ me all sorts of funny little names when I finally stuck her in my pocket. She seemed right comfortable there, so she’s been my travelin’ companion ever since. After New Year’s though, I’m startin’ her on some lessons to get her speakin’ like a proper lady. 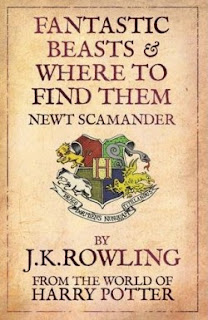 I also had the rare oppurtoonity to have a run in with a reel life yeti. Tha’s right, an abominable snowman! Let me start with sayin’ that their size has been greatly exajurated—this one weren’t no bigger than me! Aside from that though, their description by Newt Scamander in Fantastic Beasts and Where To Find Them jus’ abowt does ‘em up right. It was a bit like yours truly-- big, mad, and hairy!!! I tried to calmly walk up to it, but the beast wasn’t havin’ none of that. He must have been protectin’ a nest of baby snowballs, because he charged us barin’ his fangs and claws like a Veela in a tizzy. I would have a nice picture fer ya, but I can’t figure out how to work this camera the Quibbler supplied me with. If You can imagine it through, it looked a bit like a smallish mountain troll covered in white fur and the face of a Manticore. Now, I won’t go so far as ter say they are mean kreechers exactly; jus’ misunderstood is all. I’m sure there was a perfectly good reason he was tryin’ to make snow kabobs outta Effie and me—I bet he was tired and jus’ didn’t know his own strength when he threw that spruce at our backside!
Not too much is known about yeti’s in general. European yetis are mostly found in Tibet, but the American Yeti ventures all over the upper and lower porshens o’ the continent. The South American yeti has been a thorn in the ministry’s side fer years as it keeps getting’ seen by muggles who like ter call it “Big Foot”.
Fortunately, most muggles think it’s all a bunch of codswallop and dismiss the yeti as crazy talk.
I know a lot o’ my young reeders are wanting ter know abowt a certain type o’ reindeer that can fly and pull a sled full o’ toys. This kreecher is a bit trickier than the others, and you won’t find them in any book abowt magical kreechers because they aren’t naturally magic at all. Hopefully I can explain this properly. Reindeer aren’t so much deer as they are a funny mixed bag o’ kreechers. Ya see, a long time ago there were herds o’ centaur that lived in the very northern regions o’ Europe and America. Their numbers dwindled very low due to a tragic misreadin’ of a planetary line-up in sky. Many were forced to wander alone, and centaurs aren’t used to travelin’ like that—they’re meant ter be in a herd. Anyway, long story short, bein’ alone wasn’t workin’ for ‘em. Most of these scragglers went a bit loopy and took up with the native caribou herds, which later led to “reindeer”. All reindeer really are is caribou that talk. Reindeer have slightly different tradishuns than centaurs do. They don’t hold much stock in the stars and planets and what not, but they do have their own form of divination that focuses on the Northern Lights. They can’t fly either, but a good hover charm can trick a muggle just as good as any. Anyway, that’s what reindeer are and if ye ever happen ter meet one, don’t menshun Rudolph. His kind see him as a bit of a show boat. And don’t go askin’ yer friendly neighborhood centaur abowt reindeer either, cause they don’t like ter discuss them at all.
What abowt Santa’s elves you ask? Well, this won’t be much of a shock to most of you, but some o’ the muggle-born’s may be interested to know. Christmas elves aren’t no different than any other common house elf. The cloth that a house elf wears varees regionally; tha’s why many pictures of them show red and green colored outfits. Sorry to let ya down, but house elfs are nifty little kreechers any how and they are definitely more than capable of fillin’ yer Christmas stockings!
Well, that’s it fer this month’s feetcher. I hope you enjoyed it. Be sure to come back next month for a feetcher on Golden Snidget to celebrate the start of Quidditch season! Have yerself a great hollyday and have a pint o’ Christmas cheer fer me!
Image Rubeus Hagrid
Hagrid is channeled by Burrow Buddy Marissa Montano

Very clever! This made for a great coffee break.

Fantastic. Rissa, you are a genius!!!

I always wondered how those reindeer flew! :D And on another note, another HP side book? I guess it's hard to leave the world if you're the creator, yes? <3

Leigh-Fantastic Beasts and Quidditch Through the Ages came out the same year--maybe 2006? and were sold as part of Comic Aid, which I think is directed at international hunger. They were more a 'satisfy the waiting public' than anything else, I think.

Too cute! It's not every day one gets to read a post by Hagrid! Loved it!!

I love this! A blog post by Rubeus Hagrid--who would have thought?