It's the same date every year...

Okay, so I got out of the whole my-imaginary-friend-is-better-than-your-imaginary-friend mess years ago, but my family is still all about the Xmas. Which means that, like a couple billion people around the planet, I have to find presents for them (and my friends, of course, because I wouldn't even be approximating sane without them). However, I am a Knitter, with a capital "K", and therefore I make as many of my gifts as possible (especially this year, when I have very little money and yet giant heaping piles of yarn that I've been stashing away). You guys have probably figured out where this is going already, haven't you?

Now, I know perfectly well that the damned thing falls on the same date every year, and therefore I should be capable of proper advance planning and get everything worked out and knitted well in advance so I can bask in the glory of completion (preferably with a nice mug of hot mulled cider in hand). However, this doesn't factor in two things, one of which I deal with all the time (procrastination) and the other - well, see, it's like this:

Those friends I mentioned above? I love them dearly. And some of them have been busily reproducing this year, which means - you guessed it - I've been knitting baby things instead of Xmas presents. Now, I don't begrudge 'em for a moment, because I have the absolute most wonderful friends on the whole planet (I am reasonably certain of this, because they live all over the planet). Wanna see what I've been coming up with?

This is a Baby Surprise 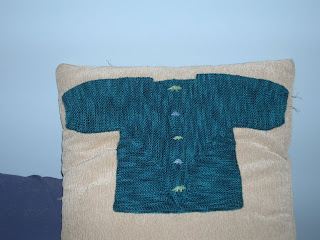 sweater (check out the dino buttons!!! Win!!!) that I made for my friend Sonya's third child (and second son) Rowen. Despite the fact that it is worked entirely in garter stitch (for non-knitters, that's the easiest possible thing to do - you just make the knit stitch over and over and over and over until you're ready to scream) and has only two short seams, it's also got 6 stitches to the inch and it took forever (partly due to the boring stitch). But it turned out looking pretty good if I do say so myself (and besides, come on, DINOSAUR BUTTONS!!!).

However, notice that I said it was her third child (which is terrifying in SOOO many ways - we've been friends since we were freshmen in college)? Being an older sibling myself (though fortunately only to one), there is no WAY I'm leaving big sis Makenna and middle bro Caden out of the gifting - so they got sweaters too. Here they are: 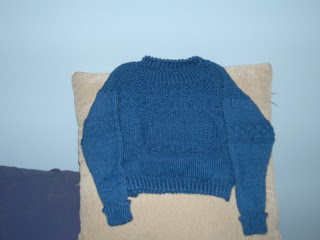 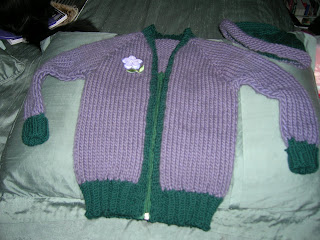 So a zippered jacket on the one hand, and a cotton denim gansey on the other. Those weren't small projects, either, despite the fact that they're for a 5-year-old and a 3-year-old. A word of advice - never attempt to sew in a zipper when you're tired. :-P 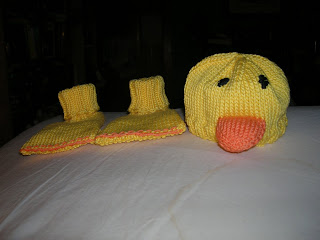 riend (whom I've known even longer - since I was 15 or so) had a second baby due this fall too. Since he and his wife were being stinkers and not finding out if it would be a boy or a girl, I had to go gender-neutral. Fine, I said. If you people are going to make me knit in yellow, then you're getting a duck! Heh. It still makes me smile to look at it. Anyway, Ruby Joy arrived healthy and beautiful, but as mentioned above, was also a younger child... so for big bro Harold, in honour of his Aussie mum... 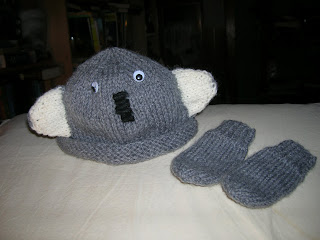 A koala hat! And mittens. I couldn't resist the googly eyes, either, but I certainly sewed them on with a ridiculously redundant amount of yarn. And probably thread too. And knotted it a whole bunch of times, just to be extra sure. Oh, and that's Australian merino wool as well, because seriously, knitting an Australian marsupial with American or even British yarn just does not seem like the thing to do, you know?


Okay, so that explains part of it. Then there are the birthday presents (one of which I still haven't finished... eurgh...), the most pressing of which being for my dad, who has the unbridled temerity to have a December birthday. I mean, honestly, as if I didn't have enough to do this month! So I borrowed my best friend's husband to go tool shopping (I can safely say on here that I got him some fancy-pants thing that has about a zillion different attachments {for screwdrivers, socket wrenches, and who-knows-what} because he honestly doesn't know how to use the internet), but still am only about 3 1/2 feet into a scarf that should be close to 6 feet long. Then there's the belly sweater for the aforementioned BFF, 'cause I'm barred from making more baby stuff until she hits her third trimester. Okaaaaaaaaay... I can handle that, I suppose.

Email ThisBlogThis!Share to TwitterShare to FacebookShare to Pinterest
Labels: Knitting, Leanne Rabesa, Who am I? Friday

I'm a gift-maker, rather than a gift-buyer, as well. I hit an all-time low a couple of years ago when I realised in July that I was already behind. :/

Oh, Leanne- you are a SUPERSTAR! Those are CUTE CUTE CUTE!!! LOVE the duck stuff (being an Oregon Duck). Red is another gender neutral color--it is the favorite of BOTH my kids--with the son it showed up very young. But the duck and koala... TOO CUTE! (and that sweater for McKenna is fabulous! The boy ones too, but I am definitely into girlie baby clothes... not GIRLIE, but you know... girlie...

Cute is what they are indeed. Great!

Have a nice day, Boonie

Exhausting. Love them all but those duck booties are soooo cute, and the koala hat is gorgeous.

I'm with you on the cultural clash with yarn, I'm learning to knit socks in Australia with a New Zealand product made from NZ merino, alpaca and possum fur (the last is native here, but a pest there, and super soft and warm). The instructions are American. It's doing my head in - and the fact that it's 2 @ a time, toe up, on circular needles.

Good luck!!!!! Otherwise will an IOU and photo of the pattern you were going to do work? .. I suppose not.

Su - you win, I usually start in August!

Tami - the other gender-unknown baby got the frog flippers and eyeball hat, but those were done back in April so I didn't think I could use them as an excuse NOW. ;-)

Golden Eagle - I should try to knit your namesake then, eh?

Sue - I LOVE toe-up Magic Loop socks - they help me do two important things. 1) Use up ALL the yarn and 2) Finish both socks at once so I don't have a lonely one hanging around. :-)

Fantastic!! love the duck and koala! its been ages since i knitted anything, but this makes me want to take it up again!