When should the Tree go up? 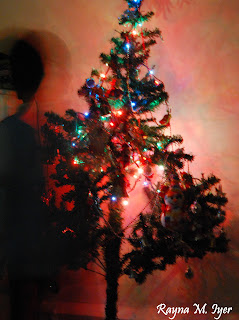 Some of you are aware of my misadventures with the Christmas tree, but for those who came in late.....

Last week, after watching the kids decorate the tree, I had just turned on the lights, and stepped back to admire the sight, when my younger one went to take a closer look at the ornament and managed to knock the whole tree over. Two days later, when I was rushing to drop the kids off to the school-bus, he managed a repeat performance all over again, causing me to blow my top off, before banishing the tree to a corner where it just could not be reached.


Part of the reason why the tree came down twice in two days is my (nearly) five year old son. I have been hearing all of you go on about the adventures of your cats, but trust me, Thing Two can be more destructive than Bella, Angel, Callie and Flower put together. But TT (Thing Two, not Thursday Twin) is not the only reason for the tree toppling over so often- the main reason is that I did not store the tree too well the year before last, and the base got dented and made the whole tree really wobbly. 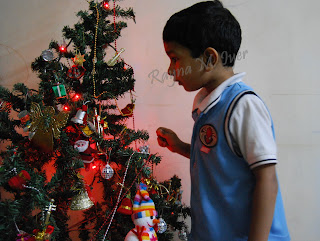 Last year, I promised to get the kids a new tree, and in the second week of December, I finally went to the market to keep that promise. Guess what I found - lots of thinsel, and plastic candy canes, and Santa hats, but no trees. Yes, you heard it right- not one single tree over two feet in height was to be found ANYWHERE in the ENTIRE market.
"Come back next week", they told me politely. "We will definitely have bigger trees then."
"But Christmas is in ten days", I sighed.
"Yes, Madam. Christmas is on Saturday. After that, you will get many trees. Many varieties of trees."
"But I need a tree before Christmas. Not after it", I said. "What will I do with a tree after Christmas."
"But, Madam, everyone buys a tree after Christmas", he explained patiently.
"Where will I put my Christmas presents if I don't have a tree?", I wailed.
By then he must have thought I was a certified nutcase. "Come back next week, Madam. You will find many trees", he said before turning his back on me.

Ridiculous though it may sound, in India, the official date for unveiling the Christmas tree at home is December 25th. Hotels and malls take down the Diwali decorations in the last week of November and replace it with Christmas decorations, but houses wait till Christmas to put up the tree up. 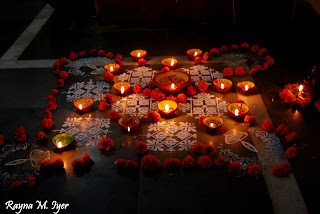 In a way, it does make sense. Christmas is not really a 'festival' for most Indians. It is a tradition that we have picked up along the line, and incorporated into our own. In India, we need an excuse to party- Diwali is one such excuse, the one immediately after is the New Year. When you throw a Diwali party, you decorate the house with candles, marigold flowers and floor patterns. When you throw a New Year Party, you have a tree.
Since New Year Parties typically happen on December 31, there is really no reason why the tree should be up before December 25, is there?
So, if I want to avoid tree toppling incidents next year, I would be wise to brave the crowds tomorrow and get myself a new tree. 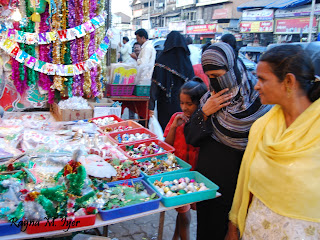 Email ThisBlogThis!Share to TwitterShare to FacebookShare to Pinterest
Labels: Christmas Tree, India, Rayna Iyer, Who am I? Friday

I like this! It is madness but it is madness after my own heart. I wish I could send you a tree. did you know, Natasha, that Lunenburg county (just south of where I live and where my grandkids live) is the Christmas tree capital of the world??????
love you - have a wonderful mixed up celebration - I know I am.

In Norway we typically decorate the tree on "Little Christmas Eve" - December 23rd. That way it is up for what we consider proper Christmas - Christmas Eve - and the "in between days" before the next big celebration on New Years Eve. Many Norwegians keep their decorations up for at least two weeks, which means Christmas extends far into January.

Hotels and shops and such, though, often start decorasting for Christmas in October. Now THAT is too much!

When I was little my parents would put the playpen around the Christmas tree so I wouldn't climb it...

Culture shock pops up in unexpected places, doesn't it? I hope you get a fabulous tree. :)

We put ours up on Christmas Eve & take it down Jan 6th.