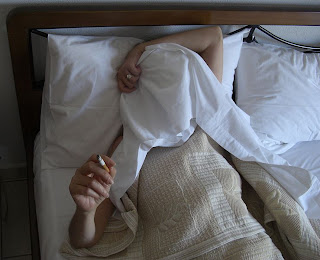 Know the stereotype about sex and then a cigarette? Well, don't do that. I KNOW finishing a manuscript is a much bigger deal than simultaneous orgasm and a much much bigger deal than one then the other, but there is a danger that if you hold something burning too near your freshly completed manuscript as its shiny newness wears off, you might just set the thing on fire. And really, you don't want that. Besides, smoking is really bad for you and makes you stinky and keeps your partner up at night because it gives you a really obnoxious cough... (am I projecting?)

So anyway... I technically just finished the first draft for book #8—nuts, that... In fact if you count my novel-length fan-fiction, it is #11, and numerologically, I am an 11... so is hubby, daughter, son, and mum (FREAKY!--Leigh, is it you with a child afraid of the number 11?... but never mind...) I thought it might do to talk a little about what REALLY comes next... after you finish a first draft...

Am I the only one who, on finishing a first draft thinks... 'oh...' That's it. No profound jumping around (except the posturing for Facebook), no running through the streets naked (or no more than usual), just... oh. It's over.

I think there is a massive struggle here... the UMPH of accomplishment battles the mourning for the end of a story well told... (or at least well conceived... or... well.. FINISHED anyway)... your characters are DONE. It is bittersweet a little. Like a college graduation where you've done something really BIG but now all these people you've grown to love are going separate ways—these people who accomplished something BIG side by side with you... Just me? Somehow I doubt it, since you all are vying to be NUDIST clones (or maybe I've just made an observation that we writers are not so different, one from the other, in how we process some of this stuff). Even in a series there is a bit of mourning for the plot completed... It's just a mixed bag of emotions OVER WHICH YOU SHOULD NEVER SMOKE.

But perhaps a wake is in order... some good wine... bubbles (whether you like them in a bath or blown). These beings you've created have done a big job, ne?


But after the celebration, then what?

In my infinite wisdom I have a little advice.

DO NOT YET EDIT THE THING YOU JUST FINISHED. If it is NOT really finished... like if you hit 50K in NaNoWriMo and the book isn't done, by all means, keep going. But if the story is DONE (even done with gaping holes), I DEMAND you set it aside at least 30 days, preferably 60-90.

READ! You've probably put something on hold while you madly wrote. Read two books now... something you highly aspire to and something you can deeply criticize... a good and a bad example, if you will.

WRITE something else... ideally something that allows you to let loose a little—a short story is good... Maybe in a genre or PoV that is unfamiliar... STRETCH. Know how after a long workout you are supposed to WALK until your heart goes to normal or the blood will pool in your extremities? You've just finished a hell of a workout. You need a cooldown or your writing muscles might atrophy... they may then rebel next time... write something that is REALLY FUN to write so your writing muscles love you again.

After a brief break (maybe a week or two) of this frivolous stuff, EDIT SOMETHING ELSE. Last year's NaNo, half a novel you've got going, find something you already did that needs improving. WHY, you ask? To get used to the idea that you have to alternate... write, edit, write, edit, write, edit. The reality is, for those of us who've come to love writing FAST for first draft, we probably need to schedule DOUBLE the time for editing. And maybe some of us wrote five books in the last year and didn't edit nearly enough and are trying to come to terms with better habits... *cough*

So how do y'all cope with that decompression thing.... what do you do next?


And just for the sake of full disclosure, my plans: 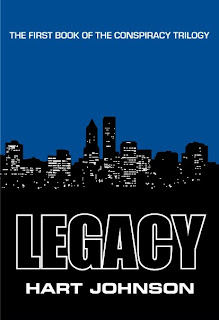 December: Penultimate edit of LEGACY (my second book finished, and suspected sexiest sell), respond to any change requests for my Cozy (my agent has had it for the month of November, and it is due to my Editor December 31). Then POLISH Legacy and send to a few new readers.

January: discussion with agent about Legacy, if she WANTS it, send. If she DOESN'T, work like hell to get a pitch ready for ABNA. If she DOES, mad scramble to edit something else for ABNA. Current contenders are:

Kahlotus Disposal Site: YA from the perspective of a ghost. The asylum in rural Washington State where Helen committed suicide 60 years ago is being reopened as a Juvy detention center, and some small portion of the new residents can see her... one in particular needs her help.


CONFLUENCE: rewritten as a YA: A teenage girl is forced to move with her long-absent dad and his new family, but her dad's job offer had ulterior motives that have more to do with bloodline than academic acumen. Jessie learns a lot of strange things while her five-year-old half sister befriends a homeless man. When Hannah is kidnapped, Jessie is the only one with enough information to figure out where she is and rescue her.

So those are my next three projects... I will DEFINITELY get LEGACY and one other polished. THEN I need to start writing my next Cozy (which I'm excited about)... polish the 3rd above... edit and polish the cozy...

That should take me about 6 months... and if in six months I write a book and polish three, I am doing good... it balances what I did last year where I wrote a lot and only polished a little...

(did that make anybody else tired?)

Though anyone who KNOWS me, knows about me and PLANS. I adore making plans... chances are somewhere along the line I will get a bug and write something anyway...

I am still editing the story that has become The Manuscript From Hell. Some days I think I will never finish. It's making me CRAZY!!!

SO proud of you! Go Tart! I'm pretend smoking a ciggy right now. Like a mime.

I love your advice on the writing/ editing strategies. Unfortunately, I'm not at that stage yet. I need to finish my first work of fiction. :(

However, where cigarettes are concerned. I have not quit but I did cut down to 3-4 per day. Smoking after sex is wonderful, not sure if I can give that one up. :D
*sheepish*

Carole- A manuscript written from HELL! That is a FABULOUS idea! teehee

Chary-you'll get there! You have a crazy, busy schedule at this point. Maybe try my trick and as your youngest gives up reading with you, insert writing--it's like time for free!

Thanks, Hart. I needed this advice. I knew I needed to set the NaNo novel aside for a while--I can't bare to think about it, honestly :) --but the question was what to do now. You've got some great tips. Thanks a ton :)

I'm on my fourth draft and I still don't feel too terribly giddy. I've got to get an agent first before that happens. :p

Ha! Rosie, glad the advice was timely for somebody!

Amanda-yeah--those middle drafts can be rough--it's discouraging when is is ALMOST there, but then you think maybe you missed it completely. I am on about draft 6 of my FIRST and am back to thinking it's really not done... we just keep swimming...

ha ha! we are soul sisters. I love the plans too - the big elaborate plans. I'm tired now and my day has just started. Thanks a heap!