If you haven't heard about Wikileaks by now, then you obviously aren't connected to the Internet... which means you must be reading this from a printout that a friend made because you're both such big fans of the blog. Wow. Thanks!

So, having embarrassed the U.S. federal government (is that so hard, really?), the folks at Wikileaks have apparently gained the confidence to come after yours truly. It seems like a lot to take on at once, right? But when I inquired with my lawyer about the possibility of legal action, he pointed out that any action I might take against the 'Leakers would be like a crippled baby vulture trying to peck some flesh from a wounded moose that's surrounded by a pack of ravening sharks. He's obviously not a nature guy, but you get the point.

Now, I'm normally pretty careful with important documents, but in a way, that's what led to my downfall. I had most of my hard drive backed up with a remote data service, and they got hacked by a third party who sent my stuff to Wikileaks. My lawyer strongly advised me not to give the name of this remote data service, as they apparently can't be held liable and I cannot prove negligence. Personally, I think my lawyer is dating one of their lawyers, but if true, all the more reason to take his advice, right?

I considered paying blackmail, if a reasonable offer where made. But my lawyer strongly advised against that, saying that funds would be much more effective if spent on legal counsel. Surprise. Said lawyer also suggested that I could mitigate the damage by preemptively posting the most embarrassing documents myself, in a format where I would have a chance to present some kind of defense. He then advised me that his "suggestion" was just that, and not legal advice per se, so if the attempt failed miserably it was on my own head.

Nonetheless, it seems like a good idea. So here I present a representative sample of the documents that I expect Wikileaks to be posting within the next few weeks. I beg of you, do not judge me too harshly. Remember that I am not some silicon monolith, impervious to harm, but a mere human being-- weak, flawed, sensitive, and squishy.


Let's start with my email archives. There are quite a few things like this, which don't look so bad at first glance:

From: Joyce Baxter To: Jason Drake
Subject: Re: Re: Dinner tomorrow!

Oh no! Well, you have to take care of family. I hope she gets better
soon.

I'm on my way to pick up mom & dad at the airport. See you tomorrow night
at six. They're excited to meet you!


But then there's more:

From: Alan Redlan To: Jason Drake
Subject: Re: Re: Moving Day

Hey, gang, we're all set. Let's meet at my old place Saturday morning at 8. With
everyone pitching in, it shouldn't take too long. Pizza is on me. Thanks again!


Well, I'm sorry. Who doesn't fib a little? But I've already got my comeuppance:

From: Silverlady To: Jason Drake
Subject: Re: Re: Missed you today

Thanks for your concern, dear. But I'm feeling just fine.
See you Tuesday.


At least with email, you have the expectation that other people are reading your words. But I also use my computer for a personal journal, writing down ideas, and stuff like that. It's really just a way of recording some thoughts, which makes publication of documents like this a pretty unfair intrusion:

Online Dating
Pro: Can tweak images before uploading so those shallow tarts will have a chance to judge me on my inner qualities
Con: Deceitful witches likely to use altered images, making it hard to weed out the uglies


Church, general
Pro: Good for weeding out freaks with lots of piercings and tattoos
Con: Insincere intentions could lead to eternal damnation

Pro: Nice, virtuous women
Con: No easy women. Will have to buy the cow before tasting the milk

Jewish
Pro: Women desperate for same-faith partners are notoriously easy
Con: Honestly have no idea if the above is true, just saw it in a movie

Mormon
Pro: Unusually high percentage of buxom women
Con: Will have to spend rest of life taking coffee on the sly


Star Trek Conventions
Con: No actual women
Pro: But, still, I'd be at a Trek convention, which is awesome

Just idle, random thoughts. Think of it as more like a dream I can't control than a collection of actual opinions and plans. Also, if anyone has any novel ideas, please share.


Next comes the following, which-- at first glance-- is a little too organized to be classified as "idle musing": 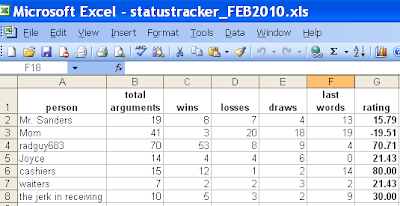 Folks, I was testing out some spreadsheet functions. That's it. There is nothing "real" about that document. I swear!


Finally, the worst of the lot: poetry. Most of us think of poetry as something that shows up in literature books, or gets read at an inauguration. But a lot of people write poems that are never intended to be published or shared in any way. It's just an outlet for personal feelings.

Carroll and Schneider had made their plan
And watched the NFL draft unfurl
When the time came for pick number eight
They took Okung, he's solid, great
But at fourteen came Thomas, Earl!

Safeties are rarely drafted so high
Had the front office botched the deal?
Earl was young, but manly
And his instincts, uncanny
He might actually be a steal!

By opening day, Earl was the starter
He took the field in a streak of blue light
With the veteran Milloy, he'd get things done
They were like the holy Father and Son
Leading the glorious fight!

The San Diego Chargers came to town
A frightening offensive juggernaut
Thundering down the field, again and again
The hated Chargers seemed destined to win
Their quarterback's hand was hot

Seattle lost the lead, but took it once more
As the clock ran down, the Chargers needed a score
Again came the storm of passes complete
Against a secondary that was tired and beat
But on the goal line in this hour so trying
Patrolled mighty Earl, with dreadlocks a-flying
He shadowed a receiver-- an incomplete throw!
The Chargers had but one down to go
They huddled up and made their best call
The quarterback dropped, made a perfect read
Hurled the football with precision and speed
And Earl intercepted the ball!

Okay, I love Earl Thomas. There. I said it. But ninety-nine out of ninety-five Seattle Seahawk fans would say the same (four will be drunk and repeat themselves). I mean, look at this guy play! That's not even his best pick, and only one of two against the Chargers!


Well, that's that. If my humiliation isn't complete, it will be after I pay this bill from my lawyer.

BUWAHAHAHAHAHAHAHAHAHAHAHA! What beautious Jasonness... I fell over three times. Though if we ever decide to go out for a beer, I am calling your grandma first to make sure you don't pull that crap on me.

HAHAHA, this is great. I've gotten nearly a hundred stupid emails about this wikileaks garbage, I'm so glad to see someone finally poke fun at it. As an intel analyst, I got to say you had me cracking up. I'm also reclassifying all documents to their proper clearance level and will release them back to you after they have been properly disseminated. In the meantime, I'm going to have to penalize you for posting classified information to begin with. It doesn't matter if the information was leaked. Releaking leaked leaks is inappropriate and detrimental to national security. I will classify you (and your mom, for good measure), and release you in the usual 88 year time frame on which the information is no longer considered relevant.

*snort* I'm with Tami on the grandma-checking. ;-)

Too funny! Thanks for the laugh!