I can only hope, my friends, that you have a chance to read this before our blog is mysteriously deleted and I am hauled off to a frigid concentration camp.

I don't mean that it's "bad" in the sense that hurricanes, floods and earthquakes are bad. All of these things cause damage, but most natural disasters make no effort to evade responsibility. Snow, on the other hand, pretends to be our friend. More importantly, it attacks with deliberate malice.

Let's say you wanted to form an evil, fascist organization to carry out a reign of vicious destruction. You wouldn't just jump in and start killing people, right? You'd commit those acts of terror in little bits and pieces, so as not to alarm the populace. You'd look for a scapegoat to shift blame. You'd recruit followers with vapid slogans and nifty uniforms. Above all else, you'd saturate the public with an intensive propaganda campaign.

Snow does all of this. And therein lies the proof.

Quick, what causes an avalanche? Did you say 'loud noises'? Maybe 'steep slopes' or 'rocks'? You've been hoodwinked. They're caused by snow.

Why do drivers slide off the road? Bad brakes, they say. Or driving too fast. Sometimes we blame snow, but just barely-- it's "snow and ice". Really, ice? Does ice fall out of the sky and blanket the roads? I think not.

Then there's the heart attacks. Seventy thousand people a year end up needing medical treatment after shoveling snow. We blame heart disease. We call it a medical issue. Snow is in your driveway but off the hook.

By spreading itself out (pun intended), snow has made it nearly impossible to arouse public concern. We can point the finger at 'Hurricane Sam' or 'The 1906 Earthquake', but such generalizations slide right off of snow (pun intended). You can't stick a name on it. At best, you'll hear a vague and scientific-sounding (i.e., boring) report about the aggregate suffering caused by "winter conditions". Really, winter conditions? That's a million people who've had the crap beaten out of them by snow and a handful of tomatoes that didn't get picked in time.

Basketball is a winter sport. So, for that matter, are volleyball, fencing, wrestling, handball, gymnastics, and weightlifting. And we have two Olympics: Summer and Winter. Or do we?

We do not. We have a general sports Olympics and a Snow Olympics.

There is no "Ball Olympics" for ball sports, "Water Olympics" for water sports, "Race Olympics" for races, or "Gym Olympics" for indoor sports. But for some reason (discrete manipulation by powerful entities, obviously), a bunch of sliding around in the snow ranks equal to all other sports combined. That's some damn good propaganda.

Imagine if we classified canoeing, bailing, kite-flying, parasailing, and running-for-your-freakin'-life as the "Hurricane Olympics". Sounds trite, doesn't it?

You can't build an evil regime just by manipulating the general populace, of course. You need a core of devoted followers. And the key to recruitment is to emphasize the glamorous aspects whilst downplaying the ugly truth. You also need snazzy uniforms and good-looking representatives. 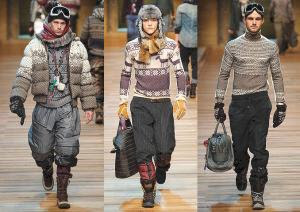 Several images come to mind when you think about skiing: There's the sharp-looking clothes, of course, worn by universally attractive skiers; then there's the ultra-comfy, socially elite ski lodge with its blazing fire and happy faces. Last on the list comes actual skiing, but even that has been carefully presented to potential recruits. Google images for "skiing" and see what you get: People flying through the air, a cluster of skiers at the top of the slope, some folks on a ski lift, etc. You will never see a shot of what skiing actually looks like from the perspective of someone in the middle of the slope, looking down at all that cold, wet, pointless nastiness.

Perhaps their most impressive propaganda coup is the appropriation of Christmas themes. What does the North Pole have to do with baby Jesus? Why does Santa have to travel by sleigh? To children, Santa Claus is the most universally recognized figure in the western world, he brings them presents for free, and his entire routine depends on snow.

And in case that weren't enough, listen to the titles and lyrics of three-quarters of what passes for "Christmas Music". It's all about the snow: Winter Wonderland, Sleigh Ride, and the sinister, eponymous Let it Snow!

So who are the conspirators? What powerful group of men is executing these murders and reaping the benefits?

Not men at all, but snowmen:

Kind of obvious when you think about it. Two prominent-but-reclusive cartoonists, Bill Amend and Bill Watterson, have tried their best to call our attention to these monsters without being snowed under themselves. They have met with limited success. Curiously, Watterson has no licensing deals for Calvin and Hobbes. Mysteriously, Amend has stopped writing dailies for Foxtrot. Plainly, both men have been caught by the Cabal of Snow and hushed up.

The panel above, from Watterson, may suggest the only reason that any of us are still alive. The Demons of Snow frequently turn their dark magicks on one another, no doubt fighting for power within the Snow Hierarchy. I shiver (pun intended) to think what will happen to humanity if a single faction wins out.
Posted by The Burrow at 12:00 PM

*wishes she could edit comments*

Anyway, what I said above was...

Luckily, I don't have to deal with snow very often in NC! But *apparently* we're going to have some on Christmas Day--first Christmas snow since 1947. The novelty will be cool...and then I'll want it to melt (which I'm sure it'll do, quickly!) :)

I LOVE SNOW!!!! And I'm super happy that we finally have some. It's pretty and peaceful and you can throw it at people. ;-)

*cackles madly* Oh this was brilliant, Jason. I'm sure you're onto something. I think there is a snow mafia that causes it to target certain areas for lack of respect.

I think you are right! Snow thinks it's so smart. I'd like to give it a good boot up the flake!