Someone, probably Stephen King, wrote about writing as time-travel. I like this concept – that I could write something and you would travel back in time to read it. Or am I travelling forward? Hey, I just ransacked Stephen King’s On Writing. It isn’t time-travel – it is telepathy. Ha! Joke is on me. I still think it is time-travel though. Because I’m the reader and that’s how I read it.
Uncle Norman (farthest left) & his air crew 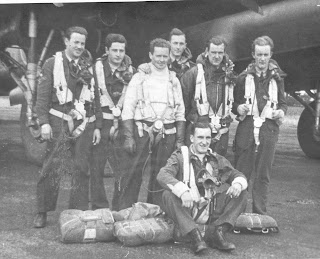 I have letters written by my Uncle Norman during the war. He was a navigator with one brother a pilot (my Dad) one in the navy and the other I'm not too sure about. The point is there were four brothers and they were all overseas fighting a war. didn’t come back though. The other three did – my Dad being the youngest and now the only one left. But – we didn’t know who he was. We knew my Dad and his family and friends called him Baldy because he had a lot of hair. My Dad and his brothers all had the Lyle Lovett thing going on – big puffy mounds of black hair on their heads – pomaded to beat the band. The point here is not my family’s hair issues though – it is that the only way I get to meet the mind of my uncle is to travel back in time via his words through his letters. I’ll read you excerpts from one – sit back.


Mar.17/43
Wed. nite
My Dear Mother & Dad;
I am sorry I haven’t written although I know I should have but the time seems to get by so quickly and really we have been kept very busy up here. It sure is a long time since I heard from you Mother but up until 1 week ago there had been no mail from Canada but in the past week I have had 1 parcel from Dot, 1 from Grace, and cigarettes from Mrs. Bryan, 4 letters from Dot and 2 from Marnie so I can’t complain. Harold Boles is here on the same station as well as Bob Samson so we do OK. I have been getting in a bit of flying but we have been mainly on ground instruction.
…
Dad you will be busy now with spring coming. I hope you aren’t rushed too much. I haven’t been out much as we are a long ways from town and we are busy the time so we don’t bother about going out much. I don’t care for the English girls so don’t bother about them. You only need to take them out twice or tell them you own a ranch in and they start naming the date. I get a kick out of them but I can’t stand their talking.
Well I must run along now so goodnite and God bless you. Write soon.
Your loving Son, Norm.
And there you were – I hope – back in – an air-base probably in the North – a young man who is dutiful but doesn’t have a lot to say to his mum and dad. Making sure he doesn’t get caught by the war-time machinations of the local girls. Who is chaffing at the bit of all the instruction and wants to get into the battle, the air, and the action. I look at the outside of this flimsy light blue paper and see that it was postmarked the next day and sent from Pershore R.A.F. Station.
When we decide we are going to write something we have a responsibility. If people are going to travel in time we need to make the story worth the trip. If I were to travel to this year – which I not-so-secretly long to do – I would be bereft if upon getting there I wasn’t able to use all my senses. I want to smell the baguettes, the perfumed air, even the dog shit. I want to see the , the women’s fashions, the . I want to hear people chattering away in cafes, the accordion player on the corner, and even the small fussy dogs. I want to feel the soft air, the piles of silk scarves at the market, and the stone wall that Hemingway may have touched on his way by. I want to taste Coq Au Vin, the sharp liquorice of absinthe, my lover’s skin in a Parisian hotel (yes, it will taste different there).
And so, if I am wanting people to travel to some part of the continuum that I have designed I want them to be seeing, touching, smelling, sensing, hearing the world I’ve created.
On my monitor I have a sticky note – it says smell, touch, taste, hear, feel, see. And I move it around some so I continue to notice it – or I copy it onto another garishly coloured sticky note from time to time. I have one more I added yesterday from an Elizabeth Spann Craig post. It says ‘telling detail’ though I think she called it precise nouns.
Yesterday when Ron and I were on an errand in the city he noticed a sign outside a rather seedy run-down motel. It said ‘Colored TV’. My we laughed. If I was describing the motel I would only need that detail to have you see the sort of motel it was.
When we write we want to bring our readers the full deal. That is the magic of writing – we are creating time-travel ships, magic vessels that transcend the laws of nature, ships that the readers get lost in taking them to places they may have been before or don’t even exist but they are seeing it now through our eyes, our tongues, our fingers, noses and nervous systems. Guess it is telepathy too.
Posted by Jan Morrison at 12:00 PM

Oh I can SEE that motel! And it makes me smile, because you've made magic happen with a small detail. Nice reminder to me as I start out my writing day, Jan, thanks!

Jan - I really enjoyed this, and thankyou for posting your uncles letter home...you write so well about writing...I'll be copying your post it for my own computer...thanks for a great article. Your choice of example is brilliant - that colour tv sign says it all!

Oh, this was fabulous, Jan! You hear the rules generally, but you gave them such vivid examples that I think I might actually be able to make something of them (and believe I OUGHT TO) instead of just rolling my eyes and thinking I'm all that and know how to write.

The letter from your uncle is fabulous.

Jan, I enjoy the way you spin your story yarn...it feels like I'm reading it over your shoulder as you write it. How cool is that?

Wonderful post, Jan! I could see Paris (and the seedy motel). I could smell those baguettes! Thanks for the reminder, to always use the senses when writing. We want our readers to BE wherever we have written.

I love that letter! What a great piece of history to have!

A very touching letter, a story on its own. You know what Norm isn't saying.

I think every town has/had a motel like that one at some time. I can describe it inside and out from the two words.

Elizabeth - back at ya! The telling detail came from your precise noun and well it isn't exactly the same - it comes from that place.
Niamh - thank you so much! I'm glad you liked the letter...and the sign!
Tartlette - do you want me to stop calling you that? I wonder that every time I write it but it is meant to be an endearment. Do let me know - names are so personal...
Thanks for your comment and I know just what you mean - not that ole thing again - so your liking it is specially good for me!
Stacy - yay, I like you over my shoulder and I like to be over your shoulder too! And we always have the music on! I'm listening to Corinne Baily Rae right now case you're wondering!
Jen - oh I so want to go to Paris. Don't you? Or perhaps you go all the time and have for years...
Talli - thanks - it is an honour and I am supposed to copy them all for my family! I've started but not finished yet. I have ones from my Dad and his other brothers too.
Mary - you got that right. Oddly, when I went through all the letters his are the only ones that state his belief that he will survive the war.
And that motel rocks! In a seedy weird sad way. Sweet Patootie said it should have a sign saying 'black & white TV' ha ha.

What a lovely blog post! I prefer time travel too, and yes maybe telepathy since I'm using that in my WIP, lol. Thanks for this boost!

No I DON'T want you to stop calling me Tartlette! I have two cousins, and uncle and a former crush who call me Bambi and I like that too--the nickname takes on the association of where it came from and I love Tartlette.

Wonderful post and the letter was amazing. It makes me wonder are letters being written by our soldiers over seas now or do they just e-mail. That letter is a perfect example of going back in time. The motel sign says it all.

Well Tartlette, since we're sharing - a group of my buds that we call The Canadian Babes call me Jannie because one of the member's daughters who I helped raise did. My own children and various folks in my past call me La Banan - my clown name - and my grandkids call me Grannie Jannie Bananie. Yikes. All OK - but if the wrong person calls me a nickname I get kind of cranky...
Mason - yes, it is amazing to hold something in my hand that was written by someone who I'm close to but never met. Weird and wonderful.

I'm not sure what I like most about this post. It's all wonderful. I'm still smiling over 'Colored TV' :)