I would start by introducing Elizabeth, but I expect more of you know HER than me… so maybe I’ll tell a little tale on myself having to do with Elizabeth… When I first decided it was time to blog because… you know… a writer trying to get published is supposed to do that, I tried to find some writing blogs, but a lot of them were really intimidating… people were so professional and knew so much more than I did… but when I ran across Mystery Writing is Murder, that same great informative stuff was FRIENDLY. The comments glowed—she responded to all of them… so I decided to follow Elizabeth around. I followed a bunch of her commenters (and they followed back!) I checked out the blogs in her blog roll (and they were great!) and so, while my style and hers are very different (me being a nudist and all) I started emulating the LOGISTICS of what she was doing… I’ve never been sorry. Elizabeth and I have become good friends and I look to her as a mentor of sorts (even if I’m older)—she actually gave me my push toward Cozy Mystery, which has been an amazing new facet of my writing (and the one that has come most naturally to me).

So when the Burrow talked about a guest for ‘Writing Wednesday’, Elizabeth was a fabulous fit. We gave her short notice, so she let us borrow one of her classic posts, and it is as always, a fabulous scene, followed by the writing lesson, as she so brilliantly displays on a regular basis… 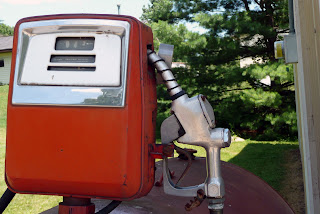 To me, the best time to clean out the car is at the
gas station.

So, one Saturday, I busily pulled handfuls of camp newsletters, empty sandwich baggies, empty sunscreen bottles, a cardboard box, etc., out of my car while it was filling up with gas. (Yes, this was clutter that had collected in the few days since I’d last fueled up.)

There was a man at the pump behind me who apparently watched me as I cleaned. I didn’t pay attention to him at first, but then—after making several trips from the inside of the car to the trash can—I noticed that he was smirking at me.

I realized that I'd pulled a prodigious amount of paper trash from my car. In fact, I’d filled up half the can. I smiled weakly at him. “I…uh…have kids,” I said.

His sarcasm earned him a glare, but I had to admit he had a point. Who else but a parent would be driving a minivan that seats seven people? That has a bumper sticker on the back emblazoned with the name of an elementary school? That has a booster seat in the middle row, easily visible through the open, sliding door?
I’d stated the obvious and he’d called me on it.

When I first started writing fiction, I found it really easy to use unnecessary adverbs—frequently in dialogue. You know: '’he said, knowingly’ and ‘she retorted angrily.’ Then I realized I could just show that the man was a know-it-all by what he was saying: “Actually, the circumference of an ellipse is determined by finding the complete elliptic integral of the second kind.” And I could show that the woman was angry by what she was saying. “Good for you. But do you know where the laundry hamper is? Because the gym socks lying on the floor are the reason we’re arguing.”

If you'd rather show tension via body language, you could have him smirk. Or he could heave a long suffering sigh. She could have tightly pressed lips or bunched shoulders.

Of course, it’s not always better to show instead of tell. Action scenes are perfect for telling. And I’m definitely a fan of a strong adverb, as long as there aren’t so many that I get distracted as a reader.

But when we state the obvious, we’re selling our readers short. They can tell how our characters are feeling by their body language and dialogue. And they get to feel really clever about figuring a situation or a character out for themselves. The last thing I want is to have a reader put down my book with a “Nooooooo. Really?” 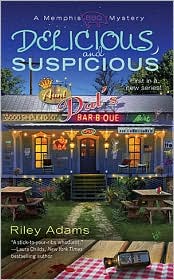 Elizabeth writes the Memphis Barbeque series for Penguin as Riley Adams and the Myrtle Clover series for Midnight Ink (under her own name). As the mother of two, Elizabeth writes on the run as she juggles duties as scout leader, referees play dates, drives carpools, and is dragged along as a hostage/chaperone on field trips.

[Tart note:  if you are not already following Elizabeth, you should be]
Posted by Hart Johnson at 12:00 PM

(Adverbs really are the devil. I do my utmost to avoid them, cautiously and carefully).

What a nice intro, Hart! Thanks so much for the welcome here.

M.J.--I'll admit to being a fan of a good adverb, although the publishing gatekeepers seem to be a lot less tolerant of them than I am! I just sprinkle them in...judiciously. :)

Tami is right. This one is a classic- remember it from more than a year back.
But to be honest, sometimes I do like the obvious to be stated- I am not always in a mood to be over smart.

Rayna--Oh, I hear you! I think I'm coming up on one of those reading streaks right now. I just read a book that really challenged me and now I think I just want my fiction spoon-fed to me!

Hi, Elizabeth! For some reason this is only the first time I've actually gotten to say hello, although I see and RT you on Twitter all the time. So [embarrassingly enthusiastic wave from me]!

Very useful demonstration here for writers of all stripes.

Thanks for keeping it coming,

I stated the obvious in my early writing. I'm glad I got rid of that habit, but it lingers. It sneaks up and I catch it during revisions and edits.

Shakirah--Thanks so much for the RTs! I really appreciate them and having you follow me. :)

Medeia--I'm definitely on the Twitter! :) The nice thing about this problem is that it's easy to fix in revisions.

I definitely have a habit of saying to someone "Nooooo. Really?" I would hate for someone to read my work and give it right back to me.

I think I'll read over what I've written and double check that I haven't been stating the obvious. Great post!

Shaharizan--I think there are definitely some really savvy readers out there who demand a lot. They're the ones that we have to really watch out for!

I love this post, Elizabeth! And my first drafts have a TON of this... I am editing my 3rd thing in a row and just cringe at the first draft...

This is a great post and a wonderful reminder of how we all tend to state the obvious from time to time without realizing it.

Hart--I make sure to overwrite my first drafts with seconds/thirds/tenths so I never have to read them again!

Mason--Thanks so much for coming by!

I am going to STUBBORNLY love adverbs. Forever.