What, you ask have I won? I am the first Burrower who gets to blog after we learned that we have a BRAND NEW BURROWER! And I am SO EXCITED! We haven't had a new Burrower since... 2008? I think that's right. Long time, anyway... We got to a good size and didn't want to grow out of our ability to help each other out, so we sat at that size... but as some lives get busy and people found other interests (or more often, life demanded time), we found we were shrinking again. This person is someone we met when I first started blogging (I found her on Elizabeth's page, I think) and fell in love with her style... she is calm and wise, but still playful and fun. Well, I wasn't the only Burrower to fall in love as we've gotten to know her, so in other conversations along the way there was an "I think we should ask Jan to join the Burrow"-- and she has agreed! So WELCOME JAN! There have been no logistic discussions about whether she wants to join the blog schedule (she manages two, which may very well be plenty, but we hope so). We will keep you informed.

So some of you might know I have rules issues, ne? Heck, I won't even stick to real words (though I do generally prefer proper grammar). I don't like to do what I'm told and only periodically want to do what is good for me. Well, I have a family story that might add just a little insight to this...

You see, if you follow my paternal line... 8 generations back... you arrive at a disgruntled sailor, unhappy to be at his majesty's service on a Navy ship during the War of 1812... He was Welsh. And he mighta been a Roper, or he mighta been an Alcott... there were two rebels aboard his ship, and we don't know which he was... what we KNOW is when they reached the shores of Nova Scotia (funny, that's where Jan is from... seems fitting), this man said "POO!" to Georgie 3, and changed his name to William Hart. 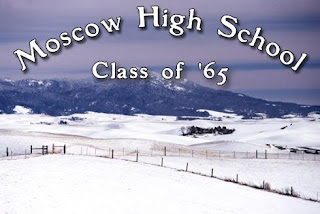 He married, had two sons, and moved with his family across the national border, settling in Caribou, Maine, possibly proving he wasn't right in the head--this is the farthest north US city aside from Alaska. His son who continues my line, as an adult, signed up for the Vermont Sharp Shooters in the Civil War, and moved after that to Wisconsin. Wisconsin was MISERABLE humid (everybody knows that) and HIS SON had a child with lung trouble (probably asthma) and so they moved all the way across the country... San Francisco, Tacoma... and finally decided if they really needed dry air, they'd move inland. Evard Hart was the relative to settle in Moscow, Idaho at the base of Moscow Mountain [photo stolen from website of said class, but I claim it as my right, as my mother was in that class]... the family homestead... I want to say they arrived around 1910.... mighta been a little earlier... my own grandfather was born there in 1913 (and his story is a tear-jerker, but you'll have to wait until I'm in my 60s to hear that story... I plan to write it, but while various participants are still living, it isn't my right). 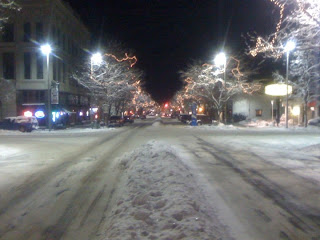 This is where I was born and lived until I was 18. It only had about 14,000 people at the time. The University of Idaho was the biggest employer, but the second largest source of income was farming... strange combo, that... farming university town... This (well--WSU, 6 miles away claims it, but it's all the same) is the area that FOUNDED Hurray Hurray the 8th of May. And you know... I really LIKE the people I grew up with--it is a GREAT bunch... Twisted? Yes, mostly. Lots of gutter minds... It IS home, after all... But interesting and fun. It was a darned good place to grow up. (Look how pretty it is this winter: photo by Arick Branen-a friend from the class behind me in high school)

But I'm glad I didn't stay... see, a hometown has a way of resisting our growth, and I had GROWING to do (and shrinking, but never mind). My mom had a rule when I was looking at colleges... I could go away, but it needed to be a drivable distance (like in a day)... Which meant I could go to any college in Washington, Idaho, Montana, or Oregon, pretty much... (my mom reminded me Sunday I really wanted to go to the University of Colorado, but she worked hard to discourage me--I'd plum forgotten, though I'd remembered my affinity for Boulder--one of those oddnesses, considering I've never been there.) I don't remember if I applied to UW or not. I think I'd crossed it off before applications were due. What I REMEMBER was it was finally narrowed down to Willamette University (a private liberal arts school in Salem) and the University of Oregon... Mom and I set off to see...

Boring pretty brick conservative liberal arts college (can I say that? I mean CONSERVATIVE so far as activity, and LIBERAL so far as curriculum... is that allowed?) versus... 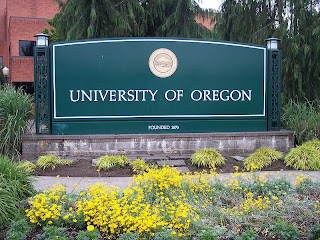 When we drove onto campus, guess what was going on... A STREET FAIR. There was live outdoor music, people dancing in their tie-dyes, food booths... a GRAPH up 13th, on the 'no driving' part of campus of the Reagan budget (education was about 2 feet, defense ran the whole block)... it looked so FUN!!! Easy decision where I belonged!
[picture permission]

Of course to rebel among rebels, I had to join a sorority (far be it for ME to do anything conformist). I LOVED my UO years...

BUT... you are all being assigned to watch the BCS Football Game Monday night where my Oregon Ducks play for the national championship in football! (that would be American football... and college age players... for those of you not clear on how it works)

Email ThisBlogThis!Share to TwitterShare to FacebookShare to Pinterest
Labels: Hart Johnson, Who am I? Friday

What dear things you say! Thank you for inviting me and now giving me such a swell intro!
And I love hearing about your roots - not sure why your first Hart left beautiful Nova Scotia but hey!

Welcome, Jan.
Normally we delete the discussions we have about new members before inviting them, but as Tami says it has been so long that I fogot to do so.
Have let it stay for awhile longer, so when you are spending sleepless nights trying to get that dear kid to come back to Mamma, you can warm yourself knowing what we thing about you!

Moving away from your hometown may be very refreshing, in particular if you grew up in a small town. I did the same. I grew up on the countryside, not even in a small town. Then I moved to go to university, in a big city of 170.000 people (!), which is big on our scale >:D

This was fun and it does explain how you come by your rebelliousness naturally. I have a weird fondness for learning how families end up out west. My people never went beyond the Mississippi.

Jan-I suspect he crossed because Canada had more British sympathies in that conflict and he didn't want to get caught, but that is totally a guess--I do want to do that trek one of these days (Caribou and Nova Scotia)--and we LOVE having you as a Burrower!

Rayna-I looked at that, and then thought... that would just make somebody feel GOOD...

Lisa-it is sort of fun, isn't it? You know my dad's MOM'S family had nearly exactly the same story, only it was South Dakota they fled for bad lungs. I wonder how many people went west to breath better?

Is it okay if I love your Oregon Ducks cross-country & track teams instead?

Su-anything you love about my Ducks is okay with me, and Eugene isn't called Tracktown for nothing!

Yay! Welcome Jan. We are so happy to have you.


Hart, I've lived in NYC for an exorbitant amount of years (not giving away my age), and have only lived in a small town once- Pascagoula, MS (only two years). I love hearing your point of view as mine is somewhat biased. I look forward to hearing more of them so I can make a more informed opinion when conversing about small towns.

I don't follow football really but I will be rooting for the Ducks!

More opportunities to hear from Jan! That's a great thing and I'm so glad she'll be here to visit. :)

Someday, when it's 75 degrees, sunny, clear, and beautiful, with no humidity and snow a distant memory (seriously, we're talking months, possibly years for this to happen) - I'll explain to you how Wisconsin is SO. NOT. MISERABLE.

But not today.
erica