For the benefit of those of you who do not live in the United States, a little background:

This week, the MegaMillions jackpot went through the roof. By the time the drawing happened on Tuesday, it was up around $350 million. It doesn't matter that pounds and euros are worth more than dollars, that's a lot of loot.

Back up a little farther:

Uh, no. At least not in my house. At least not so far. On the evening of the 2nd, I got home from work around 7:45 PM and, finding a parking space on the corner by my house, went to shift into reverse to back into it. Except my gearshift just went slithering on past and decided to refuse to shift into any gear at all, settling into park with a decidedly smug little "clunk". Well, bugger. Mechanics aren't open on Sunday nights. So had to call my roommate (to try and push the car back into the space and out of the intersection - no luck), AAA (to get a tow to the mechanic), best friend to try and borrow her car so I could get to work the next morning (she needed it, but was willing to give me a ride)... ugh. However, we managed to steam up the inside of the car pretty well while doing all this talking and waiting for the tow truck... 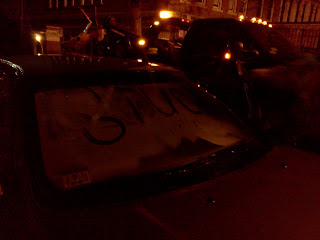 I swear there's a "K" on the end of that, you just can't see it in the photo. Anyway, finally got the car to the mechanic, roommate had followed to get me home again, and we gave the evening up as a bad job and went to the Scottish pub. When we finally got home, we got scared half to death by the premature return of roomie #3 (two days early), but oh well.

Monday, well, I had all the getting-rides-places stuff worked out, but was out all day. Got home to discover that roommate's computer had rung up the curtain and joined the choir invisible, about which she was understandably rather upset. Other roommate dissected it (being all techy-geeky and stuff) and managed to salvage most of the files, but there was definitely a new computer needed. So when she went to pick that up, she parked in what appeared to be a perfectly legal spot... except, oh, you know what, there's supposed to be a "commercial loading zone" sign there but it blew away in the blizzard and they haven't replaced it yet. This being Boston, the car was ticketed and towed within half an hour.

So is it any wonder we went and bought lottery tickets? Really, with all the unexpected expenditures, how can anyone pass up a chance to try and win some money? Now, we're intelligent people here (it may be Nerd Central, but we're not complete idiots) - I frequently quote... errrr... somebody-or-other and say that the lottery is a tax for people who are bad at math, but SOMEBODY has to win the damned thing, so why not us? We amused ourselves with grandiose plans, including paying off student loans and credit cards and parents' mortgages, getting new cars (a flashy one and a little gas-efficient one), buying a castle in Scotland (no, I wasn't the only one who had that on her list), getting a hedgehog (okay, I was the only one with that on her list)...

You know how this ends, right?

Yeah. Out of all our tickets, we managed to match ONE NUMBER. So all those dreams of suddenly having enough money? I can't think of much that's more delusional than that!
Posted by ViolaNut at 12:00 PM

oh, I don't know - you paid to dream I think. That's OK. I wish one of us would win the lottery, but then I never buy the goofy tickets so...
This is the time of year in my house where we don't want to answer the phone. Mature huh?

Ack!!! All the more reason to focus your energy on the thing that might earn you some dollars this year. Yes, you know what I'm talking about...

OH NO!! I was so ready for you to say you WON! And I was preparing my "I only need to borrow a couple thousand" schpeel...

I hope things look up from here on out. Maybe the universe was just getting all the crap out of the way early?

URGH! So sorry about your run of bad luck! I wish you HAD won-as we could finally have our Burrow reunion at your new Scottish Castle... (is it just a UNION if it is the first time?)

I used to by lottery tickets when I was really miserable in my first job. I wanted out SO BAD. But I'm joining Cruella. Polish Emmy.

Mari - Well, you've actually read the thing, so I suppose I have to listen to you. ;-)

Colene - Haha, no, pretty much the only thing I've ever won was a Popples notebook for musical chairs at a 2nd grade birthday party. Sorry to get your hopes up. ;-)

Tami - Oh hell yeah party at the castle! Erm, the one I can't buy. Yeeeeeeeeah, need to rethink that plan, eh? :-P