Topical Tuesday: What will be the fate of NASA? 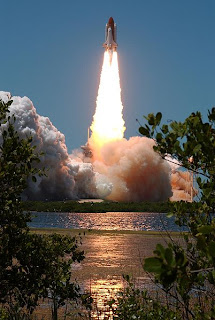 I read a really interesting article in the New York Times today concerning the United States and space exploration.  The fate of NASA (National Aeronautics and Space Administration) hangs in the balance as the agency will need to streamline its budget and do "more" with "less."  Many believe that the government should continue the space missions and programs currently in progress just as we always have; with big budgets and no time frames.  However, there are others who feel that NASA's current state of operations needs revamping of budgets and redirection in it's purpose.

Continuing the space program in its existing form, which is the legacy of the Bush Administration, has several benefits and disadvantages.  With the large appropriation of funds, there is a prodigious amount of resources for the advancement in space technology.  We can actually achieve human space exploration beyond the moon.  The Constellation Project would become a reality; from Earth to Moon to Mars.  Future colonization of interstellar bodies would actually be possible and we would become proficient in creating long distance spacecraft travel.

However, an extension of exploring the solar system brings many problems as this is an extremely, costly model.  This type of budgeting will increase the United States national deficit beyond the trillion dollar mark (zillions, maybe? No, just checked- it's quadrillions).  This, in turn, would cause the slicing of other program budgets like health care benefits and education.  Another possibility is that we will screw up the rest of the solar system just as we mess up everything else.  Sadly, I think our destructive tendencies are programmed into our genes.

On the other hand, the cancellation of many of the missions can be advantageous.  The government would be better able to delegate necessary funds to programs like social security for senior citizens and development of jobs in our degenerate economy.  Also, by cutting back on sending human beings into space (only until NASA can figure out safer and more effective means of travel), there will be a remarkable growth in terms of "robotic sciences and aviation," (Chang).  NASA could allocate funds from the private sector and raise revenue to support their research and development departments.  This could be a way of problem solving the accumulation of capital.

But, the abandonment of this vital program also brings complications. By cutting revenue to the space missions and programs, NASA will be forced to solicit "rides" from other countries with spacecrafts.  This disadvantage would leave the US at the mercy of paying astronomical fares to explore space, much like New York City's MTA.  In addition to this, NASA has stated that it cannot build heavy lift rockets for commercial use due to budget restrictions and limited time-framed schedules (ibid.).  Like all other bureaus in government, NASA will need to re-organize, downsize and prioritize it's spending. My fear is that the US will revert back to the days of Reagan when all of the US space shuttles were nothing more than glorified taxi services for high-powered companies. 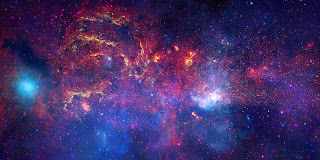 It's interesting that this same concept is in Stephen Baxter's Manifold Space.  Baxter discusses the existence of life other that originated on Earth.  He discusses the possibility that the United States, and in turn other countries, lose site of our innate compulsion to expand and explore.  Perhaps I'm nuts, but I really feel that space travel is that next insurmountable plateau.  We can better find resources to sustain ourselves if and when we expand.  I'm afraid that Easter Island, the eradication of natural resources and the disappearance of an entire people, will happen on a global scale should the world population continue to increase (we all know it will).  The only answer that I can come up with is will be to spread to the stars, like Octavia Butler's Earth Seed.

What are your thoughts or point of view on this?  I want to know!

According to Star Trek, we're only about 50ish years away from First Contact, so NASA really needs to get on it.

Unfortunately, there are about a dozen places to spend every dollar, so no programme can really get the funding it needs, and it's easy to see why policymakers (and the general public) choose health care and education over space exploration-- we like tangible things. And people who already live here tend to get priority over poking around in space.

I happen to think ALL this would be more cost effective if all the space exploring powers would poor resources and just COOPERATE for a change. I think NASA as A base for this is fabulous but I don't think there is nearly enough cross pollination because everybody has national ego involved.

Then again, I also think we (the world) needs to stop breeding beyong replacement and needs to reverse our destructive ways. I don't think we should GET to destroy some other world until we learn to take care of the one we have. *cough* okay. I'll get off my uber-liberal tree-hugger soap box now.

erm... that should be POOL resources.

I guess co-operation is the way to go to get the most out of the money. There's already a co-operation between NASA, the Russians and ESA (European) on the ISS, and NASA is utilizing the rocket launch facilities on Baikonur (probably i spelled it wrong) in Kazakstan.

Show stoppers for joint space efforts may be technology development, and high-tech spin offs, in particular for military applications

I've been so bad I should send myself to Tami's dungeon and get a spanking. I may like that though!

@Sue- I know, this economy is really horrible at the moment. I'm hoping things will pick up in the next couple of years.

@Hart- that would be an excellent solution. However, it would take 50 years just to get all those interested to actually sit at a table and discuss anything. One day . . .

@ CAS- You know, I was just thinking about that whole "military" perspective concerning space. It seems that most governments, especially world powers, do not see any merit in science just for science's sake. There always must be an angle, particulary, weapons and defense, when any advancement is concerned. Drives me nuts!