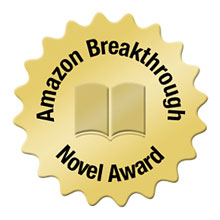 So for those of you living under rocks or avoiding writerly crowds, you may not know, but for most people in the writing world, you have probably heard of the Amazon Breakthrough Novel Award Contest. BUT, unless you've been poked and prodded by the likes of me, or decided all on your own to investigate, you may not know what's the what (my new phrase adopted shamelessly stolen from Jan).

So I thought I'd go through this a little because IT'S COMING FAST!!!

(if there are mistakes below, it is probably par for the course—sorting this stuff requires legalese, at which my skills are shoddy)

The PRIZE is a $15,000 advance and a Penguin book contract (erm, which you can't back out of, and they get first rights to negotiate with the other finalists too). The CONTRACT looks pretty darned standard, and the publicity will surely help sell through the book, so $15,000 may or may not sound big or small or whatever to you, but the Amazon winner will make more than that in the long run.


January 24 – February 6: Submission period (that, as mentioned, may end early)

February 24: Pitch winners announced (judged by Amazon editors) and sent to second round: The first phase is a narrowing based ONLY on pitch and (up to) 2000 (1000 each) entries go to next stage.

March 22: Quarterfinals (based on excerpt) 500 (250 each) go on (judged by Amazon editors and expert reviewers). ALL of these winners get a Publishers Weekly REVIEW of their ms.
Note: at this point excerpt and reviews go up online so Amazon readers can see and rate

April 26: Semifinals 100 (50 of each) These are CHOSEN by ranking the Publishers Weekly reviews. These will all be read by Penguin editors.

May 24: finalists (6, 3 of each) chosen by Penguin editors reading full ms.

June 13: (all finalists get to go to NYC—whoop whoop!) winners announced (chosen by PUBLIC voting and a celebrity review panel will give a review of all (meaning famous authors, agents, editors)


I suppose that has some what in it, too, eh? Still missing, though:

I got knocked out RIGHT AWAY last year. And in retrospect, it is pretty clear WHY. My book was complicated and it was very difficult to write a PITCH that did it justice. I just couldn't quite get across the interesting stuff. AND I didn't know some stuff.


(some stuff? You're kidding, right? The stuff you don't know could fill VOLUMES)

Yeah yeah... but the CRITICAL stuff I didn't know was to ASK FOR HELP.

There is a discussion board and helpful people giving each other feedback, which is FABULOUS. The PITCH HELP alone would be worth it, but I managed to make several friends... SADLY, I didn't make them until I'd pushed 'send' so they were made over that anticipation of winners and a lot of silliness (the best kind, eh?) but NOT in time to help my sorry pitch.

THIS year, I have several veterans I've asked for HELP and my pitch is getting ready for its 3rd cleaning, but I am GETTING it. Plus... my novel this time is sexy. It just is. I don't know if it will pass the 'high concept bar' but it is a lot closer than any other one I've written. I even have a sexy title! Kahlotus Disposal Site. What? How is a dump not sexy?

For me, the people I met are are the biggest benefit—they are different from the blogging group, but no less serious as writers, and honestly, I think the things I get from those interactions are a little different and complimentary compared to the things I get from my blogging interactions. (NaNoWriMo has overlap with both, but probably more with the ABNA folks—it seems nearly ALL of them like the 'write fast' thing a couple times a year)

AND the punch of a deadline. I have high hopes to really get some of my books OUT this year, but having this end of January HUGE crunch helps enormously with how much I will be able to do (I also plan to do NaNoEdMo in April). The adrenaline rush, the co-conspirators who ALSO have the deadline—it all feeds in to what motivates me, and in the end, THAT is what it's all about.
Posted by Hart Johnson at 12:00 PM

This sounds amazingly awesome. Too bad my re-write isn't done.

Still, best of luck to any who enter!

Thank you, Matthew! I like to actually USE it to make me get the re-write done... because mine isn't either... but I am making progress...

Maybe I submit next year. This year it will be too early >:)

I'm entering, but that pitch. At least I'll have a complete novel and two agents who have expressed interest.

Sounds lke a wonderful opportunity. I wish I had a finished book to submit. I look forward to next year.

CaH-Actually, Now is a GREAT time to start planning for next year... if you plan to finish your novel in the first half of the year, then revise in the second, then spend January on the pitch--it is GREAT timing.

historywriter--yeah the pitch is a BEAST. i am so bad at it. Congrats on two interested agents!

Chary, you will--remember, steal your time where you can--a page a day would do it!

Best of wishes to you!!!!! Lots of competition though... that's the bad thing with something like this but you know we are rooting for you!!

Thank you, Danette! It SEEMS like a lot of competition, but I think the odds aren't that different from getting an agent (as depressing as that is)