A Lesson in Strained Metaphor (that will hopefully motivate) 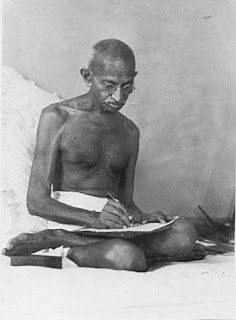 I don't know HOW often I've read about what a solitary activity writing is. And I know in my OWN early writing.... years and years of journaling, poetry, my first attempt at a horror novel... I shared very little. Oh sure, I shared SOME stuff with a couple of (read: Melinda) friends. And I wrote a lot of letters. Mostly though, I wrote into a void.

And that was okay.

You know what doesn't work very well though? The marathon of a novel production... Alone. Would YOU run 26.2 miles if nobody was watching? Would you even TRAIN adequately without some encouragement and advice?  How fun would it BE if you ran it alone?

I suppose some o' you nuts are all self-motivated enough—disciplined enough... to keep going through the long trudge alone (though honestly, if you are HERE, in the blogosphere, I am doubting it—the true loners are out there... you know... alone...)

We (if you're like me anyway, and since I've been working hard to create mini-mes, I hope you are) eventually reach a point where we venture OUT a little... either we accept that sharing and getting feedback is the only true way to improve our writing, or maybe we just crave a little accountability for keeping our schedule, or encouragement to keep going, or maybe we just begin to crave some company that THINKS like us.

It's sort of a revelation really, that we aren't insane... that other people think sort of like us. And if you find the right place, the ENCOURAGEMENT WORKS! (sometimes the accountability even works). And if we're LUCKY the peer process for improving our work WORKS.

So I thought maybe we'd explore how to best UTILIZE this fabulous system. 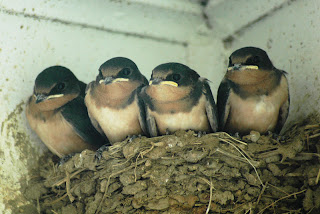 So I thought maybe we'd be birds... eating the fruits of the knowledge trees... then spreading that knowledge back around after it's been thoroughly digested... *cough*

Erm... And the Fish metaphor doesn't work because the littlest fishies are trying en masse to learn from progressively larger fish so the direction is all wrong.

And Finally One that Fits... (if you lay down and squeeze into it)

Okay, so... you're a freshman in high school... And there are the WAY COOL LEGENDS who are graduated already, but have made the trophy case, or at least the rumor mill... so everybody still talks about them... admires them... and the Seniors who are NEARLY done... then peers closer and closer to your level... and there are the kids still in Middle School, or even elementary... at each step you learn and grow—you admire those above you... and you almost don't notice yourself RISING because you do it in a cohort of people LIKE YOU. But all the way through, you can look up and down, and either ENGAGE or live in a vacuum.

So Y'all KNOW you need MY advice, right? (Okay, maybe not, but if you're still reading, you asked for it)

HA! Gag's on you! It was in the title! But here are some specifics. 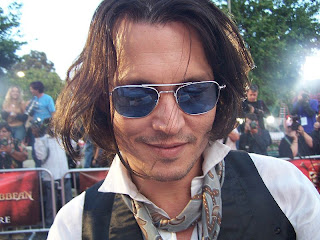 There are some people out there you can just LEARN FROM. Love them like you do Johnny Depp—from afar, knowing they love you madly back, but probably don't have time to drop by in person.


Doing What the Teachers Say

All those agents and editors telling you what to do? Just do it. There is NO POINT ARGUING, unless you have formed a relationship whereby they GET your vision and are willing to encourage and work with you... Otherwise... just do what they say or you just won't pass.


Sucking Up to the Seniors

And I don't mean the AGED here... I mean the people you admire who you CAN TALK TO. Do! Tell them what they're doing that inspires you. Ask them questions, if they are approachable. Published authors aren't ALL beyond the walls of Mordor, some of them are just seasoned warriors in the very same battles we're in, and might be willing to give some advice, encouragement-- might even be one willing to take you under their arm.

Rub elbows. Try to get invited to their parties. Follow one around it they don't act too annoyed—especially if you can get one to TEACH you something. In return, offer to help as you can—be willing to listen and give sympathy and advice, knowing you should qualify it if you don't know, but even at different levels, some people have different strengths than others... you help me with English and History, I can help you with Math and Spanish—classes I am ahead in. 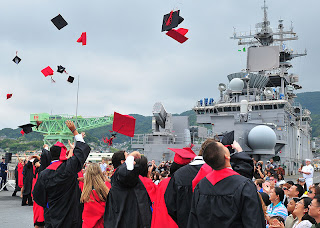 HELP EACH OTHER! Trade papers! Peer review! Split the research for projects where you can. Point out the helpful resources! After all, how good will the graduation party be if half your good friends are being left behind?

How cool did you think the high school kids were that came back to volunteer when you were in middle school—as coaches assistants, events organizers, or teacher helpers? The VERY coolest, yes? Well don't YOU wanna be cool? I mean this at every level... climbing, you are admiring, asking questions, trying to learn... but look back... share what you learn, help in turn.


Caveats: Never ever, should you ask ask ask, without giving back. People all have a lot to do. I read a blog Wednesday by Medeia Sharif who, in a job she had, had a lot of people asking too much, but not giving back... people who were NEEDY but not gracious. If somebody HELPS YOU, help back... Beta reads take TIME, so should typically be done ON TRADE (this is one reason being part of a GROUP is ideal... there are always SEVERAL available, and somebody you can read FOR).  Split up your reads--if you need several rounds of reading, allocate your peers, a couple to each level, so no one has to read it 14 times--sure you want them ALL to see the final copy, but if the same person is stuck on all the drafts, it will get as familiar to them as YOU, so they will MISS the big stuff anyway, and the REAL problem, is if they are reading YOU that much, you CERTAINLY ought to be reading THEM that much (says the person asking 8 people to help with the Cozy she's writing)... I AM willing to work on trade though-- with ALL of them.

So there we have it... a metaphor that works better than a bird pooping...

We'd love to hear how it's worked for you... helpful people ahead, people you've helped behind... any challenges I don't at least allude to?

Yes! You've hit the nail on the head and I even understood all your metaphors. :)

I have a writing couple that has worked for many different publishers and write for Berkley now--Joyce and Jim Lavene, a husband and wife team. They also live nearby me and have been incredibly encouraging...besides offering great industry advice and friendship. They've been wonderful mentors.

Passing it on is the best way to repay a kindness, I think. Plus, the industry can really sap you dry some days--it's so nice to interact (give and take) with the writing community to get recharged.

Yup, sharing is definitely good, and the sharing that is of the give and take kind, not just the take.

And it is definitely encouraging to be in contact with other authors too, whether they are struggling to get published or are already published.

I actually like the solitude, the freedom in it. I like it for me and my unedited text to be left alone.

Sometimes, though, I feel a great urge to call up another writer and say "Hey, let's go somewhere?"; and then we would climb a mountain, or sit in the shade, talk about writing, and watch people for a while. That would be good.

I know I wouldn't have finished my novel if it weren't for my regular writing group (which got pared down to a writing partner about two months before completion of the manuscript). You've gotta have somebody out there who can give you feedback, even if it's just a pat on the back and a "don't give up!".

Oh, and my word verification word for this comment is "moony"! Now I'm feeling all Lupin-esque... :D

Top post, whichever one of the Burrowers wrote this (you really should put your names at the top). I'm guessing HART what with THE CAPS and INSANE ENERGY.

Elizabeth--I think you are STELLAR at both directions of this spreading the love--I know you've helped me a ton!

Tara-bo-Bara-Exactly! Encourage those below, praise and mimic those above.

Sera-I like the solitude for the WRITING, but I don't think the publishing piece of it is NEARLY so pleasant solo. I never would have finished my first without the external encouragement (and accountability) and I KNOW I would have gotten discouraged with the querying, rather that plugging away...

B. Down to 1?! Ack! Still--totally hear you on needing the group!

Mark--at least I only yell a WORD now and then, eh? But that insane thing... yeah, guilty...

Thanks for the linkage.

These are all great metaphors, even the ones you labeled "bad." This is an awesome post, especially for newbie writers who have so many questions. I wish I had access to this info when I was starting out.

The bird metephor had me laughing. I can usually tell when it's you writing. You just have a style I recognize.

Medeia--thank you! And thanks for coming by! It's great to have some feedback farther along, career-wise--wish you'd had it too! (I don't think I could have done without!)

Marjorie--so the spaz pretty much shows through, eh? *snort*

The energy of other writers is something I just cannot do without. If I was writing in a vaccume, I don't think I would be writing at all.
May not share everything I write and in the form in which I write it, but I need people to sound off all the time.