Forget the sword... it's pen vs. keyboard

It's a fairly safe bet at this point that most people hanging around this blog, both the readers and the contributors, are writers. Or... are we typers? Ah, there's the rub...

to protect the guilty, but I'm not the only one in this crowd who goes longhand regularly - in fact, someone 'round here once said that a particular story not only had to be hand-written, it had to be written in red ink. Fair enough. Now, when I sit down to have a crack at my latest WiP, these days it's almost always the scritch of a pencil, not the clickety-clack of keys, that becomes my soundtrack. But does one's mode of writing influence what actually gets written?

I'll start off by saying that I'm a bit of an anomaly (no, really?!) in that I'm almost totally ambidextrous. For most tasks, they'll get done with whichever hand happens to be closest, whether it's eating, brushing my teeth, or writing. However, certain kinds of writing I do tend to favour one hand over the other - my "official" signatures, for instance, I keep to my right hand so at least there's some chance they'll match up. When it comes to how it works for lengthy writing, however, I usually write my first draft right-handed, and then swap the pencil to my left hand to do my editing. Perhaps this activates different regions of my brain, though if it does, they're backwards to how such activities are usually perceived (i.e. the right brain is creative {=left hand} and the left brain is analytical {=right hand}). (Digression: My junior year of college, I was called in to explain why my music history final was in two different handwritings. Well, duh... because I have two hands, of course, and since I'd filled a blue book and a half, the one I'd started with got tired and I switched to the other one. Very convenient skill, really... It also came in handy in Latin class in high school, when I took class notes with one hand while composing music with the other. Did a whole string octet that way when I was 15...)

There are times, however, when the old-fashioned way just won't cut it. I'm speaking, of course, of those mad marathons known as WriMos, when you are in a headlong race against the clock (or calendar, really) and your own creativity to spew out 50,000 words in 30 days. Unless you're

a maddeningly slow typist, typing is simply so much faster than hand-writing that it's practically a must, at least if you're doing anything other than writing that entire month. I've had two successful WriMos and one dismal failure - no prizes for guessing which were typed and which was written out longhand. The thing is though, the slower pace of the handwritten manuscript (which is totally redundant, if I'm going to get all etymological about it) means that I have more time to think about each sentence, to plan ahead a bit for better word choice, to repeat it in my head several times as I scrawl across the page, tweak a bit here, there, cross out, overwrite... In fact, many times I have rather a lot of detail worked out before ever setting graphite to paper, making it akin to a second or even third draft even though it's the first time I've written it down.

Of the four novels I've started, two are "finished" (as in, the story's all there, they just need editing), one is abandoned, possibly forever, and one is a WiP. The finished ones, well, they're the products of those WriMos, and it's not surprising to me that they're for younger readers and have similar plots. Are there some good bits in there? Yes. Is there some absolute tripe? Oh hell yes. As for the WiP, which has been stubbornly handwritten from the start (stubborn on its part, not mine - it refuses to be corralled if I type), there are still some stinkers but, I'll venture to say, no actual total rubbish. The extra time taken over the physical act of writing seems to knock the really awful stuff out before it ever makes it to the page.

And then there's the editing process... Oh good grief, I hate it. But I almost can't do it at all if I only have pixels on a screen to work with. Whenever one of my fellow Burrowers fires off a novel draft, I trot straight down to the local Staples, flash drive in hand, to print it out (whether it's 200 or 800 pages {*cough*Tami*cough*}), so I can scribble away on it, cross things out, draw arrows, highlight, make notes, draw faces... Maybe it's because writing papers on a computer didn't become the norm for me until I was already in high school, maybe it's just something about that physical connection to the page, but for anything longer than, errrm... well, this blog post, basically, I need a pen and some paper to make headway (make that a pen in each hand - it's faster). But there's also the finality of the typeface - if it's sitting there all neat and tidy and legible, it's much harder for me to even find the things that need fixing, while when it's scribbled down in a notebook with all sorts of notes-to-self in the margins, the mutability, no wait, pliability, of the text is much simpler to mess about with and tidy up and just generally improve.

Don't get me wrong, there are some things that I love the computer for - cut and paste is one of the best inventions ever, if you ask me - and as noted above, when you're churning out massive quantities of verbiage on a deadline, give me QWERTY every time. In fact, just the act of typing up something that I've first 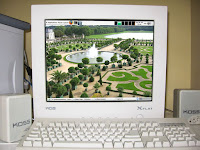 written by hand is a useful extra editing round, where I can make minor changes on the fly as the story flows from page to screen. But I wonder, sometimes, if we're losing something vital with each technological leap forward. When you read Austen or Dickens or Shakespeare, knowing that each word was scratched out, pen in hand - I don't know, it seems to set a greater stamp of personality on the text, somehow, than the generic pounding of keys. Is it because each of us has a unique handwriting (or two *cough*), while, fonts notwithstanding, a typeface is set and unalterable? I can tell, even years later, how the writing was going at a particular point just by looking at my handwriting - if it's messy and big and words are all connected up that shouldn't be, I was flying along, while neater bits with more space and reasonable margins indicate a slower, more methodical pace. If I typed it - well, who knows? What about music? I can arrange directly to the screen and merrily sling notes about, pointing and clicking and printing when I'm done, but if I'm actually composing (which, truth be told, I'm not all that good at), forget it. Pencil and staff paper, every time.

So, am I a complete oddball? Step up, everyone, and let's have a good ol' debate in the comments - are you a devotee of the pen or the keyboard, or a combination? And why?

But I am totally with you. I am more than a decade older than you, so computers didn't become the 'norm' until around the time I was finishing college--having a 'personal computer' was rare until the early 90s. So my computer initiation was with professional documents--excel spreadsheets, business letters, and then grad school and statistics. My COMPUTER brain is analytical and dry. There are TIMES that works, but there are certain scenes I nearly always want to include in a book that need to tap emotion and relationships better, and that is a hand job *cough*

As for editing... I ALWAYS start and end with hard copies. Middle editing--rewording and such, I like the computer for, but the PLOT read for the big stuff, and the final polish have to be by hand.

My professional writing, I can only do on the computer, but for everything else, it is long-hand.

Now, that comes with an explanation (isn't everything of mine rather long winded?)- the only really uninterrupted time I get to write is during my daily commute- unless I start writing a SMS novel, I necessarily have to write on paper when I am writing on the train. But often, even when I cannot put words on paper, I am 'writing' in my mind. I write the sentences in my mind, rearrange the words, scratch some out, put in a couple others.... and all of that is done visually in longhand (ticks, scratches, arrows to change locations, astrixes, etc). When I get home, I may transcribe it directly onto a computer, but actually, I am only writing down what is done in long hand in the brain.

Does that make sense?


How do I edit? Frankly, I do not know, because I haven't edited yet.

I write all my notes and ideas down long hand, and that includes most dialog but I'm just faster at typing so when Nanowrimo comes...I have a mad affair with my laptop.

Tami - Eh, I rounded up. ;-) I hadn't thought about computers originally being used mainly for business purposes though... yes, that would definitely be a different mindset than fiction!

Natasha - yeah, that's pretty much what I was getting at. It's said that Mozart would write down a totally clean draft of a new piece, having worked it out completely in his head first. I do that with poems, usually, but not longer stuff...

Jennee - mad affair, indeed! I've definitely learned my lesson about trying to handwrite during WriMos, that's for sure!

I never write anything long hand. Well, except poetry which I haven't written in ages and ages.

I was SO mad at my parents for insisting I take typing in high school - yes I'm old :) I've thanked them multiple times since! I type pretty well - at least 70 words a minute, so long hand is kind of like torture :)

Jemi - we had to learn to type in junior high, but that was okay 'cause we got to shoot little aliens every time we hit the right letter. ;-) Poetry, yes, definitely longhand - I have no idea why erasing feels better than deleting, but it does.

I would *rather* write longhand, but time restraints mean I have to type...otherwise it takes twice as long to transcribe my scribblings onto Word.

I think I'm a dabbler rather than a Writer, and most of my writing is for work, but I've noticed that when I'm having thoughts that are demanding to be written I take off my glasses so I can't read and use unlined A5 paper. (I'm right handed and use my left hand as a guide for the next line of writing - I also use different coloured pens to chunk ideas together) Somehow I think better that way, I don't get caught up in judging or correcting, and can just let it flow, but as soon as I can see/read what I've written I become more critical.

Like Jemi I took typing in high school and type fast and accurately, but handwriting 'seems' better at the thinking stage.

A looong time ago, I needed to sit down with pen and paper whenever I was THINKING. And then, afterwards, I typed the whole damn shit with all the details into the computer. Now it's different. I can easily do the THINKING in front of the computer, and the only thing I write with an old-fashioned pen are Christmas cards and shopping lists.