It was the Summer of 2005. The Summer before the release of the Half Blood Prince. Harry Potter ruled our lives, and when we couldn’t convince each other of the merits of our own pet theories, we turned to fan-fiction to prove a point. We rewrote history, created stories for characters barely meriting a mention in the books, we decided the flow of the next two books, and of the sequels beyond the series. And we commented, Alot*.
None of us thought of ourselves as writers, but we must have been averaging between 2,500 to 5,000 words of fan-fiction every week. Without realizing it, all of us were getting increasingly better at the whole writing business, but fan-fiction was still the be-all and end-all of our writing universe. Then one day, Countess Vera Rassakoff breezed into the group- if you can call a ten knot gale a breeze!
Anyone could see that she had decided to make JasonD her protege, but she had her own way of going about it. She voiced the audacious idea of staring a café for readers, writers and similar life-forms. She hinted at it, we ignored her. She spoke softly about it, we pretended not to hear. She shouted it out, we ridiculed it outright. But not for nothing does the blood of her Romanov ancestors flow in the veins and arteries of the Countess. Without telling a soul, she scouted out a likely location at Hogsmeade, filled it with leather armchairs, comfy bean bags and lots of bookshelves, and sent out Dasvidania, her owl, with embossed cards announcing the opening of Café Steinbeck. 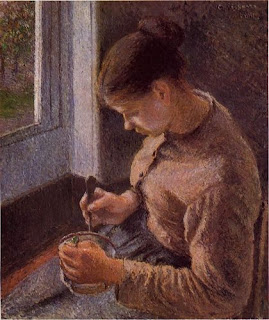 Never ones to resist a good party, we flocked to the Café, and over steaming mugs of espresso coffee started sharing stories. Within weeks, the clientele had grown so much, the Countess was forced to hire yours truly as her barista and chief waitress, so she could concentrate on baking sachertorte and writing stories.
On a gloomy afternoon, when there was nobody else around, a patron brought around a copy of a Renoir, to bring some cheer into the place. That opened a floodgate- within weeks, the walls were groaning with masterpieces – John Piper, Modigliani, Marc Chagall, Toulouse-Lautrec, Rembrandt, Pissarro… Who knew so many painters existed. Who suspected how many stories were hidden behind each of the paintings.
We started writing stories to paintings, and surprised even ourselves with the diversity of the material we produced. We wrote stories about our favourite recipes. We wrote stories to cope with calamities. We wrote erotic fan-fiction. We re-wrote fairy tales. We wrote memoirs. We wrote epic fantasy. We wrote, and we wrote, and we wrote. Till we started believing we were writers.
Then the inevitable happened. We started moving on. We had babies, we moved to new cities. We got new jobs, we had to deal with illnesses. None got married, but several got their hearts broken. One wanted to concentrate on her doctorate in mathematics, another disappeared to set up the Super Collider at CERN. We stopped frequenting the Café, its takings dropped. After fighting a valiant battle to keep it going, the Countess finally had to let the Café go when the lease expired.
But the spirit of Café Steinbeck still lingers in every one of the people who were privileged to be its patrons. We are people who never stopped calling ourselves writers even when we went for months without writing a word. We are people who can see a library of yet-to-be-written books, where others see only empty shelves.
Delusional?
Maybe!
But what is life without delusion?
_____
* - you are going to be hearing alot about Alot in this blog. Etymology and known history found here - Hyperbole and a Half.
Painting - Young Peasant Woman taking her Coffee (1881), Camille Pissarro (copyright expired)
[This 'Delusional Thursday' post brought to you by Rayna M. Iyer, who likes to believe she is the least delusional of the bunch. That it also makes her immensely boring is something she chooses to ignore.]
Posted by Natasha at 12:00 PM

I love that you found inspiration to write from so many different things--from art to food! What a talented group!

Oh thank you, Elizabeth.
The difference was that we were many of us. You are one of you, and you write about food and to art, and throw in mysteries to boot!

it was FABULOUS! There were some gems in there... and definitely my first experience immersing myself in writerly company.

Oh, not delusional but very inspiring.

I suspect that this story will be on the dedication page and or Author bio page for each of the books you all eventually sell. *isn't delusional at all*

Delusion is necessary, indeed, but sachertorte I'm not sure about. In fact, I'm not even sure what they are. ::runs off to Google::

@ Hart- at the risk of sounding conceited, there was a great bunch of people there, wasn't it?

@ Markor- I would not be surprised. This or something similar

@ Mark- crawl out of whichever rock you have been hiding under, and get thee yourself a sachertorte- a picture here to pique your appetite- http://coffeeringseverywhere.blogspot.com/2010/02/honeymoon-in-salzburg.html

I love hearing how people came to realize they wanted to write - or were already writers in disguise! Love it :)

Such lovely memories... we did have a grand old time, eh? ;-) And EVERYONE should have sachertorte... yummmmmmm...

They are great memories. I was not there when the Cafe first began but I was one of its last patrons.

*grabs an expresso and dreams of Tina's sachetorte*

what a wonderful story! It has all the important elements - food, comfy chairs, good coffee, fabulous art. Oh, wait a minute - no naked or near-naked men? I guess the tartlett wasn't there, eh?

@ Jemi - all my life, I have heard people say I could write well (yes, I actually said it), but it needed something to get me writing.

@ Leanne - what is life without sachertorte...

@ Chary- you were one of the more valued patrons there. When it started, there were less than half a dozen of us (a couple of whom had no intentions of writing), but the numbers grew, and they were all great.

@ Jan- what makes you think there weren't any? Art on the walls and no nakedness- impossible. Just because this Prude doesn't mention it doesn't mean it wasn't there.

Jan--I was there! I was just finding my writing legs, and intimidated because these guys all seemed more confident, though I know now that is all perception--but a few WERE intimidating, if your MO is running around encouraging nudity... I did a fair amount of that though--I did a fantasy parody that included the Mammory Mountains and a Castle where they make exotic underwear...

Very thought-provoking post. I like how certain things happen in our lives and that we go through some things together even though we don't think we would. It's good to look back like that... I've been doing a lot of thinking lately about my past. It scares me to think what I've left behind.

@ Clarissa - There is a lot we have all left behind, but there is only so much we can carry, so sometimes it is necessary to leave something behind so we can pick something else up. And Destiny is something I firmly believe in- when something is meant to happen, it does.