When the train slowed down outside a station the other day, I couldn’t help but admire the beautiful date palm growing beside the tracks. The plant is a very expensive one, and I wondered why the Railway Authorities had chosen it over cheaper, indigenous species. Definitely a horticulturalist with a taste for the exotic, I concluded, and I marveled at the fact that in a country where manhole covers are stolen to be sold as scrap, the plant remained unpilfered. 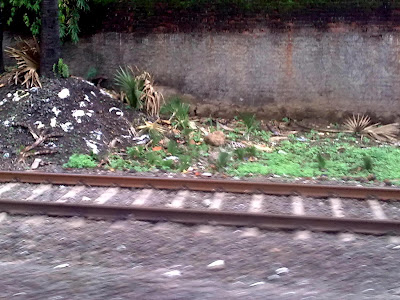 The train moved forward a few feet, then stopped again. There were dozens of date-palms of various shapes and sizes beside the tracks. I mentally did the maths - there was a veritable fortune in plants out there - no horticultural department, however rich, could have sanctioned such a high budget for beautifying the area near the train tracks. The appearance and the arrangement of the plants did not make sense either - why would anyone plant them in such a haphazard pattern? And would anyone in possession of their senses even think of planting a plant on what appeared to be a heap of ash? There had to be a simple explanation.
The lady standing beside me finished the banana she had been munching, and threw the peel so it landed close to one of the date-palms. The answer came to me in a flash - the trees were not procured from a nursery and lovingly transplanted beside the tracks. They had germinated from the seeds that a commuter spat out from a train window! 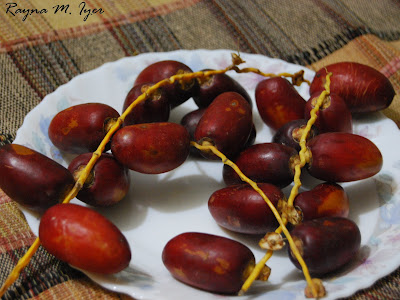 I was reminded of a conversation I had with a friend a couple of days back. She had been mourning about how she desperately wanted a date-palm to complete the décor of her living room, but was just not able to get them to survive in her house. She had bought healthy-looking date-palms from some of the most expensive nurseries in the city, nourished them all with the choicest organic fertilizers, with identical results – an untimely demise. Nothing she did was adequate to keep the plants alive.
And just a few miles from her apartment, the same plants that she lusted after sprung up in the most inhospitable terrain from seeds unceremoniously discarded after the consumption of the fruit.
The irony wasn’t lost on me.
Isn’t the story similar when you are writing? There are days when you have blocked a couple of hours off for writing, and you end up frittering it away on multiple games of Bejeweled Blitz because you just cannot bring yourself to write a single word. And there are those days when the words just flow from your brain and transcribe themselves on paper, even if the only paper available is the back of a train ticket.
In writing as with date-palms, most things happen because, some things happen despite, and some others do not happen even after.
_____
[Anything can distract her from the important business of getting on with life. No wonder, therefore, everyday is a Random Wednesday for Rayna M. Iyer.]
Posted by Natasha at 12:00 PM

I love this! Yes and yes...we fling food and old faded flowers from our deck to the weed patch below - I have flowers growing that I didn't plant! The chickens eat the food - they think it is mana from heaven and so it is...

Of course, there's also that coffee that they make by feeding the beans to ferrets or something and letting their digestive systems work off the bitter outside before finishing the beans... :-P And my best friend had "bird poop tomatoes" a few years ago, which grew up to be perfectly tasty. :-)

Food for thought, no pun intended. But, those dates do look delicious. We have many of those here in Mexico and it makes me wonder how they got there too!

I love volunteers--and I love that the plants grow where people throw their trash. (in fact honestly, it is probably exactly that compost that makes them thrive)

Wonder if this is a good argument to ready trashy books to inspire our exotic and fabulous writings... I sort of like that idea!

A great reminder that much of the most beautiful growth springs from ash and not fertile soil.
B

@ Jan- the kids and I do it all the time too. It is fun chucking things into the soil, and guessing the plant when they do come up.

@ Leanne- I have heard of that, but thank you very much, I can do without coffee that has been inside something else.

@ Clarissa - are you sure you didn't plant them.

@ Barbara- when the time is right, I guess you just can't keep what was intended down.

I love how you see the world and make all of these intricate connections.