“I don’t need books”, someone told me the other day. “Whatever I want I get either from the internet or TV.”
We had been talking about black holes, and he was rather kicked about the fact that a 30 minute programme on TV had given him as much information on the subject as many years of slightly scattered reading had given me. Had I been sensible, I would have backed off right then- it was pointless even attempting to debate the point with someone who genuinely believed books were redundant. But when was the last time anyone accused me of being sensible?
“I agree it is much more convenient to get information from the internet, and some concepts are better explained through a visual medium”, I conceded. “But there are things which only books can give you.”
“Like what?”, he challenged. 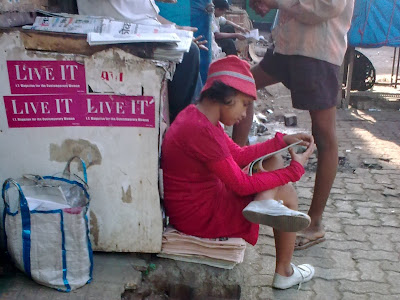 “Books let you linger over some pages, and skip through others. With books you can go back and check something you read earlier. You can read books at the pace you choose, and stop whenever you want to stop.” I knew I was starting to sound almost evangelist, but I couldn’t help it.
“I can do all of that on the Internet”, he informed me. “Besides, a TV programme gets over in an hour, you don’t have to spend days slogging over a book.”
“Forget non-fiction”, I said, realising no response of mine could even start making an impression on a person who thought reading was slogging over. “What about the pleasure of reading a story? I like movies as much as the next person, but there is quite a different charm in reading books.”
“What charm?”, he countered. “Movies are so much better than books. You can see everything in front of you, instead of trying to guess like you have do with books.”
“But isn’t that the whole point of books?”, I asked. “You take what the writer has written, and use that to create something of your own. You fill in the details yourself, so the details become your own, not that of the writer’s.” His glazed eyes told their own story, so I tapered off. “But maybe you are right. Good books make you work, and most people would rather not.”
“Exactly”, he said triumphantly. “After a long day at work, I want to relax in front of the TV. I don’t want to do more work by reading book.”

Though he went around with an infuriating ‘I won the argument’ look for a few days, I actually felt sorry for him. Lost to him was the wonderful universe of books and reading. For him ‘Gone with the Wind’ is a simple love story set in the years of the Civil War. Would he ever appreciate the fine irony of Scarlett finally getting Ashley when she no longer wanted him? For him, the highpoint of ‘Harry Potter and the Goblet of Fire’ is the redundant dragon chasing scene. He would not even be aware of the dynamics between Harry and his best pal. 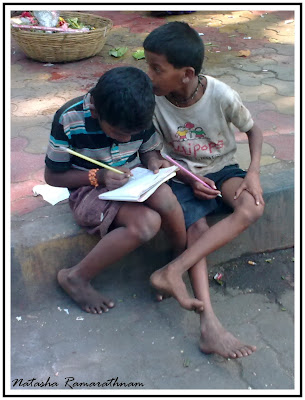 Books, by their very nature force you to think. I must have been fourteen when I read ‘To Kill a Mockingbird’, but that one line by Scout Finch- “I think there's just one kind of folks. Folks.”- has guided my interactions with people ever since. I haven’t seen the movie, but I would assume that by the time the line registered with you, the scene would have shifted to something quite different.
One line from a thousand page tome of James Michener – “An age is called Dark not because the light fails to shine, but because people refuse to see it.” - has stayed with me for so long, that when I accidentally stumbled upon the quote a few days back, I greeted it as I would an old friend. There are many equally memorable lines in movies, but few of as peripheral to the main storyline as this one was.

Forget the musty smell of an old book, and the mint fresh smell of a new book. Forget the slight crackle the pages make when you turn them. Forget the feel of paper, the weight of the book pressing down on your wrists. Forget all those, because there may well be a future where there are no books as we know them.
But even if you take away the multi-sensory pleasure that books give me and leave only the words, I cannot comprehend a future without books and reading. How then can people willingly subject themselves to a life without what to me is the life-force?

I do not ask you what reading means to you, because if you have got this far, I know your answer. But I do want to know if you know how to deal with morons such as that one?

And what memorable lines do you remember from books read five days, or five decades back?
_____
Images - author's own, taken on the streets of Bombay, India
Posted by Natasha at 12:00 PM

I'd tell him that movies are for simple people with no sense of imagination!
Yes, I'm a movie junkie, but nothing beats a good read and the opportunity to see things in my mind that can be seen nowhere else on earth.

You said it, Alex. And the next time I get drawn into an argument of this kind, I think I am going to say just that.

When I first read this post I was quite provoked, but this time I only felt bad for this person, Natasha. The things he misses out on, and he is not even aware of it!

The best nuances in the best books cannot be portrayed in movies, even by the best actors. There are strong limits to what the screen can hold and the camera can capture, even in this age of CGI. I've fantasized about what my WiP would look like on the big screen. One of the central features in it is so abstract, yet so real and tangible at the same time, that to try and portray it in film would amount to cheesy crap. I'm pretty sure it's just not possible.

Don't get me wrong, I love a good movie. It's just not a replacement. The imagination is a much more versatile screen.

I love movies but they never come close to a book. Seldom can those images come close to what I have imagined.
IMHO people like the one you met aren't tired. They are lazy. For us it is an enjoyable effort to think and to dream or imagine. For others, they prefer to be spoon fed what they should know.
Ill bet he could describe the bodies in his movies but would have no idea of the plot or if there was one, the message.
There really is no answer for these types.
Giggles and Guns

@ Mari - it is only deep sorrow I feel for someone who never realised the magic of books. It is only half a life that they lead.

@ Rosie - totally agree with you. Half the fun of reading is filling in the blanks.

@ Mary - quite true. *sigh* I can perhaps understand what compels people to turn to the TV when they are really tired, but to denounce books completely?

beautifully captured all the things I love about books--even the ones I don't find so appealing... The linger, the going back to reread, the filling in the details, the smell...

My memories are all crowding together, but I have heard the argument "wasting time reading" and that always bugs me. If anything you're learning, growing, evolving. Or not. ;p

It's so interesting, isn't it? I think it has to do with how a person cares to engage--movies are passive--sometimes fabulous, but ask very little of the watcher. A book allows you to enter your own experiences into the equation--the same book is very different read at different times in ones life, because you are a PART of it.

I've read this post about 5 times now, and I still can't comprehend that mindset... I do love movies (especially when I'm knitting), but for me the main thing that they can NEVER capture is internal monologue/debate/growth/whathaveyou that goes on inside characters' heads. Voiceover is so cheesy, and no matter how good an actor you have in the role, there's only so much you can show on a face. I do feel so very bad for this chap - not only is he missing out on one of the greatest pleasures on earth, if he has kids he may pass this mentality down, and then where will we be? Anyway, I'd write more, but I want to finish reading this book. ;-)

I feel sorry for people who can't (or won't) find the magic in books. There's nothing like it. Never will be.

I've heard that at bookstores before, when I've done signings. I reticently hand a shopper a bookmark and ask if they'd be interested in info on my book and they say they don't read. (!) They're just in the store to shop for a friend.

I'm always embarrassed for them and get really flustered, but it's completely wasted because they don't care a bit!

Your post gave me chill bumps--not only the subject matter, but your defense of books--well written!

I think watching movies is dreaming a complete but second hand dream, and reading is dreaming your own dream by means of a list of notes.

For example, you may have made jam, perhaps according to a recipe. When you open the jar to taste the jam, you might recall harvesting and straining the fruit; scent and steam rising up from the cooking pot; sugary drops sparking out and landing on the hot range, spluttering and hissing; fear that this pot, by some stupid accident, might turn over and the boiling liquid pour out and hit your chest and belly; the sudden pang when you realise that you forgot to add the spoonfull of Curacao to refine the product. You will think of all these details, which were never part of the recipe itself. They exist through you; no one will recall exactly the same. You will not think of this achievement as work (the only real toil here was the act of cooking, as the only toil in reading good writing is the act of turning the page). Still, what you feel and see and hear as you taste that jam comes from yourself and is unique.

Of course, you can also buy jam and taste that.