If, like they say, a picture is worth a thousand words, we believe that a story sparked off by a picture can be told in just a hundred. For well over two years, we have been amusing ourselves by writing drabbles- stories told in exactly 100 words. And a year and a half back, we went public with our drabbles inspired by artworks.
Not content with creating The Burrow- the largest collection of art-inspired drabbles in the Universe- we are now looking at nothing short of World Domination. We want every man, woman and on the planet to start drabbling, and we are starting with you. Yes, YOU.
Every Sunday, we will publish a visual image- it may be a painting, digital art, photograph, or a stained glass window (who knows, it may even be a set of fingerprints or a blank canvas?) – and we want You to write a drabble inspired by the image. It could be a complete story, or a conversation. It could be something inspired by an element in the image, or a description of the image itself. It could be funny, or sad. It could be a memoir, or slapstick. It could even be a song or a poem. In short, it could be anything, as long as it is exactly 100 words long (a handy word count tool custom designed by Jason).
Once you are done, send in your entries to us at theburrow360 (at) gmail dot com by Thursday (July 22, 2010) midnight GMT. By the end of next week we will decide on the winner, who will be announced on Saturday. There are no tangible prizes, but the winning drabble will be posted on the blog. And who knows, in addition to the honour and glory of being featured as a winner, you may even get to take home a sparkly Winner badge to display on your website.
The image for this week is a photograph I took on the streets of Bombay, India, five months back. The photograph whispered to me the stories it could tell, but I never got down to penning any of them down. Maybe I was waiting for the fantastic stories that I know you are going to come up with- 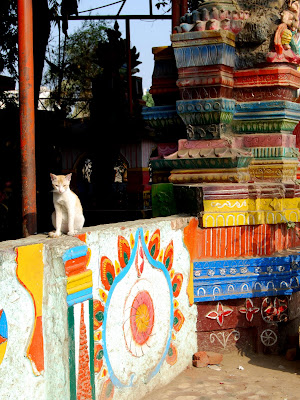 To recapitulate -
Write a drabble (100 word long story) based on the image
Send it to theburrow360 (at) gmail dot com by Thursday, midnight, GMT. Make sure to write "Drabble Dare # 2" in the subject field of the email.
Bite fingernails until Saturday – and check back in!
For this week's Drabble Dare only (since I still can't get over the fact that a photograph taken by me is sandwiched between those of two Masters), I've up-ed the stakes? This week's winner gets a 8*10 print of the photograph, and all contributors get the photograph in the largest resolution possible (and the highest resolution is pretty high for this particular one) by e-mail- if they ask for it.
Happy Writing!
Posted by Natasha at 12:00 PM

What a beautiful picture, Rayna! I love the colors...and the cat.

Rayna, you always have the cutest photos.

(I will jump in the fun once school starts again.)

That's a fantastic photo. The colors are beautiful. :)

It really is a great photo. That cat's expression says an awful lot!

So many vibrant colors. I am happy you chose this one for the challenge.

Thought of something right away for this one. It's good practice.

Rayna! I didn't expect to find you when I clicked over here. This is a great writing exercise and I hope I can drabble this week to you!

How about I up the stakes? This week's winner gets a 8*10 print of the photograph, and all contributors get the photograph in the largest resolution possible by mail- if they ask for it.

Open for this week only, because that kitty has waited too long for the story to be told.

Does that tempt you, Leigh?

arrgh!!! :D But you're the drabble mistress... or Mistress of all things drabble.

How can I compete? ;p

Such a great shot! Now, how to choose a drabble focus...?

Ooooh
I'd love to see drabbles written around this photo. :)