"Facebook is like one of those people who keeps getting plastic surgery to 'look better' but gets the 'WTF just happened' reaction instead" ~ @Evil_Dumbledore
You think you hate the new Facebook update? It’s messy, and difficult to navigate, and not to mention – it’s driving you up the wall that all your Facebook friends hate it and are complaining loudly about it in YOUR feed?
Well, you’re wrong. You don’t hate it yet. But you might once you read this.
Let’s face(book) it – Facebook has been watching us for a long time. They know what you like – or what the target group they think you belong in like – just take a look at the ads in your sidebar. If you’re divorced they’ll advertize dating agencies. If you’re a woman, they’ll advertize menstrual aids or hairspray. And if you’re old they’ll advertize gravestones. Or something. 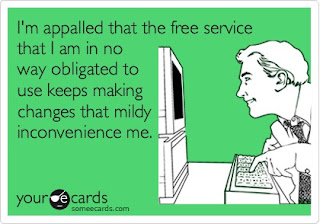 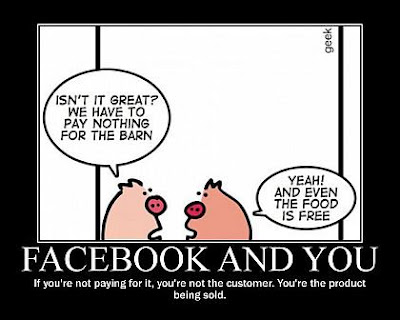 Posted by Cruella Collett at 12:00 PM

"The trick is, as it always has been, to share on Facebook only what you are comfortable sharing with everyone in the world."

GREAT post. I don't think anyone really cares what their friends post on Facebook. As we've seen, you could write a suicide note and still have people LOL and !!!!! at your demise. It's a wilful distortion of reality and operates on that quasi-fictitious level.

Fantastic post, Mari.
And within a paragraph of reading, I knew just who had written it!

Dunx - true dat. The main reason people are enraged whenever there's a change to the Facebook privacy settings is that Facebook successfully have fooled us to think that we can be "private" there. Which is wrong.

Mark - sadly, that is at least partly true. I think if a close friend posted a suicide note, I *would* react, but then again - I might not think it was serious. As you say - everything on Facebook is quasi-fictitious.

Natasha - I gave myself away, didn't I? ;) Well, I do spend too much time on Facebook these days, so I should be something of an authority by now.

This was great, Mari--and very informative. I think on my writer's profile it is time to 'group' people--it is just too many for me to read the ticker at ALL, and there are really tiers of relationships anyway, including a lot of people who sent requests and I accepted not having a CLUE who they were.

Excellent post! You bulleted every point of concern I am having with the new Facebook format (stalking).