Bill Watterson's hit comic strip Calvin and Hobbes has been remarked upon for its commentary on society and (occasionally) psychology. But the comic is rich enough that a stray nut such as myself can see something else entirely.

Style
The primary character is Calvin, an imaginative six-year-old boy. Much of the strip is seen from Calvin's perspective, which means the reader sees whatever Calvin imagines. Then we are frequently shifted back to a 'normal' perspective to show that these events were only the product of Calvin's mind.

Hints
All in good fun, right? But the strip drops occasional hints that our epistemology may be flawed. Calvin's father gives outlandish explanations for how the world works, telling Calving that light bulbs are magic and that the sun sets in Arizona, thereby turning the desert rocks red. And although Calvin rejects his father's moral and character lessons, he remarks after one of these flawed explanations, "I hope someday I'm as smart as dad is."

But Calvin doesn't always believe his father. He once tells Hobbes,

Since September it's just gotten colder and colder. There's less daylight now, I've noticed too. This can only mean one thing - the sun is going out. In a few more months the Earth will be a dark and lifeless ball of ice. Dad says the sun isn't going out. He says its colder because the earth's orbit is taking us farther from the sun. He says winter will be here soon.
Isn't it sad how some people's grip on their lives is so precarious that they'll embrace any preposterous delusion rather than face an occasional bleak truth?

Just as curious as Calvin's misdirected evaluation is the fact that his father is wrong on nearly every count. Seasonal change is caused by the Earth's axial tilt; as winter approaches in the northern hemisphere, the Earth is moving closer to the sun; and the planet overall is actually warmer when it's further away (the northern hemisphere has a lot more land, so its summer absorbs more solar radiation than the southern hemisphere's summer).

If there are lessons here-- unintentional, I'm sure-- the first is that the trappings of science do not automatically validate a theory.

The second, and perhaps more esoteric, lesson is that a model should not be confused with reality. For example, ask a friend-- or ask yourself-- why objects fall toward the Earth. Ask why the Earth goes around the sun.

Hold that thought for a minute...

Hobbes is Calvin's tiger. At first blush, he seems to be a stuffed tiger who is anthropomorphized by another flight of Calvin's fancy. But with a more thorough examination, this is seen to be impossible.

Calvin and Hobbes frequently fight with one another. Hobbes pounces on Calvin when Calvin returns home from school, throws snowballs at him, and knows things that Calvin doesn't. They climb trees together that Calvin could not possibly climb while carrying a large, stuffed tiger, and there is at least one tree that Calvin cannot even climb alone-- he depends on Hobbes' tiger skills to scale the trunk so Hobbes can drop him a rope.

In the most telling incident, Hobbes once tied Calvin to a chair in Calvin's room. Calvin's parents were as baffled as Sir Geoffrey Ingram Taylor.

Taylor performed the first low-intensity double-slit experiment. You see, once upon a time, photons (light) were considered to be particles. Isaac Newton thought so. The photoelectric effect seemed to confirm it.

But other experiments suggested otherwise. Passing photons through a double slit produces an interference pattern that can only be caused by overlapping waves. 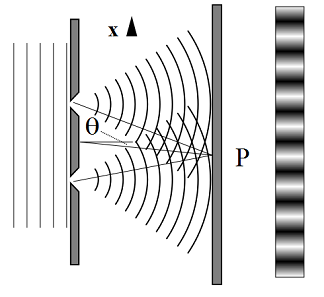 The bar at the far right is a frontal view of the target panel, showing the interference pattern.
In 1909, Taylor did this experiment sending through just one photon at a time, telling the photon in no uncertain terms that it was going to have to pick a slit and go with it. Nonetheless, after many photons had been sent through, the same pattern emerged, showing that those elusive little photons were capable of interfering with themselves as a result of the neighboring slit which they didn't pass through but, you know, might have.

Thus was the foundation of quantum mechanics confirmed. Everything in the universe has wave-particle duality.


And so my deep thought for today is this: Hobbes is a quantum tiger. He has stuffed-anthropomorphic duality. Whether any experiment measures him as stuffed or anthropomorphic depends on the nature of the experiment. If you try very hard to force the situation-- say, by having Hobbes tie Calvin to a chair-- you will get a "what the hell?" moment just like the low-intensity double slit experiment.


Models
Now we return to today's trivia question: What makes objects fall toward the Earth and causes the Earth to go around the sun?

Did you say "gravity"? You are correct! And totally wrong!

Newton's Law of Gravity is a law and not a theory. In science, a law describes a consistently observed empirical relationship without any underlying explanation. In other words, the law tells us what happens, but not why it happens. Scientific theories describe causes. For now, the theory of gravity is covered by the general theory of relativity.

Of course, any theory has to be based on further and more basic assumptions for which there are no explained causes. At some point, you have to say "charge exists as a fundamental quality" and let it go at that. But in science, that should only be happening when something is reduced to elementary physics.


As a more illustrative example, consider the biological observation that mammals get bigger and fatter as one moves closer to the poles. This could be described as a law. But being close to the poles does not cause mammals to get fatter. Fundamentally, it is not even correct to say that cold climate causes mammals to get fatter (although it may be convenient, and perfectly acceptable, to posit such an explanation among biologists who do understand the root causes). One does not state the true cause until one notes that DNA mutates, replicates, and determines the characteristics of an organism. (And at that point, the biologist can be satisfied that he's reached the root cause within his domain, and pass on the 'why' of DNA's molecular properties to the chemists and physicists).

The worst idiots are the conventional economists (you knew I couldn't write a blog without taking a shot). They have no theories whatsoever and rely entirely upon spurious laws. The believe that increased consumer spending causes increased economic production. And it's not just the simple post hoc, ergo propter hoc fallacies that trip them up. The also believe that low interest rates spur economic development, and can point to "experiments" (Central Bank manipulation) that seem to confirm this. But they are as lost and reckless as a biologist who dumps sheep in Antarctica to make them grow more woolly then scratches his head when the sheep all die.

I LOVE your Quantum explanation of Hobbes. I think that is very apt. And I love it when you get all sciencey... Honestly... It's hot. Hotter than if you put on fishnets and danced for me and I think you know me well enough to know how hot i think a man in fishnets is.

[to anyone reading who DOESN'T know me--this is something I honestly dig--a man in touch with his inner princess is far more likely to be be an interesting playmate.]

[Hart Johnson wrote] "And I love it when you get all sciencey... Honestly... It's hot. Hotter than if you put on fishnets and danced for me..."

I wish you'd said something before I spent all that money on stockings. I can get sciencey for free.
-J

You two crack me up! Although, like the tartlette, I think I get het up by guys who know stuff! Not that it is so rare, not as rare as men in fishnets that aren't fishing, but yeah, willing to tell you in an amusing and non-condescending way - yeah, rare.
Thanks dearios!

Calvin & Hobbes got me through my turbulent teens. I loved Waterson's underlying socioeconomic political views. Hobbes did stump me at first. I wasn't sure if he was real like or merely a figment of Calvin's imagination. However, your theory of Hobbes' anthropomorphic duality is interesting.

I will be honest, you kind of lost me on the double slit experiment. Quantum physics has always been a mystery to me.