Ahoy mateys! It be Talk Like a Pirate Day and I be assigned Reading Monday so methinks the best wager I could make would be presentin' books about Pirates fer yer readin' pleasure. Now I haen't read many tale on Pirates, so I asked me hearties fer a bit'o help with th' list, but these be the books they be generat'n. 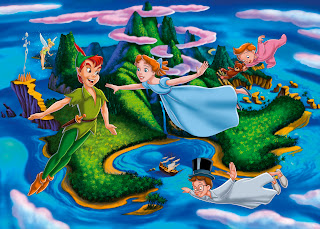 Peter Pan by JM Barrie. Peter Pan is actually a character, rather than a book. He first appeared in an adult novel in 1902 called The Little White Bird. He was made into a play, though, and the play adapted into the novel Peter Pan and Wendy.

I Love My Pirate Papa by Laura Leuck and Kyle Stone. A LITTLE kids' book. A pirate's son shares the things he loves about his father, including climbing the mast together to yell "Land Ho" and sharing the booty when they find buried treasure. 35,000 first printing.

Griffin Pirate Stories by Sheila K. McCullagh (she also wrote the Dragon Pirate Stories). I had a tough time finding a description of these except for the Wiki list that says: The Griffin Pirate Stories are a collection of books written as a scheme for primary schools during the 1970s/1980s by Sheila K McCullagh. Not to be confused with the "Dragon Pirate Stories" by the same author, the books spanned 2 series each containing 10 titles, though a separate stand alone book entitled "Pirate I Spy" was also released as part of the same scheme. That is exactly what I know. Nothing else, as I couldn't find more...

Peter and the Starcatchers by Dave Barry and Ridley Pearson. In the hands of two such great writers, collaborating to have fun, this could hardly be anything but a fun read. I wish I still had kids who wanted me to read with them.

Sinbad is more a collection like fairy tales, but from Middle Eastern origin. The character makes his way into many stories over the years, but seems to stem from an oral, storytelling source originally. This is what Wiki had to say on the matter. 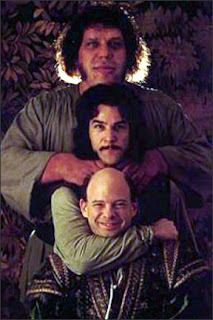 Princess Bride, by William Goldman. Note that the movie statement 'by S. Morgenstern' is a tactic the BOOK actually uses. The book CLAIMS to be an abridgment of a much longer tale. Now I haven't read the book, but I've been assured it is every bit as good as the movie, which is quite a feat, since this is an AMAZINGLY fantastic movie with the best movie quotes EVER. The pirate is in the form of the “Dread Pirate Roberts' and is only a subplot, but this is too good a story to skip.

Stardust by Neil Gaiman. This is another one I've only seen the movie on, but HOLY COW, Neil Gaiman? It can hardly be bad. It was his first book, and the movie hints at all the strange bendies Gaiman is famous for. I especially love the cross-dressing pirate captain, though... divine. 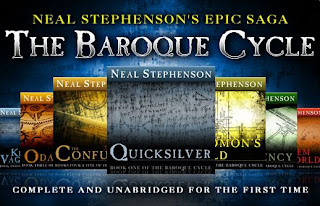 The Baroque Cycle by Neal Stephenson. This series includes 8 books of historical fiction (with some sci-fi elements—does this remind anybody besides me of steampunk?)... anyway, one of the primary characters, 'Half-cocked Jack' Shaftoe, appears to be... a pirate...

Flint and Silver by John Drake. This is a (much later written) prequel to Treasure Island.

The Pirate's Daughter by Margaret Cezair-Thompson. A fictional account of the years that movie star Errol Flynn spent on Navy Island, off the coast of Jamaica, describes his scandalous affair with a beautiful young teenager and the birth of their love child, May.

Liveship Trilogy by Robin Hobb (Ship of Magic, The Mad Ship and Ship of Destiny) These are fantasy and the ship captain is a woman (both winners, eh?) but the reviews look really good. 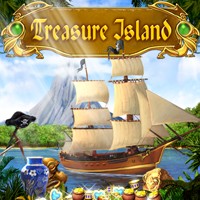 Treasure Island by Robert Louis Stevenson. AND, we hit one I've read. This is a great book. And for anyone wanting a piece of Tart Trivia, when HWMNBMOTI was in his punk band, all the members had Treasure Island names. I am married to Billy Bones. *Cough* It's a story of a boy working in an inn who overhears something and stows away... on a pirate ship, or so he learns. It is a great tale.

Kidnapped also by Robert Louis Stevenson, but said to be based on true events among the Scottish aristocracy. This is the Wiki plot summary: Kidnapped: Being Memoirs of the Adventures of David Balfour in the Year 1751: How he was Kidnapped and Cast away; his Sufferings in a Desert Isle; his Journey in the Wild Highlands; his acquaintance with Alan Breck Stewart and other notorious Highland Jacobites; with all that he Suffered at the hands of his Uncle, Ebenezer Balfour of Shaws, falsely so-called: Written by Himself and now set forth by Robert Louis Stevenson.

Lensman Series by EE (Doc) Smith. This is serial science fiction—a space opera, and was runner up for a Hugo award for best all time series (wow). It was published first in magazines. And the plot summary goes on for days... It looks worth checking out, but I am not going to paste it all here. Instead, a link. Anyway... space pirate... and there is no reason why not (any Firefly fan should know that).

Jamaica Inn by Daphne du Maurier (huh... and I thought all she wrote was Rebecca). It appears to have a lot of the elements I would expect from du Maurier—a young woman finding herself living someplace relatively unbearable... but there is an element that does indeed appear to be piracy (or something very akin to it).

Captain Blood by Rafael Sabatini (man, there's a name that's fun to say). An enslaved doctor and his chained companions escape to become Robin Hood type pirates. Hey, this looks good! They should make a movie! DOH! They did! In 1935! *cough* Looks like it's definitely a good story.

Hmm. I haven't read Stardust or The Princess Bride either, but I also loved both films.

Shiver me timbers, what a list! ;-) Stephenson's Baroque Cycle only has 3 books though; looks like maybe they broke 'em up into multiple volumes for the audio, 'cause yeah, they're massive. :-) I have a strange desire to track down that 1935 film now...

Wow! I didn't realize I was a pirate lover. I've actually read many of these books. :D