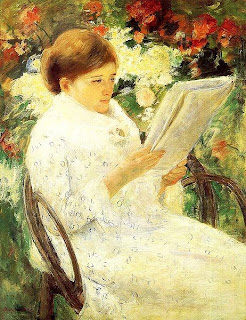 I haven't read many books lately.  Honestly, with teaching, taking care of my family and home, there doesn't seem to be a spare moment to indulge in my favorite pastime.  However, this summer I did get to read one classic, reread a favorite sci-fi of mine and am currently enjoying the first in a series of four mysteries.  Did you think from the title of this post, that I would focus on novels based around marriage and romance?  Well, you're partly correct.  :D  So here we go . . . 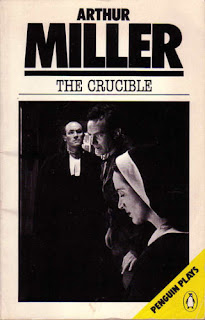 The play The Crucible by Arthur Miller is a book that several of my colleagues have taught to the eleventh grade, simultaneously and in alignment with the beginning of United States History, and was highly recommended to read over the summer.  It is a tale of the Salem Witch Trials during the late 1600's.  It begins with the "possession' of a teenage girl who dabbled in the dark arts.  The story tailspins into a bevy of treachery, adultery and manipulation. Abigail Williams, the adolescent who implicates several of the townspeople as witches, is scorned by John Proctor, a farmer and husband to Elizabeth Proctor.  Abby exploits the court's fear of witchcraft to achieve her means of Elizabeth's destruction.  It is John who questions the court's decisions, Abby's motives and the disintegration of a cohesive community due to hysteria.  John refuses to implicate individuals in town, which consequently would only sully his name and reputation.  Miller equates this witch hunt to the 1950's McCarthy Era in United States history.  Miller was empathetic to John Proctor's cause as he, himself, was accused of believing in Communism.  Miller refused to be coerced by the government and as a result The Crucible was born. Unfortunately, both time periods were disparaging moments when fear ruled society. 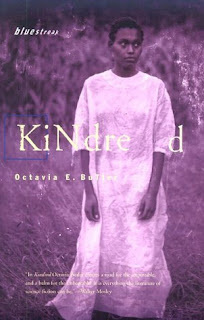 The  second book I read was Kindred by Octavia Butler.  This is a sci-fi novel written during the late 1970's but is still very relevant today.  The protagonist, Dana Franklin, is a young African American woman who involuntarily travels back in time to the antebellum South.  Dana is drawn to the slave era by Rufus, Weylin, a young, white boy who is consequently the son of the master who owned her ancestors.  She saves Rufus from numerous dangerous situations and experiences the trials of slavery to ensure that her familial line survives this precarious moment in history.  I highly recommend this book if you are into mystery, time travel and human relationships.  I've read this book over three times and each time I find something new. 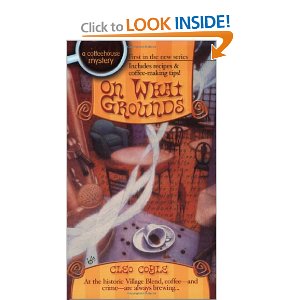 Finally, I am currently indulging in On What Grounds: Coffeehouse Mysteries No. 1 by Cleo Coyle.  I bought this book at the beginning of July and somehow just never got around to reading it.  The book grabbed me from the very first page.  Her language is so descriptive and the words just seem to meld together like a really delicious caramel macchiato. Now, I have lived in New York for over thirty-four years, damn didn't mean to tell my age, and the locations of various landmarks is very accurate.  I am only a quarter of way through the novel and find myself fully immersed in this tale of intrigue.  Clare Cosi, a manager at the Village Blend Coffee, who moves from New Jersey to a nice little apartment in downtown Manhattan.  On her first morning back to work, she discovers the unconscious body of one of her coworkers.  With the cafe trashed and her colleague rushed to the hospital, Clare's questions are unanswered and her attention diverted to the sexy police officer.  The game is afoot!  By the way, my fifteen year-old daughter has read this novel and asked me to purchase the other books in the series.  It's a great read so far.

What books are you currently reading?  Inquiring minds want to know!  :D

Oooooh, can I take credit for recommending the Coffeehouse Mysteries? ;-) I do love them... and coffee... mmm... I haven't made it to Butler yet, but I think I'll have to try to read some of hers this year, and as for The Crucible, I've taken almost everyone else to Salem, get yourself up here and I'll drag you there too. :-)

Yes, I give you all the credit for Coyle's Coffeehouse Mystery. I couldn't remember who recommended them. One day, I'll take you up on your Salem offer. *scared* I've read almost all of Butler's novels. There are so many layers to her writing. Butler is awesome.

Kindred sounds like my kind of book. Thanks for the reccomendation, Chary.

And Leanne, I love the Coffeehouse Mysteries too - unfortunately, I wasn't paying attention when you recommended it, so had to stumble around in the dark a lot before finding it :-(