Books that have gone to hospital with me

If you were hoping for Part 2 of my review of books set in India and/ or by Indian authors, you have to wait a few more months. Life got in the way, and I didn't want to churn out a post that did not do justice to the books I wanted to write about.

So, continuing from Chary's post of last week, here is a random collection of books, each of which has something in common- they were the books I was reading during each of my hospital stays. Strangely, though I intended reading all of them again, I've never quite got down to doing so- guess they are too closely associated with the sterile smell of a hospital for me to want to read them in a more congenial environment. 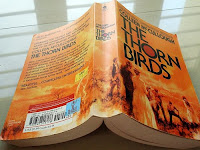 The first time I was admitted to hospital during my adult life was almost eight years back, when I was expecting my first child. My contractions had been rather strong when I was admitted into the labour ward, so I was pretty sure I would finish the book I had taken with me only after I got back home with the baby. The book was Colleen McCullough’s 'The Thorn Birds’, and my labour dragged on so long that not only did I finish the book, I had even to make the hubby get me another book to see me through the second day. You might think 'The Thorn Birds', with its story of unwanted pregnancies, of babies conceived and born in hate and deceit is not the right book to read when you are in labour, but the book suited the mood perfectly. My frustration with a labour not progressing in the manner in which I wanted it to perfectly mirrored the frustrations that form the bedrock of the book, and I perhaps enjoyed  the book more than I would have had I read it in a different context. Whether that's the reason I have not gone back to the book or not, I am not sure about.

When I was done with 'The Thornbirds', the book my husband, in his eternal wisdom brought for me was Sophie’s  World – “I don’t know how the book is , but it is think, so you will not be bothering me again for awhile”. I read all my favourite parts in hospital, and strangely, haven’t returned to that book since. But I am not sure if the book counts as a ‘hospital book’, because I had read it more than once before and did not finish it in hospital. 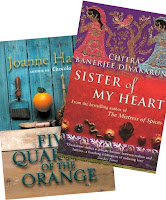 My second child popped out as soon as I got myself admitted into the nursing home, so my next hospital stint was five years later, when I was admitted to hospital because of my falling platelet levels. I knew I had only to last out my malaria, for the levels to pick up, but since the doctor insisted I be admitted, I was. Two books went to hospital with me – Joane Harris’ ‘Five Quarters of the Orange’ and Chitra Banerjee Divakaruni’s ‘Sister of my Heart’.

The first I liked a lot. It was a stage in my life when I was feeling quite dissatisfied with the way my life was proceeding, and anything that involved human drama was bound to appeal. And the tragic tale of the woman not in control of herself was one that in some way resonated with me. Since I liked the book then, I picked it up again more than once, but I have just not succeeded in re-reading the book. Maybe I have outgrown that phase- instead of struggling to fill my day with activities with some semblence of meaning, I now find that 24 hours are not enough. And Joanne Harris can never hold my imagination in a situation such as this.

The Banerjee Divakaruni left me strangely dissatisfied. The book had everything that should have gripped me – a setting I knew and loved, characters and situations that I could relate to, and enough reasonable twists and turns to keep one happy – but it never quite lived up to the potential it showed. The closest metaphor I can think of is of a marathoner starting a race in a sprint, promising to deliver a world best timing, and giving up after 13 miles, and walking the rest of the distance. Perhaps that is the reason 'Sister of my Hearth' remains the only one of Banerjee Divakaruni's books that I have ever read. 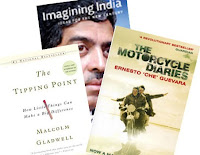 When I was admitted to hospital for a hysterectomy a little over two years back, I took along Nandan Nilakeni’s ‘Imagining India’. It was just the kind of book I would avoid if I could think of an excuse to do so, which is why I put myself in a situation where I had no choice but to read the book. The book gripped me from the first page, and by the evening of my first day in hospital, I had finished the book- all 600 plus pages of it. The book remains the best account of contemporary India that I have read- a book that gives you the reality without suger-coating it, and yet, holds out the promise of a future much brighter than the past. A book that I would declare a must-read for anyone wanting to understand the India of the Today.


The second day that I was in hospital, I galloped through ‘Motorcycle Diaries’ and Malcom Gladwell's ‘The Tipping Point’, and liked both of them. Strangely, though, I do not remember too much of either book, which may be because I read both books in the shadow of a book that shone with such brilliance, it dulled everything else. Maybe I should read both those books again to see if I can recall why I liked them, despite not taking in too much of them, or maybe it is better to just leave them alone.

So there you are- an assorted collection of books; the list couldn't really have been more random.

Do you have any books that you associate with particular periods of your life? Or am I the only nutcase, who can see the background in which she read a book for many of the books that she's read.
Posted by Natasha at 2:00 PM

I do have certain books that associate Judy Blume books with my adolescence. Deenie, Are You There God It's Me Margaret and Tiger Eyes are just a few of the books that got me through my turbulent teens.

Oh and how could I forget the Sweet Valley High series. Awesome post and you are not the only nutcase! :D