Do I Smell Revolution?

You know, I don't always know much about what's going on. I tend to move in and out of politics, mostly because my feelings are so strong, that sometimes I just can't face reality. But there is something that is giving me hope... evidence that some of the current activities in the US are working...

Here is an article about the response of some congress people in the US. What I like is the evidence they are scared. They are claiming the protesters might bring about a change in policy. I say bring it on. A policy change is exactly what's needed.

Or there is this by Paul Krugman at the New York Times (who, in his defense, has been saying the right stuff the whole time), but he sums up this response well.

The dialog has really changed. I think some people glommed onto the Tea Party because they were frustrated, but the tea party is actually a 'small government, no-reality' movement—they don't understand that real people are hurting and to STOP hurting, they need jobs, and the only way to create jobs is to get money into the hands of the people who SPEND their money—the poor and middle class—the wealthy are already spending what they would spend... their money is largely saved. Yes, much is invested, but in the decade since they got their tax cuts, these investments have NOT created jobs. Jobs come when people demand more goods and services... and won't millions of people with more money demand more goods and services than dozens with more that already don't spend what they have?


I love how this process is snow-balling. When the 'Occupy Wall Street' movement first started, they were ignored by most of the press—resounding silence and a refusal by 'forces of power' to acknowledge that anything was happening... but then that refusal to discuss them got press in itself...

The dialog has changed. The facebook stream has changed... People who couldn't agree on raising taxes on the rich, CAN agree on ineffective bailouts, and the rights of the masses to protest... The uniting We Are The 99% is too true... The people with aspirations of being in the top 5-10%, worried about their future taxes when they 'make it' still believe that once you are top 1%, you maybe shouldn't get a tax cut for it...

I love the faces of the new, rational voice making their claims. I love the old quotes being dusted off and shared. Here are a couple of those quotes I've loved: 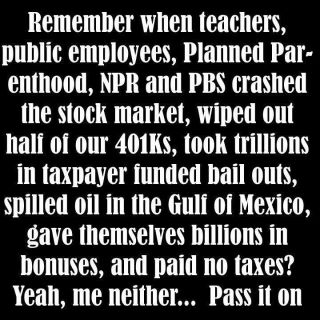 I guess to me, though, the BIG thing is the tone has changed. It doesn't feel NEARLY so much like the people commenting are divided exactly in half. It is far more like a few embarrassed defenders of bad behavior are trying to act like 'it's nothing'. 'It's disorganized' 'It will go nowhere.' But Congressman King up there PROVES they are actually afraid... This ISN'T nothing... this is AT LAST Democracy. People who GET IT finally outnumber robots who are chanting what they're told against their own self-interest. FINALLY, reason is getting through.

It's the first time in a long time I've felt hopeful that there are enough intelligent people in the US electorate to make a difference.

My buddy Hannah also blogged about this today, but gives far more specifics as to what Occupy Wallstreet does and doesn't want. it's worth a read (she always is).
Posted by Hart Johnson at 12:00 PM

Hart, it's interesting that you posted a picture of Peter King and his comments about left-wing protesters in the 1960s and that it was a mistake to allow them to take to the streets. I found another response poster.

Go Hart!
We say that we are writers and that words are strong. If that is so then it is time for us to BE informed, to inform and to stand tall in what we believe.

Thanks for the push.

I'm with you - like you don't know that - I'm sick to high heavens of all of this nonchalant thievery. Rise up!

Russell-is that a real pic? Or is it photoshopped? Some important people there, definitely, and they were all 60s voices. I had assumed those '60s protestors' were civil rights/racial equality folks, but the 60s also had LBJs war on poverty, and it makes sense jobs would be central there.

Mary-I definitely think it's important to spread the word... those of us who already have platforms can reach more people, so let's do it!

Jan-Oh, sister, I KNOW you're with me!

Rock on, Hart. Yep, I was talking about this over the weekend, and as I was trying to be the voice of reason, I wasn't even buying it myself. It's time for the waste of our tax dollars to stop--that's something everyone can at least agree on~ :o) <3

Very impressive post with some humorous and very true pictures!! I'm so proud of those in support of these protesters, they need all the support they can get in order to stay on Wall Street until the changes are made. I love their bravery and this is an incredible movement! Thanks for sharing this...

Also, Kennedy really scared corporations and the top 1%. He was the last president to attempt to remove the country from the unconstitutional hands of the Federal Reserve. He's my favorite and I absolutely love that quote.

Leigh-yeah, a little righteous indignation really works sometimes! Keep in mind though, not all spending of tax dollars is wasting--but those bailouts DEFINTELY needed a bunch of rules attached. I like regulations, myself, as I don't believe corporations can be trusted.

Alisia-thank you! I love the bravery, too. And I love that they've kept it real, rather than falling into violence. The Fed is definitely an institution with some blame to accept... Turns out Greenspan was doing more voodoo than magic, and the piper now needs to be paid.

He was quoted word from word. The picture of MLK below it was added for the purpose of making a point. King denounced the protests of the 1960s. The question is was he referring to the racial equality protests. Many times politicians say things they wished they never did because it usually comes back around and bites them.

I certainly don't know all of the facts (and I don't how many of the facts are easily available to us), but I have my opinions. Bottom line is that I believe there is a real imbalance in the societal strata in our country and around the world.

I've always felt the CEOs were vastly overpaid and I see no justification when a company shows a mega loss and has to lay off multitudes of employees while the CEO and other officers walk away with pockets bulging with money. There's something wrong with that for sure.

So many problems and I could go on and on I guess.


Lee
Tossing It Out

Russell-a friend shared another pic of the same rally, I believe. I just hadn't known about the jobs focus, but it makes sense that where equality was the issue, jobs would be central.

Lee-Man, you said it. I don't think there is EVER a reason to pay millions to somebody who makes the problem worse--golden parachutes? NO WAY. In fact I'd really prefer a wage cap... maybe allow for a profit share of some sort above that, but otherwise, CEO wages should be tied to average employee wages in some realistic way.

Hi Hart! Just saw your comment on Heather's blog and wanted to come and see what you had to say too. I also blogged on Occupy (on the 6th) because it's important. Because things have to change. Because the world, not just the US is headed in the wrong direction and we are at the helm. Thanks for making a stand! It all makes a difference. I wonder if we should all blog on this on the same day... would it mean anything? Would it be a bit like the Whos in Whoville saying "We are Here, We are here, We are here!"