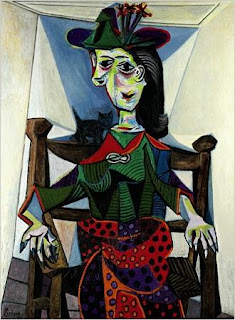 You all know Picasso, right? Stupid question. Assuming that every person in the world has heard of at least five painters (which isn’t necessarily the case, I know),Picasso is probably going to be one of them. The reason he is so famous is because of his inventiveness within his genre. Take one quick look at anyone of his famous paintings, and you immediately know who the painter is. The geometric shapes, the misplaced human limbs, the almost childlike absurdity to it all.
Here’s something that is perhaps more surprising than any of the information offered in the paragraph above: I’m not all that fond of Picasso’s famous paintings. I used to really dislike them, actually. Mostly because they were not “pretty”. And because they looked like something I could make myself.
This is where I was wrong.
When I was eighteen I took an extra year of French in school – not because I loved learning the language, per se, but because I really didn’t want to take the alternative course (which was “Law”, and I hated the teacher). Also, I imagined that I would go to Paris and live there someday (which in theory still might happen,but certainly not because I speak the language, because I don’t, anymore).
As a result of the extra year of French in high school, though, I had the chance to visit Paris that spring. We were four students, free of any commitments, sent thereto learn how to speak French (which we did, sort of, at least temporarily). We met some great people, saw some great sights, and my desire for living in Paris didn’t diminish. One of the things we did was to visit the Picasso museum. I wasn’t overly thrilled, but I tagged along.
I am glad I did.
The visit to that museum taught me something about rules, and how to break them.
Let there be no doubt, Picasso was a great artist. The tour around that museum showed the progress of Picasso as an artist, and I was forced to rethink my view of him. From simple sketches as life-like as anything you can capture with your iPhone, through blue and rose periods, to cubism and the experimental stuff we all know. Picasso knew all the rules, and because he did, he could break them. That is what makes him special. I couldn’t have done that. I couldn’t have painted even the really simple works of his. They too demand skill.
The same thing goes for writing. There will always be a set of “rules” you’re supposed to know about before you can allow yourself to not use them. Certain no-no’s when you write can be allowed if you are aware of why you’re breaking them, and the purpose it serves. Like broken sentences. If you have an abundance of them, it is just annoying. But if you have one here and one there, it might actually work. Some people are even so aware of the rules that they are allowed to break them ALL the time. For instance, José Saramago. Or Irvine Welsh. They are so familiar with the rules that it practically looks as though they aren’t aware there are rules at all! Not unlike Picasso.
Posted by Cruella Collett at 12:00 PM

That was SO interesting, a really good read!

Although this does remind me of a quote I read once...

"There are only three rules to writing a successful novel. Unfortunately nobody knows what the three rules are."

Ok, I don't quite know where I'm going with this... I just know that in my head, it's interesting.

Wonderful Mari! I go in and out of loving and hating Picasso - for sure he inspires emotions. I like modern art and I like rule-breakers, but like you say, you need to know the form to break it. I'm reading an Aussie thriller right now and the guy is brilliant - it is Truth by Peter Temple. He breaks every rule everywhere. My guy thinks it is one of the best books he's ever read, and he's a maniac picky reader. so...rules, eh?

As to what the rules are - to an extent, I think you're right - no one can say absolutistly (that isn't a word, is it? I just broke a rule...) what is and isn't allowed in a novel. BUT, if you do read Saramago or Welsh, it should be pretty clear right from the start that they are at least breaking a certain set of "rules" that most of us would have no problem claiming are fairly set for a novel.


Jan - I think in the long run, only the rule breakers are any interesting. And if you go a long way back, I suppose every writer is a rule breaker. Shakespeare made up half of his vocabulary! Even authors who now seem pretty "conformist" once paved the way with new techniques.

I'll make a point of checking out Temple :)