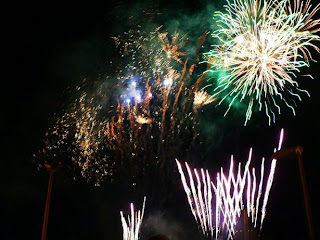 With everyone either writing for NaNo, or knowing someone who is writing for NaNo, we all know how manic November can be, so I have to wonder why the brains behind NaNoWriMo picked the thirty day month that is probably the worst out of the possible choice from four.


September could have been just as bad, I suppose, with new terms (semesters?) at schools and colleges and whatnot, so I guess I can understand why that particular month was vetoed. But what about June or April? Over here in Britain, June may cause problems for those who are busily preparing for their GCSE or A Levels at school, but I'm not sure how the rest of the world would fare. Judging by the variety of ages from the participation of this year's BuNoWriMo ( The Burrow's June wrimo that stole borrowed the 50,000 words in 30 days set-up), I think June would probably be quite good. And as for April, I don't know of anything that might interfere (though I freely admit to ignorance on a large scale, so I could be completely wrong in my assumptions regarding April's suitability).

OK, maybe you might be thinking what's so wrong with November? Let me ramble a bit [more]...

Quite apart from the pre-Christmas higher stress levels and general rushing around like idiots, this side of the pond we have Bonfire Night, which although is technically celebrated on the 5th, in reality tends to last around seven to ten days. To work around school nights, work nights, not to mention the inevitably (if you are in Wales, that is) rainy nights, firework displays and bonfires are events that end up happening on an almost nightly basis. And even if you don't attend them all, they still end up distracting you.

And for my American friends, there is Thanksgiving. I don't really know a lot about this holiday, and I can't be bothered to look it up because one, I am lazy, and two, I haven't written a single word for my NaNo today and I really need to get to it (erk, I didn't write for my blog either, [it is Monday evening here, and I should be blogging today according to my unofficial schedule]. What I do know, though, is that preparations for this day of celebration are almost as convoluted as preparations for Christmas day itself, so I understand how a one day holiday can turn into a week long time-sucker.

Quite apart from all of these distractions, I (of course) have had the Month From Hell so far this November, which I rambled about on my last blog post, and will no doubt grumble about on my next post too. Depending when I get to it, that is. Possibly December. Maybe.

In the meantime, despite the distractions, I will keep going. But even as I do so, there'll be that little question niggling at the back of my mind.

Along with that other little question... why me? *snort*

Er, I made a boo-boo and posted this a little over twelve hours early, and I don't know how to fix it (me being me). Damn schedule/posting options suckered me.

Twelve hours early or not, an interesting topic.

Having had the pleasure of hearing Chris Baty speak about NaNo, I can tell you that the first NaNoWriMo was held in July. November was picked, IIRC, because (a) it is not July; (b) it is dark; and (c) it contains Thanksgiving.

The point about Thanksgiving is that it is a one day delebration, but is usually a four day weekend, and there are precious few of those in the States.

As to April, a good choice but in Britain it often contains Easter, which I remember as being a family holiday. Some people think it's a very important holiday, too (although I just like the long weekend myself).

I found June very difficult to write in - I completely blew it on BuNoWriMo basically because summer was kicking into gear, and that was impossible for me to write around.

So I kind of feel about November what Churchill felt about democracy: it is the absolute worst choice, apart from all the others.

Tara, I hear you. I have a really large family (four generations with 22 grandchildren/23 great grandchildren) and we all meet at one family member's house for Thanksgiving. I have to cook a feast just for home in addition to several dishes to take to the family gathering. In the midst of all this, I have to Christmas shop for above mentioned numbers.

This is why I bowed out this year and decided not to participate in NaNoWriMo.

Ugh. Seriously. November is Hell Month for college students. It's when all of our final papers and projects are due, the last tests of the semester (ie last chance to get grades up) along with all the rest of the end of the semester business to attend to. (And for seniors, grad school stuff, but don't get me started on that..)

Then again, April would be pretty much the same for the spring semester.

*sigh* I agree with the Churchill quote that it's the worst choice.. other than the other worser choices.

It works okay for me, except for the Thing 2 birthday... I am not my family's primary cook though... and i have no problem waiting until December to Christmas shop.--April or June are both okay with me, too--September would be bad--both home and work start new cycles...

But then, you always knew I was easy...

I'm not NaNo writing ... to me nano means ten to the power minus nine. The month from Hell, that's definitely December, first four weeks at least. I don't like the super-commercialized-run-around-shopping-all-kinds-of-crap thing. And since I'm atheist, there's not much else left. Well, the holidays around new year are nice, and the sun is turning, days are getting longer ... guess I'm celebrating Christmas in the old pagan way >:)