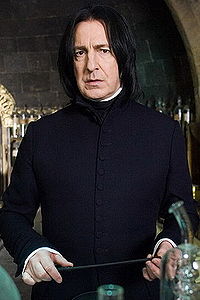 Reading is not all about reading, you know. *nods firmly* Reading can lead to a lot of things, not least inspiring you to write your own stories. One of the best things that reading has led me to in the past, I'd almost forgotten about. In my usual panic of thinking of something to blog about, fellow Burrower Rayna gave me a couple of ideas, all of which I'm sure I'll use one day, but one of which I knew I had to use for today's post.


A few years ago, I ended up playing judge at a trial. Not a real trial, you understand, but a trial all the same. It was a few months after Harry Potter and the Half Blood Prince had been released, and I was knee-deep in the forums of HPANA. At the time I was involved heavily in a topic about Lily Evans (the mother of Harry), and we were discussing her unproved (at the time) relationship with Severus Snape, the ambiguous potions master of Hogwarts. Of course, we digressed a fair bit and ended up discussing Snape's involvement in the death of Albus Dumbledore. A fellow HPANAer came up with a suggestion that he should be put on trial, simply because we were undecided whether his character was mostly good, or mostly bad.

Of course, me being me, I ran away with it. Soon there was a shiny new thread called 'The People vs. Severus Snape', and we began recruiting members for the prosecution, the defence, and the all important jury. Looking back, I'm amazed at what actually happened after that. There was a surprisingly large amount of people who wanted to take part, and though I was of the opinion that most people thought Snape was 'bad', both teams were fairly even in numbers. The prosecution and the defence created their own threads to begin gathering their evidence, while the jury opened their own place to deliberate.

The trial attracted a high number of followers, and I happen to know that a few people joined the site specifically to take part in the discussions. The number of views that the thread amassed was extraordinary, and I seem to remember that another website even stole our idea (including the title itself).

Reading these books not only led to me finding a bunch of new friends, but also allowed me to participate in one of the most interesting debates I've ever come across. The character of Snape is a delicious one, and his intentions were never quite obvious until we neared the end of the series. We speculated, of course, but we never knew for sure. The Harry Potter series, for all its flaws (because as much as I love the books, they do have flaws) captured the imagination of so many people, enough to make quite a few of these people devote hours of their time to gathering and filing evidence, and writing rebuttals and whatnot.

What followed was several months of reading pages of evidence, mediating between the two (often bickering) teams, calming the ruffled feathers of almost everyone, and being amazed at the sheer amount of hard work that both the prosecution and the defence put into their evidence posts. We were tired, we were grumpy. We had to deal with homework, snooty co-workers, homesickness, and snivelly-nosed kids. But we all pulled together and soldiered on because we were determined to see things through to the end.

The character of Snape inspired loyalty from his supporters, and fierce opposition from his, er, opposition. How many characters from a novel can you name that would do that? It's not unique by a long shot, but neither is it an everyday occurrence. The power of the written word can inspire many things.

So yes, reading is not always about the reading. It's about what can happen afterwards. What will your story inspire people to do?

What the Hell, I'm apparently the first to comment. Either people have a hangover from yesterday, or are too busy writing on their novels.

My ambition is to complete my novel within 30 years more than 30 days, so I'm not in a hurry. My story will make people do really evil and funny things .. if anyone will ever get to read it. Anyway, I guess that's the vision of every writer, to write something that influence what people think and do >:)

I didn't finish the series but reading your posts almost makes me want to try again and see what I missed.

The Pen is mightier than the Sword is still relevant today....Words and stories have been used to keep cultures alive, bring about social change, inform, inspire and on and on...
I am not a novelist per se....My stories are drawn from real life...maybe I want to show others a different world - similar, yet not....

Cold As Heaven - Yeah, I think everyone is NaNo-ing. And yeah, most novelists have a secret desire to take over the world I think. *nods*

Sue - You should finish the series, absoulutely! There were a couple of things that weren't tied up properly, and a few little things that niggled, but on the whole JKR did a wonderful job. Snape's story is the best of all. *nods*

Songsnwords - Yup, definitely true about the pen/sword.There's some powerful stories out there, and the ones that stick with you stay with you forever I think.

Leannne - ha! Do you still have the Snape files? *ducks* Fun times...

Man, I was so convinced Snape was working both sides against the middle (DD vs. LV) so that he could end up the last man standing, so to speak...