Who am I? Friday: Double Dutch and Pumps 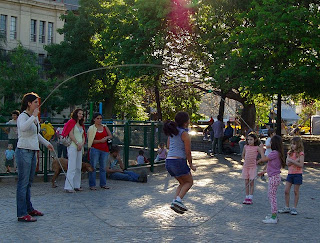 Bronx Stories: Playing in the Pump

I was ten years old in the summer of 1983. It was an extremely hot and humid summer day. You felt like you just wanted to melt into the street like freshly laid asphalt. I was sitting on the stoop of my building praying for a cloud to offer some shade from the oppressive heat. No such luck. It was, unfortunately, sunny with not a cloud in the sky.

I would usually play double-dutch. For those who don't know, it is when you jump with two ropes swinging towards each other in a rhythmic motion. There are two double-dutch turners on either end of the ropes, as pictured above. There was a double-dutch game I played called "D- I- S- H- Choice" This was chanted over and over while the person is jumping rope. When the person messes up and stops jumping (or trips on the ropes as I often did), you would have to perform whatever you landed on. For example, if you landed on "D" you just jump double-dutch as you would normally do. However, if you land on "I", you must pretend to lick ice cream as you are jumping rope. The letter "I" stands for ice cream.

Regrettably, it was too hot to play double-dutch. It was too hot to play "Tag" or "Catch and Kiss." One of the teenagers on the block borrowed his father's pliers and turned the fire hydrant on. It was a glorious relief to feel that cool water course down my body. We would get plastic bottles and fill them up, in an attempt to wet unsuspecting friends who came out of the building. One person took a metal can (like a soup can) and opened both ends. He then straddled the hydrant so that he could place the can over the water. He directed it into a beautiful arc that reached the steps of my building. It made a rainbow and I thought that I had never seen anything so pure and beautiful in my life.

After approximately an hour, the sun began to set. I was still playing in the pump (our ghetto term for hydrant) and was not paying attention. I went to cross the street and a station wagon had side swiped me leaving me dazed and sprawled on the asphalt in between two parked cars. A family friend, Hector, carried me to my third floor apartment and my mother lay me on the top bunk of my bunkbed. My legs were bruised and purple for days. What had begun as a great day turned into an unfortunate disaster. To this day, I wonder why my mother never took me to the hospital. I didn't break anything but it seemed like getting hit by a car warrants a trip to the hospital.

Tasks for DISH Choice, Criss Cross, All Around the World, Pop-Up
1. D= double dutch jumping
2. I= Ice cream licking while double dutch jumping.
3. S= Sleeping Beauty (close your eyes while jumping)
4. H= Hopping in place on one foot.
5. Choice= You pick the task
6. Criss Cross= cross your legs in and out while jumping rope.
7. All Around the World= hopping on one leg and rotating 180 degress at a time.
8. Pop Up= jumping straight up and down for as long as you can.

Posted by Shaharizan Perez at 12:00 PM

Email ThisBlogThis!Share to TwitterShare to FacebookShare to Pinterest
Labels: Chary Johnson, double dutch, playing in the hydrant, Who am I? Friday

We skipped Double Dutch, but I've never heard of the DISH choice. Catch and Kiss was called Kiss Chasey here. Thanks for jolting so many memories of other games we played, Queenie, Mr Wolf - it was good not having TV!
I agree, going to hospital after being hit by a car seems sensible, though she must have had a good reason for her decision.

Thanks Sue. I love reminiscing of childhood games like Tag, Red Light Green Light and hopscotch.

Your 'about you' is so much more elegant than mine--I think your mind works in these gorgeous 'scenes'... I almost wonder what I'm doing writing, that I don't think this way, but never mind--I love your urban tales. They are visceral...

Thanks Hart. I think my mind does work in these little vignettes. My memories are like little movie clips, kind of.

I quite liked your Who am I? You gave family background that I really identified with, having an alcoholic father and all.

One of my favourite pieces of writing, Chary.
The Friday feature is probably the nicest thing we came up with.

Thanks Rayna. I quite like the Who am I? Fridays. I get to know things about all of you that I never knew before. It is a great idea.

This is a great story, a slice of history.

Thank you Lynda. I suppose it is a little bit of the Bronx during the 1980's. Did I just date myself? :D