Last week, I found myself in Rural India. Not a place where I would normally find myself, but when you work for a non-profit stranger things happen. Calling the place a village may be a bit of an exaggeration - it was a hamlet of 17 homes, most of them little more than rude huts. And the entire population of the village could be captured in one frame - 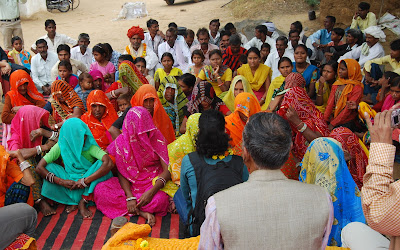 It was a village forgotten by progress. Where people were no better off than they must have been a century ago. Where livestock and farming were the the only livelihood options; both barely enough to keep people out of poverty.

But what you noticed most about the village was the fact that women outnumbered men almost two to one. It was not that every family in the village produced more girls than boys, it was just that the men had all migrated to the nearby towns and cities in search of work, leaving the women behind. 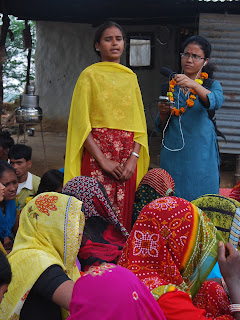 And a highly articulate bunch of women they were.

There was the 17-year-old girl who had been forced to drop out of school in Grade 8, because she needed to take care of her sick mother. The girl had a better grasp of the problems facing her village than any other person of her age, and she was willing to try out new ideas that might bring increased prosperity.
"What is your deepest desire?" I asked her.
Pat came the answer - "I want to continue my studies, and do something that improves the quality of life in the village."
She clearly knew where her priorities were. 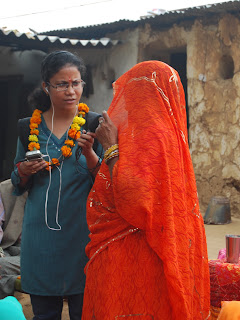 There was the grandmother of indeterminate age who had got her friends together to form an Emergency Fund. All the women contributed Rs. 100 ($ 2.50) a month to the Fund, which they would dig into in case of medical emergency, to fund small community driven projects, and to meet various contingency expenses. The lady didn't need much prodding to stand up and explain why the women had decided to create the Fund. "There is no way we can predict when we will need money," she said. "And when we need money, nobody has any to spare. This way, we each put away a little bit when we can, and we can all benefit." Was she encouraged by stories of the Microfinance Revolution? She'd never even heard of it, and couldn't be too bothered by it either. Her solution was to take care of a specific problem - it if corresponded to a type, she was not particularly bothered about it.
Would she consider entering local politics?
Why should she? What would politics give her that she did not already have?

The women brought home the fact of the Girl Effect better than many slickly produced videos. Enable women, and you can change the world. And if it takes a video to get that message across, I am more than happy to give it screen space -

omg, Rayna! This is a fantastic post. These women are amazing and their basic instinct to protect each other and better their small "family" is so inspiring. BIG kudos to you for what you're doing to shine a light and help them. All the best to them~ :o) <3

Is there any way we can help?

Natasha- this was AMAZING! Loved the post, the info, the idea. Really and truly fantastic... off to share it with the world *cough*

FYI--I just shared links and included the Hashtag #girleffect on Twitter--the page was full with the oldest post only 20 minutes old--this is a hot topic.

I saw the Girl Effect on Oprah a while ago. Very inspiring. Thanks for sharing this, Rayna!

Love it. What a great post. It's important to remember others - about the problems going on outside the little bubble created in our own lives. Thanks!!! =D

Wow, such incredibly strong and thoughtful women. Thanks for the post.

@ Leigh- one of the biggest changes that I see happening in the social sector is the number of organisations that are working on smaller community led interventions. That is the best way to bring about change, and change is starting to happen.
There doesn't seem too much that we can do (in fact, during the visit to the village, I was asked to address the people, and had nothing to say that they had not already figured out), except perhaps monetarily support organisations that are working with women in communities.
That and sensitising the world.

@ Hart- if my intention was to advocate the cause of empowering women, I couldn't have found a better champion than you.
It is a great cause, and one that really resonates with many people, because it is so simple.

@ Kassy- it is, isn't it? I saw the video a long time back, but when I met these ladies, I realised they were the dots in the video.

@ RaShelle- if we even realise we are living is partial bubbles, that is good enough. All many of these women need is role-models somewhere, so they have something to aspire to. I haven't been through any of what they have, but more than one woman told me that she was going to make sure her daughter became "like" me. Personally, I think they are much better than me.

@ Chary- somehow, I picture your grandmother as one such woman. She must have been, you know.

Good one, Rayna! I have noticed this earlier too.. that in rural india, it is the women who take things into their own hands.. i was travelling from delhi to kathgodam by train and met a bunch of women who are bent on improving their condition and their village... they had come together by themselves and were taking steps.. this brought them to the notice of an ngo who sponsored them for a women's conference in goa from where they were returning.. and they said, "we noticed that in the city the men spoke more and took the decisions..it is not so in the village for it is the woman who actually does the work, so she is the one who makes the decisions. if we want to improve things, it is the woman who has to make the decisions, for a man thinks only of himself, while the woman thinks of the family" I was really impressed by these 'uneducated' women and their spunk!

@ Anu- that is a wonderful distinction you bring up. In a lot of ways, I guess the woman in the village is more empowered than her urban cousins.